You are here: Home / Books / Book Reviews / Poppy Mayberry The Monday Book Review
Thanks for sharing!

Welcome to the Blog Tour for Poppy Mayberry, The Monday!

What if your teacher could read your mind just because she was born on a Thursday? Or the kid next to you in class could turn back the clock just because he was a ‘Wednesday”? In the quirky town of Nova, all of this is normal, but one thing is not—Poppy Mayberry. As an almost-eleven-year-old Monday, she should be able to pass notes in class or brush her dog, Pickle, without lifting a finger. But her Monday telekinesis still has some kinks, and that plate of spaghetti she’s passing may just end up on someone’s head. And if that’s not hard enough, practically perfect Ellie Preston is out to get her, and Principal Wible wants to send her to remedial summer school to work on her powers! It’s enough to make a girl want to disappear…if only she were a Friday.

My Review of Poppy Mayberry, The Monday

Poppy Mayberry, The Monday is an adorable Middle Grade book that is filled with magic and fun. In Poppy’s town, the day you’re born on determines the magical ability you will have. I was born on a Sunday….sadly that means I have no magical abilities. If I had to pick one of the abilities to have, I am pretty sure I’d want the ability to teleport. I could go to Disney World any time!

You and your young reader will love this book. The characters are really well written, and it is easy to imagine that their school adventures are real. The plot moves quickly, and it is full of excitement and magic that your child will love. You can read an excerpt here. I highly recommend this book! 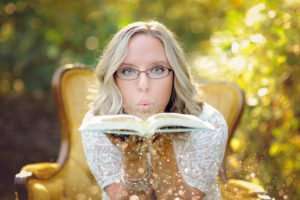 Jennie K. Brown is a high school English teacher by day, freelance magazine writer by night, and middle grade/young adult author by late-night and weekend. When she isn’t teaching or writing, Jennie can be found reading a good book, traveling, or spending time with her awesome husband, amazing son and super-spoiled Yorkie. In 2010, the National Council of Teachers of English (NCTE) named Jennie the Pennsylvania English teacher of excellence, and she currently serves as President of the Pennsylvania Council for Teachers of English and Language Arts (PCTELA). She is also an active member of SCBWI, NCTE and ALAN.