You are here: Home / Books / The Legend of the Pumpkin Thief by Charles Day | Middle Grade Book
Thanks for sharing! 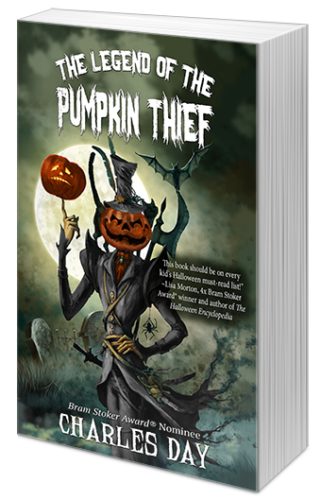 The Legend of the Pumpkin Thief

As the townsfolk sleep, something creeps into the neighborhood. Hidden in shadows, its presence is as old as time itself, its intent not born of goodness.

Nick, a teenager who fancies himself a detective, wakes to find his carved masterpiece missing. Now a mystery is afoot, and Nick has his first assignment, to find out who or what is snatching up the town’s pumpkins and why.

Unfortunately, as with all great detectives, obstacles stand in Nick’s way—the neighborhood bully and his cronies, and the strange old lady and her dog who share the run-down house at the end of Nick’s block. As Nick investigates, an urban legend unravels . . . .

The Legend of The Pumpkin Thief.

Nick fears the legend as he embarks on the most dangerous adventure of his young life. Collecting clues, getting ever closer to the true nature of evil, he learns that curiosity comes with a high price.

Charles Day is the Horror Writer Association’s Mentor Program Chairperson. He’s the Co-Chair for the NY/LI Chapter and a member of the HWA Library committee.

He is also the Bram Stoker Award® nominated author of the YA novel, THE LEGEND OF THE PUMPKIN THIEF. He’s also published his first adult novel DEEP WITHIN and the first book in his Adventures of Kyle McGerrt trilogy, a YA western heroic fantasy, THE HUNT FOR THE GHOULISH BARTENDER, and his first co¬authored novel with Mark Taylor, REDEMPTION

His forthcoming publications and projects in development for 2014 include a comic book series based on the ADVENTURES OF KYLE McGERRT trilogy, his first middle¬ grade series, THE UNDERDWELLERS, and his third YA novel, IMMORTAL FAMILY.

On the publishing business side of things, Charles is the owner of Day Media and Publishing in New York, which houses the successful imprints, Evil Jester Press, Evil Jester Comics, and Hidden Thoughts Press (mental wellness collections,)

He’s also an artist and illustrator, who is passionate about creating the many characters he’s brought to life in his published, or soon to be published works. You can find out more by visiting his Facebook page: https://www.facebook.com/charles.day.92

Thanks for sharing!
« Waves of Mercy by Lynn Austin Book Review
Guardians of the Galaxy Vol. 2 Teaser! #GotGVol2 »