You are here: Home / Books / Book Reviews / The Battles of Tolkien by David Day
Thanks for sharing!

Disclosure: I received this book free for review. All posts may contain affiliate links. 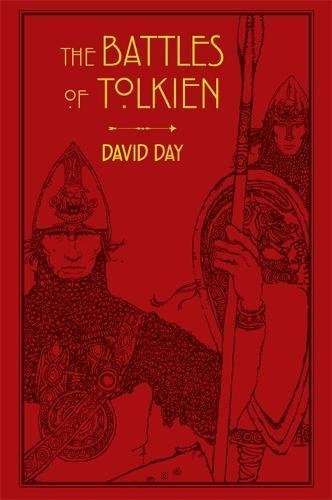 The Battles of Tolkien

The history of J. R. R. Tolkien’s fictional world of Middle-earth is filled with epic battles in an ongoing struggle between good and evil. The Battles of Tolkien recounts many of the greatest conflicts over thousands of years, from the earliest skirmishes of the Valarian Ages to the defining battles in the War of the Ring. Insightful commentary by Tolkien scholar David Day discusses how the people, tactics, and weapons influenced the outcome of each battle, and also how the legends of Middle-earth relate to the real-world mythology on which Tolkien based his famous literary creation. Maps and full-color illustrations help bring this rich universe to life, making it an invaluable reference book for Tolkien fans of all ages.

If you are a fan of J. R. R. Tolkien, The Battles of Tolkien is a book you will want to add to your collection. My daughter took a college class last semester on Tolkien and Lewis, and she was so excited to share this book with her classmates and professor. It was so interesting to hear her talk about the things she was learning in her class, and this book fit in really well.

You can tell that the author is an expert in the all things Tolkien by what he chose to share about the battles. It is enough information to not be overwhelming, yet the true fans will appreciate having a book with the facts about the battles in one book. I love the illustrations and maps included in this book.  The book is divided into six parts dealing with the different ages and the battles within each.

The Battles of Tolkien would make a great gift for any Tolkien fan.

David Day was born and raised in Victoria, British Columbia. He is a poet and author who has published over 40 books of poetry, ecology, history, fantasy, mythology and fiction. David Day’s books – for both adults and children – have sold over 4 million copies worldwide and were translated into twenty languages.

​After high school, Day divided the next decade between work in logging camps and study at universities. His first book of poems, The Cowichan (based on his timber camp journals) was published in 1975, and he graduated from the Department of Creative Writing at the University of Victoria the following year.

He was writer in residence at the Aegean School of Fine Arts in Paros, Greece, and worked for the Canadian Publishers McClelland Stewart in Toronto. He has subsequently travelled extensively, and lived in England, Greece, Spain and Canada. He currently lives in Toronto, Canada.

In 1978, he published A Tolkien Bestiary, the first of his six best selling books on the works of J R R Tolkien. In 1981, his Doomsday Book of Animals was a ‘Book of the Year’ selection for Time Magazine, New Scientist, Los Angeles Times and The Observer. And in 1984, Day wrote Castles, the first of five books in collaboration with the Academy Award winning artist, Alan Lee.

In 1986, The Emperor’s Panda was runner-up for the Governor General’s Award and the National Library Award, and was adapted for stage by the Toronto Young People’s Theatre. That year, his poems were prize winners in the CBC National Poetry Competition.

Through the 1980’s and 1990’s, Day was also an environmental columnist for Britain’s Daily Mail, Evening Standard, Sunday Times and Punch magazine.

After the 1996 publication of his Quest For King Arthur, David Day was commissioned by the Birmingham Royal Ballet as dramaturge for the epic two-part ballet, Arthur I and Arthur II (2000).

David Day has also written for theatre and television. His 100 part Lost Animals TV series (narrated by Greta Scacchi) was commissioned by the Knowledge Network in US, Channel 4 in UK and NHK in Japan – and later translated into 18 languages. He has worked as creative adviser for Toronto’s Hall Train Studios’ multi-media museum exhibitions.

Check out all of the author’s works on his Amazon page.
​
Thanks for sharing!
« Keep Your Home Safe This Summer
A Tiny House, Sustainability, and Trail Mix: Get Back to the Basics »