You are here: Home / Books / Nice to Come Home to by Liz Flaherty | Clean Romance
Thanks for sharing! 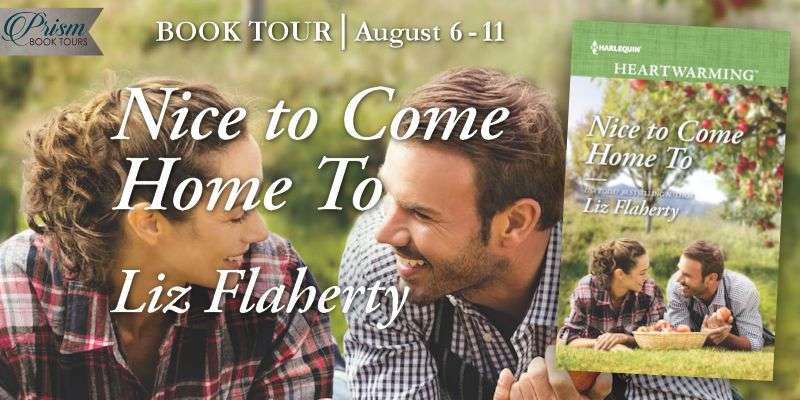 Nice to Come Home To

by Liz Flaherty
We hope you enjoyed the tour! If you missed any of the stops
you can see snippets, as well as the link to each full post, below.

Thank you so much for joining me on the debut ride for Nice To Come Home To. It’s the third book in a mini-series from Lake Miniagua, and Cass and Luke’s story was such a satisfying one to tell. I have to admit I got a little selfish in the writing of it…

I hope you enjoy the trip with me this week. There will be giveaways, excerpts, some blog posts where I hope you join in the conversations, and…did I mention giveaways?

Nicole’s Book Musings -Review of Nice to Come Home To

“I really enjoyed this book. It’s a make you feel good book. The story was great and had me eagerly gobbling up this book. It had it’s funny carefree moments, but also serious hit you right in the heart moments. . . . All the characters are well written and makes you want to be part of this little town.”

Cass Gentry writes a cozy mystery series and has spent most of her adult life in California. Although she played volleyball in high school, that was twenty years ago. She’s not a country girl—much less an outdoorsy one, but when her mother dies, Cass inherits half of an apple orchard on Lake Miniagua, Indiana…

Reading is my SuperPower -Review of Nice to Come Home To

“Another great contemporary (clean!) romance from Liz Flaherty, set in the quaint Indiana town of Lake Miniagua. I loved watching Cass and Luke’s relationship move from business colleagues to a sweet friendship to something even sweeter. Great characters, a beautiful setting, and humor as well as heart abound – not to mention the gentle message of accepting yourself, flaws and all, and accepting the painful parts of your story with grace and self-forgiveness.”


The voice came as he was locking the door of the apple barn behind him. He turned, squinting into the setting sun. “Yes? We’re closed, but can I get you something quick?”


“Oh.” The sun moved enough that she became less of a silhouette and more of the tall, slender person he remembered from Marynell’s funeral. She wasn’t as slim now, and the cap of light brown hair was almost certainly her own, but he’d have recognized her anywhere. He extended his hand. “Nice to meet you. I expected you earlier today.”

Remembrancy -Review of Nice to Come Home To

“Liz Flaherty brings this series full circle. Don’t worry, if you haven’t read the other two books, you won’t be lost, but if you have, Nice to Come Home To is that much sweeter. As Cass learns that some friendships survivor tragedy, that family is what you make it,and that accepting herself—flaws and all—is the only way to live fully. And maybe, just maybe, falling in love isn’t something to fear.”

Among the Reads – About Brothers and Sisters and Teenagers

The only teenagers I raised were the ones I’d known since birth, whose diapers I’d changed and whose personalities I’d had something to do with and who I loved more than I ever thought it was possible to love anyone…

“Nice to Come Home To by Liz Flaherty is a wonderful read. . . . This book touches so many emotions and heartfelt situations. I thoroughly enjoyed getting to know Royce, Cass, Zoey, Lucas, and Seth. These characters are all absolutely wonderful and each have their own story to tell.”

Cass beamed, her eyes lighting. The expression opened a place in him he’d thought was permanently closed. Oh, boy. “I love the orchard, and I love everything you’ve done to it.”


Encouraged, he asked the question that had lingered uppermost in his mind since they’d toured the orchard earlier in the day. “Do you know what you’d like to do? Stay a silent partner like your mother was? Sell out? I don’t have the money, but having a financially savvy brother-in-law has ensured I have good credit.”


It was as if he’d slapped her. The light left her eyes and her beam faded to a polite smile. She started to speak, then stopped, turning her head to gaze out at the lake. Spangled with moonlight, starshine and colored lights on boats cruising the calm water, it was a good thing to look at. Calming and exhilarating at the same time.


What had he said? Whatever it was, she was neither acknowledging nor answering.

Splashes of Joy -Review of Nice to Come Home To

“Cass and Luke’s story is a beautiful and heartwarming one. I enjoyed watching the two work closely together, attractions were noticeable, but they were so determined to not fall in love. . . . I appreciate so much that this is a good clean, fun, and enjoyable book to read!”

“Tell me again why we can’t just have the coffee shop in the center corridor of the barn. It’s plenty big enough and access is right there from both entrances. That leaves the side areas for offices or even other little shops if this thing takes off.” Luke looked both tired and impatient. And on the edge of angry.


Cass wasn’t good at standing her ground—it wasn’t something that had ever worked particularly well for her. But… “Because the coziness factor would be gone. It would never be quiet or intimate or conducive to working.” She had said all this. She knew she had. Who knew that under that straight, silky hair of his, Luke Rossiter had such a thick head?

Britt Reads Fiction -Review of Nice to Come Home To

“I really enjoyed this sweet story. There are other stories related to this one, all set in this quaint community. However, the author did a really good job of making this book readable as a stand alone. I had not read the other stories and had no trouble diving into this one.”

I’m not much for having ideas. I mean, I like the idea if having them, but I think when the Lord was wiring my brain, He gave me frizzy hair instead of ideas—that’s all I can figure. Naturally enough, one of the most frequent questions a writer is asked is, “Where do you come up with your ideas?”

Er…what ideas would those be?

But with Nice to Come Home To, released this month from Harlequin Heartwarming (squealing and jumping up and down here—aren’t you glad you can’t see the frizzy hair?), I can pinpoint the idea trail. Want to come along?…

Book by Book -Review of Nice to Come Home To

“So, if you’re in need of a heartfelt contemporary romance to read, check out Nice to Come Home To. I enjoyed experiencing the ups and downs with Flaherty’s immensely likeable characters and smalltown community, and I’m sure you will, too.”

Characters, and the development thereof, are my favorite parts of writing books. They usually come to me pretty fully developed, scars and all, long before I know their stories. This is fun.

Thoughts of a Blonde -Review of Nice to Come Home To

“An emotional rollercoaster that will leave you smiling! This story was quick to draw my attention with it’s in depth details of what each character is feeling as the setting is laid out. We get not only the potential romance of Cass and Luke, but also several feel good moments between the older characters and with the teens. It’s a complex story with many pieces pulling at our hearts, but it comes together well. Memorable, sweet and very enjoyable. Loved it!”

My Life, Loves and Passion – Excerpt

A kissing kind of day…

Luke’s distinctive rap came on the door at that moment, and the women laughed as Cass went to open it. He called, “Evening, Zoey,” and pulled Cass onto the porch, wrapping his arms around her. “This is probably wrong on so many different levels, but I can’t care right now. It’s a kissing kind of day.” The last words were murmured against her lips, and all she could do was swallow a sigh.


They’d avoided physical contact beyond the occasional one-armed hug, even though they’d talked all around the subject. The conversation always ended with the assertion that neither of them was interested in dating anyone, much less someone they were in business with. If they got a little hormonal, well, that was just the way it was. They were adults, after all—they could handle themselves. Besides everything else, they were in charge of two teenagers whose hormones made their own look like rank amateurs.

My Devotional Thoughts – Review of Nice to Come Home To

“I did enjoy and connect with the two main characters–Cass and Luke. Both are a little bit older and have been married before. That already made them more interesting and relatable to me. The story was sweet with a little conflict here and there, but never more than what the reader would want.

…I highly recommend this book to anyone looking for a solid romance with heart, soul, and lightheartedness.”

It’s All About the Romance – Breast Cancer

Thank you so much for having me to visit!

Breast cancer has affected my life. I lost my mother to it, my friends Dottie and Inge, and others. I have friends who are fighting it now. When you read Nice to Come Home To, you won’t see their names in the dedication—that happened years ago when I wrote One More Summer—but the disease still attacks. All too often, it still wins…

When Cass finds out where the music is…

Later that day, walking through the orchard with Misty keeping her company, Cass looked through the branches of a pear tree, loving the picture the nearly leafless limbs made against the pale blue sky.


She eyed the tree trunk where it divided. It made her wish she had one of the orchard’s ladders out here. It had been a while since she climbed a tree just for the sake of climbing it. The last time had probably been when the volleyball team camped near the creek at the back of the Worths’ farm.


There weren’t enough leaves left on the tall Bartlett pear tree to offer the whispering accompaniment to her thoughts she remembered from those days, but still…it had been a while. 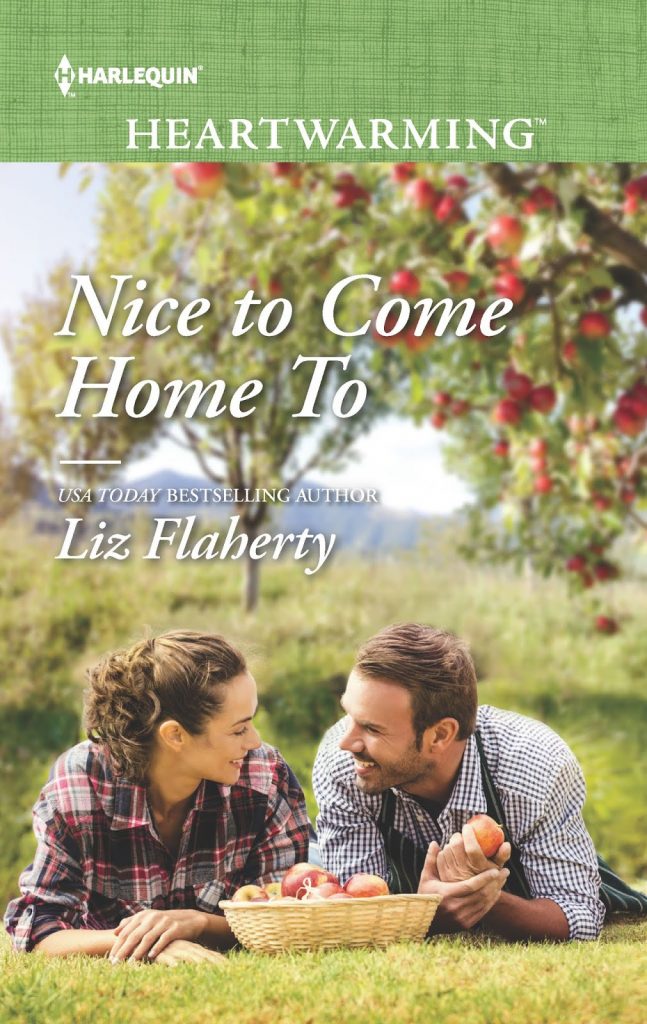 Nice to Come Home To

Will an apple a day…

For Cass Gentry, coming home to Lake Miniagua, teenage half sister in tow, is bittersweet. But her half of the orchard she inherited awaits, and so does a fresh face—Luke Rossiter, her new business partner. Even though they butt heads in business, they share one key piece of common ground: refusing to ever fall in love again. But as their lives get bigger, that stance doesn’t feel like enough… 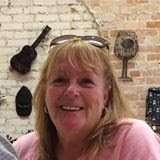 Liz Flaherty was a little nervous about retiring from her day job, but making quilts, more family time, traveling at the mere mention of “why don’t we go…” and becoming a Harlequin Heartwarming author have made the past years more fun and exciting than she could ever have imagined.
Website│Blog│Goodreads│Twitter│Pinterest

Thanks for sharing!
« Slaughter Race and Shank | Take a Sneak Peek at Ralph Breaks The Internet #RalphBreaksTheInternet
Paddlefest and Downtown Throwdown in Parkersburg, WV Sept. 14-16 | Get a Coupon Code Here »