You are here: Home / Books / Pirates Don’t Go To Kindergarten Book Review
Thanks for sharing!

Is your little one hesitant to leave the comfort of the grade (and teacher!) they know and love to head to a new classroom? Then Pirates Don’t Go to Kindergarten is the book for you! It’s so cute, that even if you don’t have a child like that, you need it anyway! 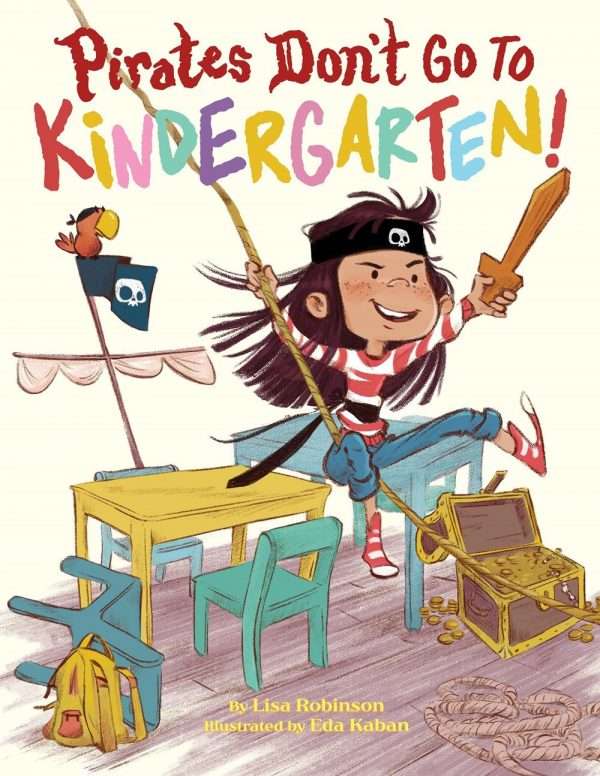 Pirate Emma is about to start kindergarten! But Emma’s not so sure she’s ready for a new captain and crew. Especially since Cap’n Chu—(that is, Ms. Chu, her preschool teacher)—is right down the hall. So Emma decides to head back to her preschool class to see if she can stir up a mutiny against kindergarten. Is that what she really wants? Or does she just miss her beloved teacher?

Needless to say, Emma is not thrilled when she is taken to the Kindergarten room where they’re not pirates but astronauts and exploring space. She’s especially not thrilled with her new “captain.” Emma stages an escape…more than one. Will she ever stay in the space station? Will she forever be a pirate? Find out when you read this book with your little ones.

You’re whole family will love this story and the cute illustrations that bring it to life.

Lisa Robinson was born in Kampala, Uganda, to volunteers of the Peace Corps who later became world-traveling diplomats. When she was a child, her family moved frequently, so books became her best friends. She now works as a psychiatrist and writer. She holds an MFA in creative writing for young people from Lesley University. Pirates Don’t Go to Kindergarten! is her debut picture book, and she has more books forthcoming, including Pippa’s Night Parade, illustrated by Lucy Fleming. She lives in Massachusetts with her scientist husband, two daughters, and three cats. Learn more at her website, or on Twitter: @elisaitw.

Eda Kaban was born and raised in Turkey. Her travels brought her to the United States, where she studied illustration. Her work can be seen in galleries from San Francisco to New York and in a variety of publications. Eda’s recent children’s books include We Are Brothers, We Are Friends by Alexandra Penfold and Pink Is for Boys by Robb Pearlman. Her illustrations have been recognized by the Society of Illustrators, Creative Quarterly, American Illustration, and 3×3. She lives with her husband and their two Siamese cats in Oakland, California, where they continually water their plants too much. Learn more about the artist at www.edakabanstudio.com.

Thanks for sharing!
« Manifest: The Complete First Season Is on DVD
Impressive and Fun Facts about Wine »