Last Pen Standing, first in the Stationery Shop cozy mystery series, follows amateur sleuth Delta Douglas. Delta works to solve a murder committed at the hotel where she and her friend Hazel are holding their first crafting workshop together. 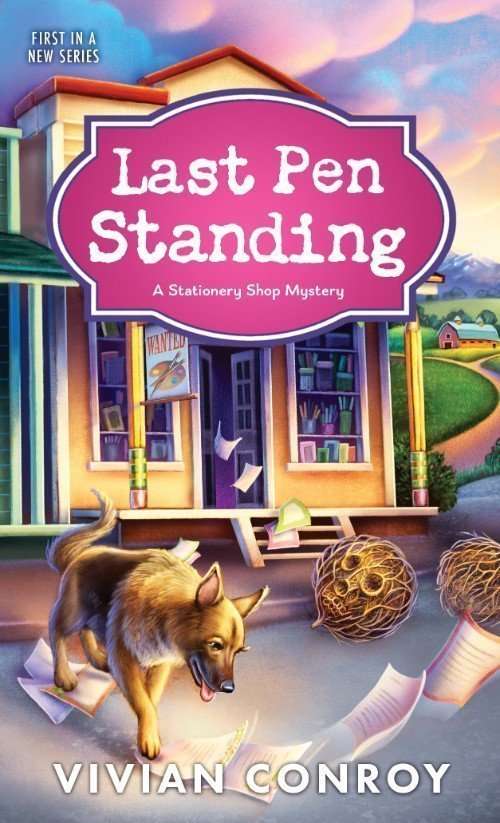 I received Last Pen Standing free to review. I did not have to leave a positive review or a review at all if I chose not to. This post contains links from which I may receive a commission if you make a purchase.

As the new co-owner of Tundish Montana’s stationery shop WANTED, Delta knows how to organize a killer crafting event. Creativity and cardstock are all she needs to move one step closer to her ultimate dream: developing her own line of crafting products. But on the night of the workshop, at the swanky hotel venue, glitter isn’t the only thing found sprawled on the floor. A hotel guest is discovered dead in the bar, and amid the confusion, Delta’s best friend is suspected of the crime.

Enlisting the help of her Paper Posse and Spud, her canine sidekick, Delta dives into the investigation. But with many high-powered suspects on the line, Delta soon realizes her sleuthing may come with deadly consequences.

Will this paper trail run cold before Delta finds the real killer?

That old sheriff’s office is why Delta has moved to Tundish. It’s now a stationery shop called WANTED, and she’s become part owner with her best friend from college, Hazel. The mystery begins at WANTED’s crafting workshop which is being held at The Lodge Hotel. The workshop goes well, but as things are wrapping up, a dead body is found! Delta gets involved in the crime solving because the accused is Hazel’s brother, and Hazel is taken in by the sheriff too since she lied for her brother.

The first half of Last Pen Standing was a little slow for me, but once the action started picking up, it held my interest more. There was one character who endeared herself to me – Mrs. Cassidy. She’s a part of the Paper Posse who frequent WANTED and its crafting workshops. Since this is the first book in the series, having a lot of characters in the story didn’t allow me to get to know them as individuals very well.

Something that bothered me was the way that Delta talks. It’s way too formal. She’s young! I don’t even talk as formally as she does. For example, “I’ll have the peppered beef wrap. That will have a nice strong flavor I can then douse with my iced tea.” And that’s just one instance. I hope that the following books have Delta chill out more.

My favorite part of Last Pen Standing is WANTED. Though I’m not an artist or crafty in anyway, I think it would just be a fun store to browse through. I’m looking forward to “seeing” more of the town and reading about the next crime the Paper Posse helps solve.

Thanks for sharing!
« How to Maintain Your Cat’s Litter Box
Get Ready for Fire Prevention Month with These Deals »