You are here: Home / Entertainment / Celebrate the Swan Princess 25th Anniversary – Out on Blu-Ray and 4K HDR on 10/29
Thanks for sharing!

What are some things that make you feel old? For me, it’s when I realize how long ago certain songs and movies released. One of my (Molly) favorite movies as a little girl was The Swan Princess, and it just celebrated its 25th anniversary! In celebration of this milestone, Sony Pictures Home Entertainment is making this classic available on Blu-Ray and Digital 4k HDR. You can bring home this remastered classic now. 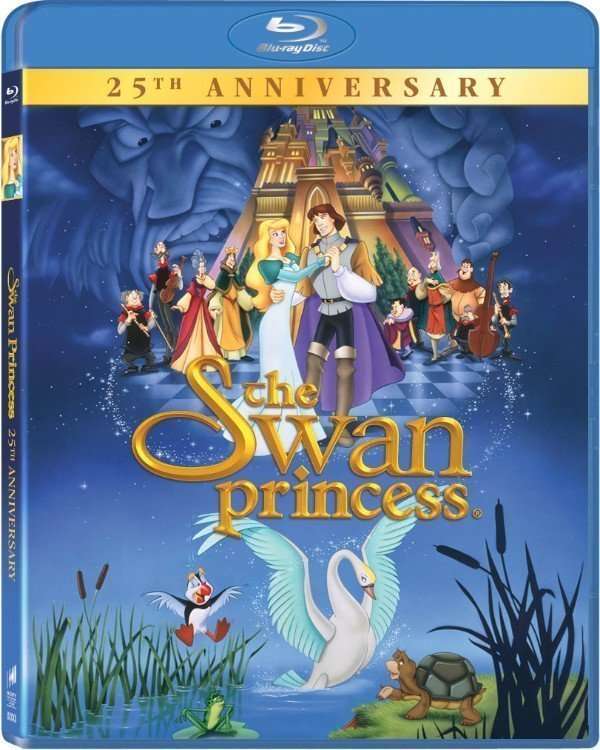 I received a free copy of this movie; however, all opinions are mine.

If you’re unfamiliar with The Swan Princess, have No Fear! (And if you are familiar with it, I hope you got that reference!)

“THE SWAN PRINCESS, a magical, musical animated adventure based on the classic fairy tale “Swan Lake” has captured the hearts of audiences around the world. The winner of the Film Advisory Board Award of Excellence and the Parents’ Choice Award, it’s the heartwarming story of the beautiful princess Odette, who is transformed into a swan by an evil sorcerer’s spell. Held captive at an enchanted lake, she befriends Jean-Bob the frog, Speed the turtle and Puffin the bird. Despite their struggle to keep the princess safe, these good-natured creatures can do nothing about the sorcerer’s spell, which can only be broken by a vow of everlasting love. THE SWAN PRINCESS is bursting with color, dazzling animation, beautiful music and the vocal talents of Jack Palance, John Cleese, Steven Wright, Sandy Duncan and Michelle Nicastro.

The 25 anniversary Blu-ray release includes an all-new featurette entitled “A Look Back, Tease Ahead,” plus a variety of additional archival features.”

The Swan Princess was just as much a part of my childhood as any other princess movie. I remember playing pretend with my cousin, and fighting over who got to be Princess Odette. My cousin had a little golden heart necklace that I was SO jealous of because it looked just like the one Princess Odette wears. I still have all three original movies on VHS, the soundtrack, a mini Princess Odette toy, and a poster that I used to have on my closet door. I’m so excited to add the remastered Blu-ray to my collection!

The Swan Princess: Not Just a Princess Movie

The Swan Princess is so much more than a princess who needs a prince to help break a spell. It’s about friendship. It’s about persevering. Odette finds it so repulsive that Prince Derek wants to marry her because she’s beautiful that she turns him down. (“How to offend women in five syllables or less.”) Not to mention, rather than giving in and marrying Rothbart, she endures his curse to turn into a swan, and rather than accepting her fate, she fights back every way she can. Princess Odette doesn’t let what’s happened to her harden her, and she remains hopeful and kind throughout her ordeal.

Odette doesn’t have to face her curse alone. She is accompanied by Puffin the puffin, Jean-Bob the frog, and Speed the turtle. All three play an important role, not just for comedic relief but also in Odette’s outlook. Many people can learn a valuable lesson about friendship through these lighthearted characters. They stick by Odette’s side and fight just as hard as she does to break Rothbart’s spell. Puffin, Jean-Bob, and Speed are great examples of what to look for in friends. They love Odette for who she is and stick with her through thick and thin. Odette might need a vow of everlasting love to break her curse, but she needs the love of friendship to survive the curse.

In addition to The Swan Princess, I also own its first two sequels, Escape from Castle Mountain and The Mystery of the Enchanted Treasure, on VHS tapes. Both movies do an excellent job of continuing the adventure. The third movie was released in 1998, and it was the conclusion of the series until 2012 when The Swan Princess Christmas released. Following, A Royal Family Tale; Princess Tomorrow, Pirate Today; Royally Undercover; A Royal Myztery; and, most recently, Kingdom of Music. The latest installments follow Odette’s and Derek’s adopted daughter, Alise, in addition to our original heroes. I am sure that I would have loved these additions when I was a little girl! The newest chapter of The Swan Princess includes a musical competition and a prince cursed to live as a dragon.

“In the newest film in the series, THE SWAN PRINCESS: KINGDOM OF MUSIC, our favorite princesses are back in an all new feature-length musical adventure. Princess Odette is hosting a music competition to celebrate Princess Alise’s birthday – the winner will sing at her grand birthday ball! Prince Li of Cathay has entered, but his sister Princess Mei Li has stowed away on his ship to seek help from Odette and Derek for Chen, who has been cursed to live as a dragon. Lucas and Alise are reunited but Prince Li’s arrival makes Alise doubt her feelings. While Li and Lucas fight for Alise’s heart, Derek and Odette try to help Mei Li and Chen break the curse. Who will win the music festival and will Chen ever be free from his curse?

Included with the Kingdom of Music DVD are interactive sing-alongs featuring two all-new toe-tapping tunes from the film and a behind-the-scenes featurette that explores how the world and characters of the film were brought to life.”

The Swan Princess: Kingdom of Music is available now!

Celebrate 25 years of The Swan Princess with this free downloadable activity page!

Thanks for sharing!
« A Cinderella Story: A Christmas Wish Is Magical
Home Updates and Why They Are Important »