You are here: Home / Books / Black Cat and the Secret in Dewey’s Diary by Elaine Faber Book Review

Black Cat and the Secret in Dewey’s Diary:
A Tale of History, Mystery, Riddles, and Gold. 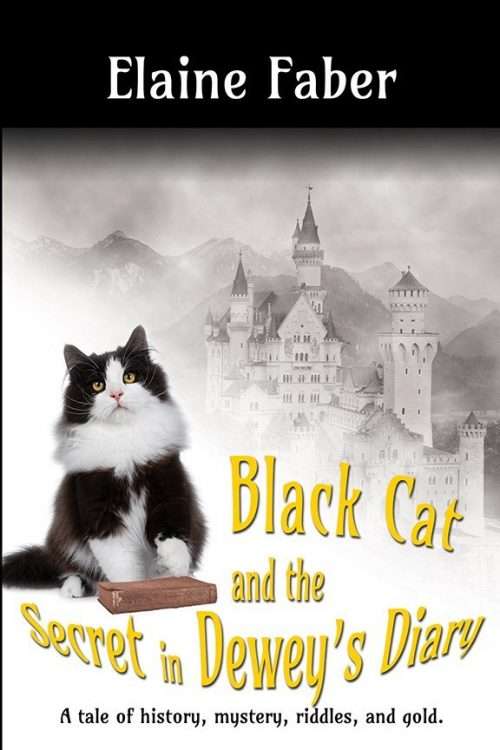 In this dual tale of mystery, lost treasure, and riddles, while Black Cat narrates the exciting events in Fern Lake, Kimberlee discovers a cryptic clue in a diary about a hidden treasure, and heads to Austria to solve the puzzle.

When Kimberlee and Dorian arrive in Austria, they attract the attention of a stalker determined to steal the diary in hopes the clues will lead him to the treasure first. On a collision course, it is inevitable that Kimberlee and the stalker meet in Hopfgarten.

Black Cat and Angel’s lives are endangered with the arrival of Kimberlee’s grandmother in Fern Lake, and the return of a man presumed dead for twenty-five years. With both arrivals, emotional and financial difficulties loom for Kimberlee’s family. Since their return to Fern Lake, Angel seems reluctant or unable to adjust to her new home. Does she regret leaving Texas and Grandmother? And, when the opportunity arises, will she decide to leave Black Cat and Fern Lake?

With Black Cat and The Secret in Dewey’s Diary, you get two mysteries in one. Kimberlee happens upon one of the mysteries when she receives a WWII diary that she didn’t order. Though she’s ready to count it as a loss, Black Cat senses that there’s something in it that Kimberlee needs to see. And what she finds, leaves her intrigued. A hidden treasure and hints about where it is are contained in the diary. However, the treasure is across the globe in Austria. As luck would have it, Kimberlee’s friend Dorian has a work trip in Germany and an extra ticket. I really enjoyed the author’s descriptions of the scenery that Kimberlee saw during her unexpected trip to Germany and Austria. I also liked the way that this particular mystery was resolved.

The mystery in Fern Lake actually consisted of several small crimes and a suspicious death. I think the smaller crimes were supposed to throw us off, and the suspicious death left me questioning Kimberlee’s character since she treated the victim in such a bad way. Through the book, we do see that there were past incidents that must have led to her attitude, but given the fact that she’s so sweet to everyone else and so mean to an elderly lady was a little off-putting.

I like how Black Cat gives people nudges toward clues and alerts them to danger. He and another cat, Angel, talk to each other, but they don’t actually talk to humans. Two of my cats are always talking to each other, and I wonder what they talk about!

I did like the plot line that led Kimberlee to Europe, and I wish more of the book had to do with that rather than the other story. Too many unconnected crimes and mysteries were happening in Fern Lake, and it made the story feel disjointed to me.

I’m hoping that in the following books, one mystery will be given all of the attention. I like following the clues and solving the mystery along the way. It was more difficult to do that with everything that was happening. My favorite parts were definitely the way the author described the settings in the books. If you enjoy books with cats, you should give this series a try. I’d recommend starting with book one since the characters and discussions in this book are tied to the prior ones. 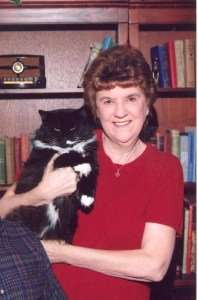 Elaine Faber lives in Northern California with her husband and feline companions. She is a member of Sisters in Crime, California Cat Writers, and Northern California Publishers and Artists. Elaine volunteers with the American Cancer Society Discovery Shop. She enjoys speaking at public venues, sharing highlights of her novels. Her short stories have appeared in national magazines and multiple anthologies.

Black Cat and the Lethal Lawyer. Thumper accompanies his family to a Texas horse ranch where they confront wild horses, embezzling, false identities and attempted murder.

Black Cat and the Accidental Angel. Black Cat and his companion are left behind following an MVA. Taken in by a family facing personal and financial disaster, Black Cat and Angel encounter danger and a spiritual encounter.

Mrs. Odboddy-Undercover Courier. Mrs. O carries a package by train to President Roosevelt that she presumes are secret war documents. She is equally sure Nazi spies are after her package and will to anything to deliver the package to the president.

Mrs. Odboddy-And Then There was a Tiger. Falsely accused of various crimes, Agnes sets about to restore her reputation and missing war bond money.

Escape With Dollycas Into A Good Book – CHARACTER GUEST POST