You are here: Home / Books / Death on Windmill Way by Carrie Doyle | Book Review
Thanks for sharing!

The first book in A Hampton Murder Mystery series is perfect for fans of Louise Penny and Denise Swanson. Death on Windmill Way is a thrilling story with mouth-watering food descriptions, picturesque beaches and murder in the lavish upscale East End village of Long Island, New York.

Antonia’s looking for some peace and quiet… too bad she moved to the Hamptons! 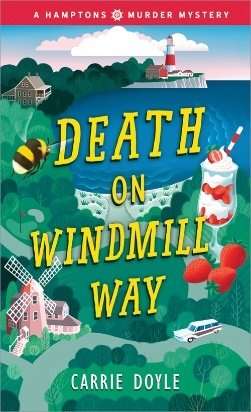 The Hamptons are known for beautiful beaches, luxurious living, millionaire mansions, and now…murder! Antonia Bingham, a renowned chef and the new owner of East Hampton’s Windmill Inn, escaped to the Hamptons to get away from a harrowing past. Yet she finds herself in more danger than ever when she learns about a curse that haunts the inn—all previous owners have died suspiciously.

I enjoyed the story and mystery in Death on Windmill Way. Buying an inn in East Hampton, renovating and reinventing it? I’m there. Finding out the former owners have died under suspicious circumstances? Nope. I think I’ll let someone else buy it! Well, Antonia had no idea about the former owners when she bought the inn though she did know that the former owner died of a heart attack. Or so they said. When she finds out that he may have been murdered, Antonia has to find out the truth for her own peace of mind.

While the book has a lot going for it story wise, there are some things that weren’t for me. Antonia judges people based on their outward appearance. Antonia describes exactly what each person looks like, and what they’re wearing. She lets us know if someone is overweight, too thin, looks like a bird, has acne, looks old, youngish, oldish, dowdy, well-dressed, etc. Then, the next time we meet the character, Antonia lets us know what they’re wearing then. Those things are not important to me as a reader, and all of the negative commentary on the characters’ looks left me with a bad feeling towards Antonia. Antonia also thinks she’s too fat herself. It’s okay for an author to tell us a little bit about what a person might look like or how old they are, but in Antonia’s case, it felt like she was a mean girl.

I love the setting of this cozy mystery, and the descriptions about it, though a little overly descriptive at times, make East Hampton feel like a place I’d love to be. My favorite character would probably be the least well-liked of the bunch if the book were real life. He thinks very highly of himself, but he reminds me of a typical newspaper man from maybe the 40s or 50s…gotta get the story! My second favorite is an older gentleman who is very kind and father-like.

Honestly though, I think that someone who feels that they’re always judged by their appearance would be hurt by the way Antonia judges her fellow characters. If that could just be x’d out of the book, I’d feel a lot better about it myself. Maybe in the following books, Antonia will refrain from caring so much about how a person looks on the outside. Now, if that doesn’t bother you, then I suggest you give this a read. I’d love to hear what you think!

I’m giving Death on Windmill Way 3.5 stars since I did enjoy the story. 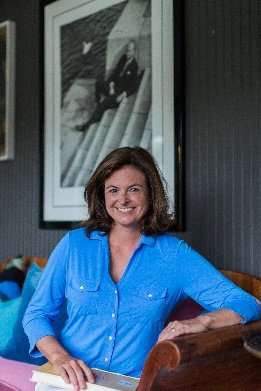 A fan of mystery and crime novels, a cooking enthusiast, a former employee of Ina Garten’s Barefoot Contessa store, and a generally nosy person, Carrie Doyle combined all of her interests to create Antonia Bingham, the foodie innkeeper and reluctant detective who stars in the Hamptons Murder Mystery series.

Carrie is the author of several novels and five optioned screenplays (one of which was produced and screened at the Sundance festival.) She was the founding Editor-in-Chief of the Russian edition of Marie Claire Magazine, and has written for several magazines. She is currently a Contributing Editor at Hamptons Magazine.

Keep up with Carrie