You are here: Home / Books / The Memory of Babel by Christelle Dabos Book Review
Thanks for sharing!

Have you ever read a book that just sucks you in and you’re disoriented when you stop reading? I discovered The Mirror Visitor quartet by Christelle Dabos by accident on Pinterest. Curious, I checked it out. The first one, A Winter’s Promise, wasn’t incredibly interesting, but just enough that I gave the second book a try. The second book, The Missing Of Clairdelune, gave me a book hangover I didn’t recover from for at least a month. I have been dying for The Memory of Babel for a year. It was totally worth the wait.

The Memory of Babel by Christelle Dabos Book Review 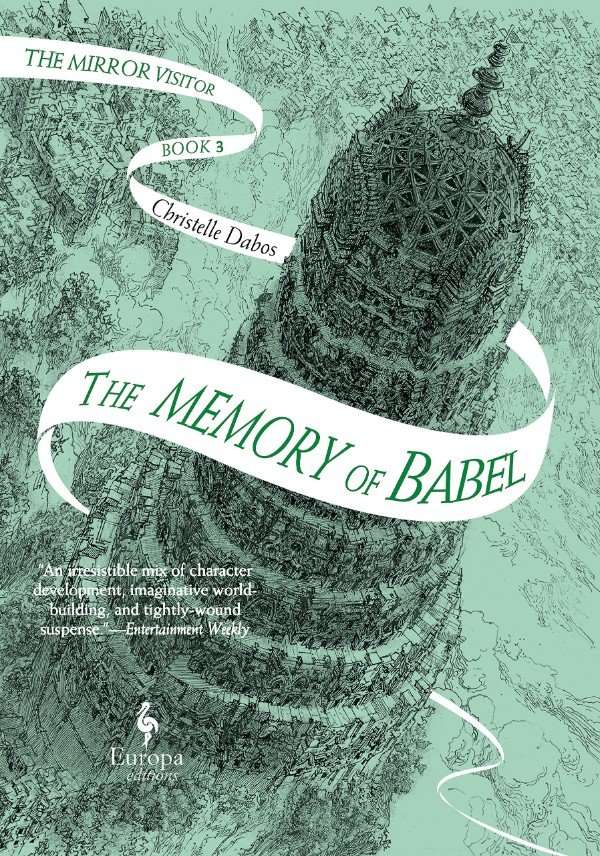 I received an ARC of this book free from NetGalley to review; however, all opinions are my own. This post contains affiliate links. If you make a purchase, I may receive compensation at no cost to you.

The Mirror Visitor quartet is actually a French series. (I never want to speak a different language more than when I’ve fallen in love with a foreign book!) The world of the Mirror Visitor quartet is composed of “arks” – land masses that formed when the “Rupture” happened and broke the original world into pieces. Each ark is governed by a family spirit, who passed along different powers to their descendants. The books follow Ophelia, an Animist from Anima who is curiously betrothed to Thorn, a man from the Pole who is as cold and distant as his ark. Poor, naive Ophelia is torn from all that she knows and loves, and is thrown into a chaotic world that may very well kill her. The worst part? The person she feels she can trust the most is Thorn, but she isn’t even sure how much she can trust him.

A Winter’s Promise introduces readers to the world and characters, but it just barely touches on the overarching story arc. I found it interesting enough to read the second book, and by the end of The Missing of Clairdelune, I was completely hooked. There’s mystery and court intrigue, a story about finding oneself, and heart-wrenching romance. I don’t want to spoil anything, but the end of book two completely broke me. Thank goodness I received an arc for The Memory of Babel!

The Memory of Babel

Stop reading now if you want to avoid spoilers for books one and two! (I won’t spoil anything major for The Memory of Babel, though there will be a few minor ones. You’ve been warned!)

In this gripping third volume of the Christelle Dabos’s best-selling saga, Ophelia, the mirror-traveling heroine, finds herself in the magical city of Babel guarding a secret that may provide a key both to the past and the future.

After two years and seven months biding her time on Anima, her home ark, it is finally time to act, to put what she has discovered in the Book of Faruk to use. Under an assumed identity she travels to Babel, a cosmopolitan and thoroughly modern ark that is the jewel of the universe. Will her talent as a reader suffice to avoid being lured into a deadly trap by her ever more fearful adversaries? Will she ever see Thorn, her betrothed, again?

It’s been three years since Thorn disappeared and Ophelia was forced back to Anima. She hasn’t been taking it well, as one can imagine. I barely survived one year not knowing what was going to happen – I can’t imagine being in Ophelia’s shoes! I read 25% of the book on the first day, dying for the moment when Ophelia is finally reunited with Thorn and able to return those three words to him: “I love you.”

Unfortunately, the moment I was dying for doesn’t happen until 50% through the book. I read the remaining 75% of the book on day two. It was the first book I’ve stayed up so late to finish reading in so long! My jaw and neck hurt by the end because I kept clenching them in anticipation.

Book 2 was all about Thorn falling in love with Ophelia. The roles are reversed in The Memory of Babel. Ophelia has to navigate her possibly-unrequited feelings for Thorn in addition to surviving her new life on Babel (difficult) and figuring out how to stop God (even more difficult).

Ophelia’s and Thorn’s relationship convinced me to read the books in the first place. I love a good hate-to-love trope. I especially love this relationship because the two are so natural together. Their chemistry is amazing. Although it is frustrating to kind of see their relationship backslide in book 3 (I mean, Thorn professes his love for her at the end of book 2!) it is also done really well because Ophelia is forced to face her feelings and grow comfortable admitting them.

Speaking of Ophelia confronting her feelings, she grows so much as a character in The Memory of Babel. We’ve seen her constantly grow since her introduction in A Winter’s Promise. Ophelia has grown up before our eyes, from a timid young girl, to someone learning to step out on her own, to finally someone who can stand on her own but who knows when to rely on someone for help.

And let’s talk about Thorn! Thorn will always be the super-awkward, uncomfortable-with-humans guy that we know and love, but he has learned that he can’t live life completely isolated. I’m not going to lie, he can sometimes come off as a jerk in The Memory of Babel (I mean, he comes off as a jerk in the other books, too, but for different reasons), but when you get down to his core character, he’s not a jerk. He finally opened up to someone, only to have his feelings apparently unrequited for three years. He won’t push Ophelia (smart, since she slapped him the first and last time he kissed her).

Even though I am completely committed to the books because of Ophelia and Thorn, The Memory of Babel‘s plot really pulled me in. The story builds on what we learned from book 2. God and the Other continue to be problematic, and Ophelia and Thorn must avoid God’s spies. Ophelia and Thorn are searching for the truth so they can take them both down. But in order to find that truth, they must search through hundreds and thousands of records kept in Babel. Ophelia must compete in order to access the most promising of these records, and no one is willing to make it easy for her. People are mysteriously dying. There’s a revolutionary continuously stirring up trouble in Babel. Ophelia doesn’t know who she can trust in this strange world. These are all things we’ve seen in the first 2 books. However, Dabos still manages to make it fresh and exciting.

Unfortunately, you can’t keep everything from God. God catches wind that Ophelia has left in search of Thorn, and he returns to Berenilde’s home. But in addition to finding Ophelia and Thorn, God is also still on his quest to locate LandmArk. Archibald, Gail, and Fox have taken it upon themselves to locate the mysterious ark for themselves. Readers get to see this subplot play out from Victoria’s point of view. Victoria’s chapters weren’t my favorite part of the story, but I still found them interesting. I especially liked them because I got to see what was happening with Archibald and the others even though they weren’t on Babel with Ophelia and Thorn.

I was very wrong.

Netgalley initially provided a two chapter excerpt for The Memory of Babel. I hadn’t known this when I first went to read the copy. I began reading with the full expectation of finishing. Surprise! I had to stop after only two chapters, but it was enough to pull me in. It was so jarring when I had to stop! I couldn’t enjoy any other books! Everything else just fell flat for me. I finally received the full book and I read it in two days and had no problems with either the format or the writing style.

Order Your Copy of The Memory of Babel

The Memory of Babel releases in the US on September 8, 2020. You definitely do not want to miss this book. This one is by far my favorite of all three books! You can pre-order (or order, if it’s already out by the time you’ve read this) from Amazon by clicking here. Click here to pre-order it from Barnes and Noble.

Now, who wants to place bets that I’ll learn French just so I can read book 4 sooner?