You are here: Home / Books / The Evening’s Amethyst: A Nora Tierney English Mystery by M. K. Graff | Guest Post
Thanks for sharing!

Welcome to my stop on the Great Escapes Virtual Book Tour for The Evening’s Amethyst: A Nora Tierney English Mystery by M. K. Graff. Stop by each blog on the tour for interviews, guest posts, spotlights, reviews and more! 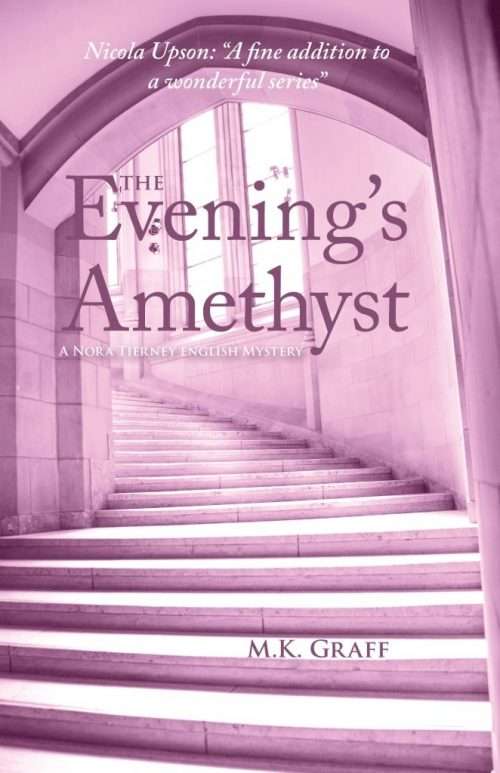 Who is Verity? That becomes a central question for American Nora Tierney, who has moved to her new Oxford home with her fiance, DI Declan Barnes, and her young son. Declan’s new case at Exeter College coincides with a frantic call from Nora’s stepsister, Claire Scott: a fellow graduate student has died in a fall, and Claire begs Nora to help her prove her friend didn’t commit suicide. The sisters conduct their own snooping, while Declan and his team juggle this death with a cold case that proves to be more surprising than Declan could ever imagine.

I write two mystery series, and vary the way the story is told in each new one, as I try my hardest not to replicate what I like to call the “Jessica Fletcher School of Murder” by having readers wonder how many murders can justifiably happen in one small town.

When I started to plot the new Nora Tierney English Mystery, The Evening’s Amethyst, I knew the main plot would revolve around an Oxford master’s student who falls to her death from a stairwell at Exeter college. Nora’s stepsister is taking her master’s there, and as a friend of the dead woman, assures Nora and her detective fiancé, Declan Barnes, that this could not be a case of suicide.

This is the fifth book in the series, with each mystery completed so they can be read in any order. I wanted a second storyline to capture attention, one I would sprinkle throughout the main parts of the book, until I brought that secondary plot line to a close after readers thought the book was over. A cold case seemed like the perfect choice. But would a cold case fit into this story I’d already decided on? How far back could I go and still have a story relevant to the main storyline?

I’d never done a cold case in the previous novels, but decided it would challenge me as a writer. I also hoped it would keep the reader from feeling that while some of my characters might appear from previous books, the story I’m telling is one they haven’t read before. Casting my mind about for a suitable thread, discarding several ideas, I felt I’d hit on the right one when

I decided to focus on the unsolved kidnapping of a 14-month-old boy from outside a Cumbrian pub. Left alone in his dirty playpen, young Donnie is taken while his drug-addled mother hangs out inside with her current boyfriend. The trail has more than gone cold; his body was never discovered. Over twenty years later, no one knows what happened to little Donnie.

Scenes from 1992 would be woven into my contemporary storyline, telling the story behind the kidnapping, and clearly letting the reader in on the kidnapper’s identity, giving them inside knowledge my characters wouldn’t have.

Delving into the cold case turned out to be one of the most satisfying parts of writing this book. I had to research the way things were in 1992, both in terms of technology, and what was happening in the world at that time. Then I had to create a reasonable motive for the kidnapper to feel justified in taking Donnie. And finally, I had to create a whole second cast of characters who would appear in the 1992 scenes and move the story of what happened to Donnie after he was kidnapped forward.

The toughest part was to figure out how to wrap that cold case into the current time period of the main novel. I found a way when Declan Barnes is told by his Superintendent that, despite being in the throes of a probable murder case at Exeter, he needs Declan’s’ team to look into a second case that’s fallen into his lap. A young man has walked into St. Aldate’s Police Station that morning—and claims he’s little Donnie.

Marni Graff is the award-winning author of The Nora Tierney English Mysteries and The Trudy Genova Manhattan Mysteries. The Evening’s Amethyst will be out in Fall of 2021. 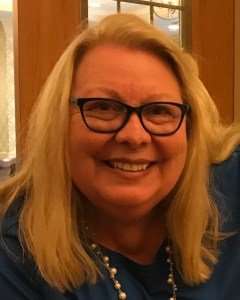 Marni Graff is the award-winning author of The Nora Tierney English Mysteries and The Trudy Genova Manhattan Mysteries. The Evening’s Amethyst is the fifth in the Nora Tierney series. Her short story “Quiche Alain” is in the Agatha-winning Malice Domestic Anthology, Murder Most Edible.

Escape With Dollycas Into A Good Book – AUTHOR INTERVIEW