You are here: Home / Books / A Hint of Mischief (A Fairy Garden Mystery) by Daryl Wood Gerber | Review and Giveaway 6/29
Thanks for sharing!

Welcome to my stop on the Great Escapes Virtual Book Tour for A Hint of Mischief (A Fairy Garden Mystery) by Daryl Wood Gerber. Stop by each blog on the tour for interviews, guest posts, spotlights, reviews and more!

A Hint of Mischief (A Fairy Garden Mystery) 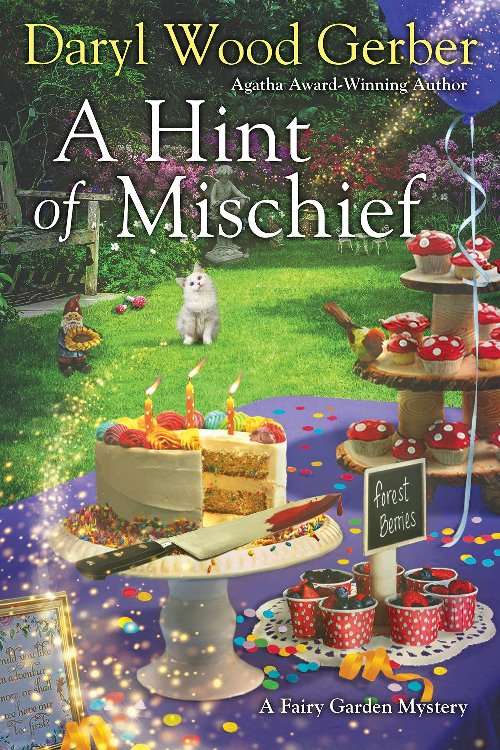 A Hint of Mischief (A Fairy Garden Mystery)

The proprietor of a fairy garden and tea shop in Carmel-by-the-Sea, Courtney Kelly has an occasional side gig as a sleuth—with a sprinkling of magical assistance. . . .

Courtney has thrown a few fairy garden parties—for kids. But if a local socialite is willing to dip into her trust fund for an old sorority sister’s fortieth birthday bash, Courtney will be there with bells on. To make the job even more appealing, a famous actress, Farrah Lawson, is flying in for the occasion, and there’s nothing like a celebrity cameo to raise a business’s profile.

Now Courtney has less than two weeks to paint a mural, hang up tinkling windchimes, plan party games, and conjure up all the details. While she works her magic, the hostess and her girlfriends head off for an indulgent spa day—which leads to a fateful facial for Farrah, followed by her mysterious death. Could the kindhearted eyebrow waxer who Farrah berated in public really be the killer, as the police suspect? Courtney thinks otherwise, and with the help of her imaginative sleuth fairy, sets out to dig up the truth behind this puzzling murder . . .

A Hint of Mischief is the third book in the whimsical Fairy Garden Mystery series by Daryl Wood Gerber. You can definitely read this book as a stand-alone, but I highly recommend the first two books in this series too. This third book is just as charming as its predecessors.

Do you believe in fairies? Courtney Kelly does as do many of her friends. She comes by it naturally since her late mother was a believer. Her dad? Not so much. But he’s come to terms with his daughter’s choice to leave his landscaping business to start her now popular fairy garden and tea shop, Open Your Imagination. However, he’s not thrilled when she becomes entangled in yet another murder case. Of course, he’s come to accept her inquisitive nature and once again cautions her to be careful.

The murder victim just happens to be a famous actress. She’s in town at the invitation of her sorority sister, Misty, for another sorority sister’s birthday party. Courtney becomes involved because Misty insists upon a fairy themed birthday party for Odine. Who cares if they’re adults? Fairy parties should be for all ages. The party planning was one of my favorite things about the book. The way the author describes all of the little details about the decor, food, games…makes me want my own fairy party! These books also make me want to make fairy gardens and fairy doors!

Speaking of fairy doors… They’ve been mysteriously popping up all over Carmel-by-the-Sea, the charming setting of the series. Though the series is fictional, the town is not, and it seems just as magical as the series makes it out to be. Jump on Pinterest and check out the photos of the area and its shops. I’m very envious of the fictional Courtney and her friends! I’d absolutely love living there. And, I wouldn’t be surprised if fairy doors popped up in real life! It was fun hunting for these little doors along with Courtney and her friends as was discovering the culprit responsible.

I’m really enjoying getting to know the main characters who populate the Fairy Garden Mystery series. I also appreciate the side characters who are regulars and the “guest” characters who are only in one book. They’re well developed and have their own unique personalities. My favorite characters are three sisters whose names all begin with H. One of the H’s is Courtney’s landlord, and I hope they continue to have parts in subsequent books!

If you enjoy magical cozy mystery books, I think you will enjoy A Hint of Mischief as well as the prior Fairy Garden Mystery books. 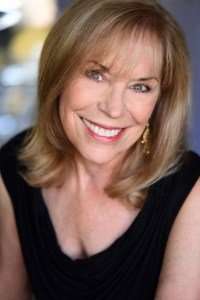 Agatha Award-winning author Daryl Wood Gerber is best known for her nationally bestselling Fairy Garden Mysteries, Cookbook Nook Mysteries, and French Bistro Mysteries. As Avery Aames, she penned the popular Cheese Shop Mysteries. In addition, Daryl writes the Aspen Adams Novels of Suspense as well as stand-alone suspense. Daryl loves to cook, fairy garden, and read. She has a frisky Goldendoodle who keeps her in line. And she has been known to jump out of a perfectly good airplane and hitch-hike around Ireland alone. You can learn more on her website: httsp://darylwoodgerber.com

A Hint of Mischief TOUR PARTICIPANTS

June 23 – This Is My Truth Now – REVIEW, CHARACTER INTERVIEW

June 24 – Cozy Up With Kathy – REVIEW, GUEST POST WITH RECIPE

June 25 – Escape With Dollycas Into A Good Book – SPOTLIGHT

June 27 – I Read What You Write – AUTHOR INTERVIEW

Thanks for sharing!
« Five Belles Too Many (A Sarah Blair Mystery) by Debra H. Goldstein | Author Interview and Giveaway
Death at Fair Havens by Maria Mankin & Maren C. Tirabassi | Guest Post and Giveaway 7/1 »