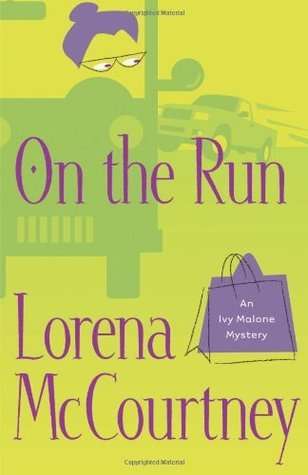 This post contains affiliate links. I will receive a small compensation if you make a purchase. Thanks!

Super senior sleuth Ivy Malone is spunkier than Miss Marple, with a curiosity that just won’t quit. That inquisitiveness has gotten her into plenty of trouble, including murder, mayhem, and a place on a mini-Mafia hit list. Now Ivy’s headed across the country with a stray cat and God as her only companions. But just when she thinks she’s safe, two dead bodies turn up-discovered by Ivy, of course. A flock of emus, a survivalist outpost, and paintball are just a few of the strange things Ivy has to deal with in order to solve this latest crime. But will anyone believe the truth? On the Run, the third book in the Ivy Malone mysteries, is a mix of great fun and great suspense. Readers will love Ivy’s latest lively adventure.

On the Run is the third book in the Ivy Malone mystery series. I think it is my favorite so far. Ivy is such a fun LOL (little old lady).

This time around Ivy is traveling in an RV still running from those Braxtons! She’s got Koop the cat with her to keep her company. She also picks up Abilene, a woman on the run from her husband. They both end up as caretakers at an Emu ranch where a homicide/suicide makes Ivy suspicious that things are not as they seem. Of course, good old Ivy solves the crime once again and leaves us wanting another book! Thankfully there is a fourth, but final, book in the series that I will be reading next.

I really love the addition of Abilene in this book. I’m glad Ivy has someone to keep her company. Mac makes a short appearance in this book as well. The emus were entertaining and some funny paintball scenes were included.

This is definitely the series for you if you love clean, cozy, Christian mysteries.