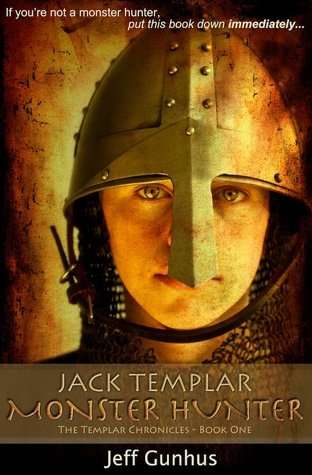 If you’re not a monster hunter, don’t read this book!

Seriously, this book is not meant for you. By reading it, you run the risk of attracting monsters to your position and being attacked. So, unless you are willing to join the fight…just walk away.

Still here? OK, don’t say I didn’t warn you. Let me introduce myself. I’m Jack Templar and I’m an orphan.

Recently, I discovered that I came from a long line of monster hunters. You know, vampires, werewolves, zombies, you name it. Turns out there was some kind of truce between monsters and the hunters that kids under fourteen were off-limits. I didn’t find out about all this until the day before my birthday. Yeah, you guessed it, my fourteenth birthday. So, all bets were off. The monsters were coming to get me.

Not only that, but I also found out that if monsters around the world could choose one human to kill, it would be me. Why? I haven’t a clue, but the hunters I’ve met talk about a prophecy and that they think I’m the One…whatever that means. I’d like to find out some day, but for right now, I’m just trying to stay alive.

If you want to hear a story that will scare you, gross you out and forever change the way you look at the world around you, then you came to the right place.

But, if you want to keep the illusion that the world is a safe and orderly place, then get out of here and stop wasting my time.

Do your duty, come what may.

Take a little bit of Percy Jackson, a little bit of Harry Potter, and a little bit of Greg Heffley (Diary of a Wimpy Kid kid for those of you who haven’t had the privilege of meeting Greg)….mix the best parts of them together and who do you get? Jack Templar!

And fair warning, do NOT read this book unless you want monsters coming after you too. Maybe you shouldn’t read this review after all. Think really hard about it. Can you handle monsters? Yes? Ok, cool.

Jack is a 13 year old on the verge of his 14th birthday when we meet him. He lives with his aunt since his parents died when he was too young to remember them.

Little does Jack know, but monsters are living in his town waiting for the day he turns 14. Why? Well, a little hint here…check out the title! Jack is a monster hunter; however, he has absolutely no clue that he is one.

As you can well imagine, having monsters come after you all of the sudden can be quite disturbing to a teenage boy. As can suddenly becoming more buff than you were the night before, though that’s a good disturbing.  And seeing your principal….well, I don’t like to give spoilers, so you’ll have to trust me on this one. It’s not good.

This book is full of endearing characters and exciting plot twists and turns. It is a very quick read for an adult and an exciting adventure for a middle-grader. I’d recommend it to anyone 10 to 110! I’m looking forward to reading about Jack’s continuing adventures.

Jeff Gunhus is the USA TODAY bestselling author of thriller and horror novels for adults and the middle grade/YA series, The Templar Chronicles. The first book, Jack Templar Monster Hunter, was written in an effort to get his reluctant reader eleven-year-old son excited about reading. It worked and a new series was born.
His books for adults have reached the Top 30 on Amazon, have been recognized as Foreword Reviews Book of the Year Finalists and reached the USA TODAY bestseller list.

After his experience with his son, he is passionate about helping parents reach young reluctant readers and is active in child literacy issues.


Thanks for sharing!
« Book Review: A Cast of Stones by Patrick W. Carr
Book Review The Gingerbread House by Nell Carson »