You are here: Home / Books / Book Reviews / Book Reivew: Frizzy The S.A.D. Elf
Thanks for sharing!

In FRIZZY THE S.A.D. ELF, Frizzy, one of Santa’s Elves, styles the hair of Christmas dollies, but misses them when Santa takes them on Christmas Eve. 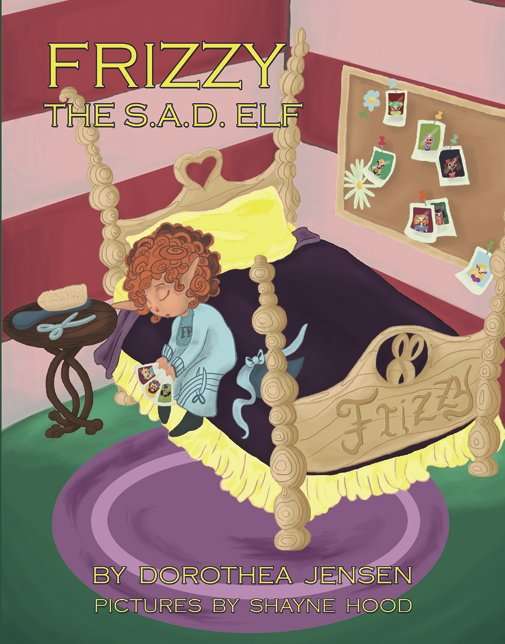 
Santa’s Izzy Elves stories are not your usual picture books – older kids who enjoy playing with words and rhythmical verse will love them, too.

One reason for this is that although their stories are told in verse echoing the famous 19th century poem: A VISIT FROM SAINT NICHOLAS, Santa’s Izzy Elves are definitely 21st century, with electronics galore!

FRIZZY THE S.A.D. ELF is the fourth of these poetic tales. In this story, Frizzy, one of Santa’s Izzy Elves, styles the hair of Christmas dollies, but misses them dreadfully when Santa takes them away on Christmas Eve. (She suffers from S.A.D.: Seasonal Affection Distress.) Frizzy decides she needs to change her job so she doesn’t get so attached to the toys she works on. She starts making something completely different but soon finds that her plan isn’t going to work out exactly as she intended!

I received a copy of this free for an honest review which I’ve given.

Frizzy the S.A.D. Elf is a very cute book to add to your list of annual Christmas book reads. Poor Frizzy loves all of the dollies she beautifies every year and gets so sad when she has to let them go! Thankfully, her best friend comes up with an idea that helps her get out of her SAD blues.

Your kids will love this clever rhyming story with the simple illustrations. Christmas is my favorite time of year. Though it makes me a bit sad that even letters and wish lists to Santa have become an online thing! This story takes that into account, and the kids can instantly let Santa know if they like the new toys he’s coming up with or not.

I think kids should stick to paper letters to Santa (and be happy with what they get!). Read this cute book to your kids during the holiday season. Kids love Christmas and Christmas books!

Santa’s Izzy Elves have won a number of literary awards.  Dizzy, the Stowaway Elf received Honorable Mention in the 2014 Purple Dragonfly Book Awards and has been Story Book Approved.  Plus, the e-book editions of Tizzy, the Christmas Shelf Elf and Blizzy, the Worrywart Elf  both received the prestigious Mom’s Choice Award, honoring “the best in family-friendly media”.

Thanks for sharing!
« Mojave Green Review and Book Giveaway US only
Twelve Foods You Should Be Eating for Healthy Hair »