You are here: Home / Entertainment / Getting Ready for SOLO: A Star Wars Story: New Clip and Featurettes #HanSolo
Thanks for sharing!

Hey everybody! We are officially less than 3 weeks away from SOLO: A STAR WARS STORY! I don’t know about you guys, but I am so excited to see this new addition to the Star Wars saga. My excitement just keeps growing with each new sneak peek. A new clip and 2 featurettes for SOLO were recently released. Check them out below!

Can you hear me screaming? It’s the first time Han and Chewie team up as pilot and co-pilot! And they may not realize it just yet, but they are going to be sitting side-by-side in that same ship for years to come. 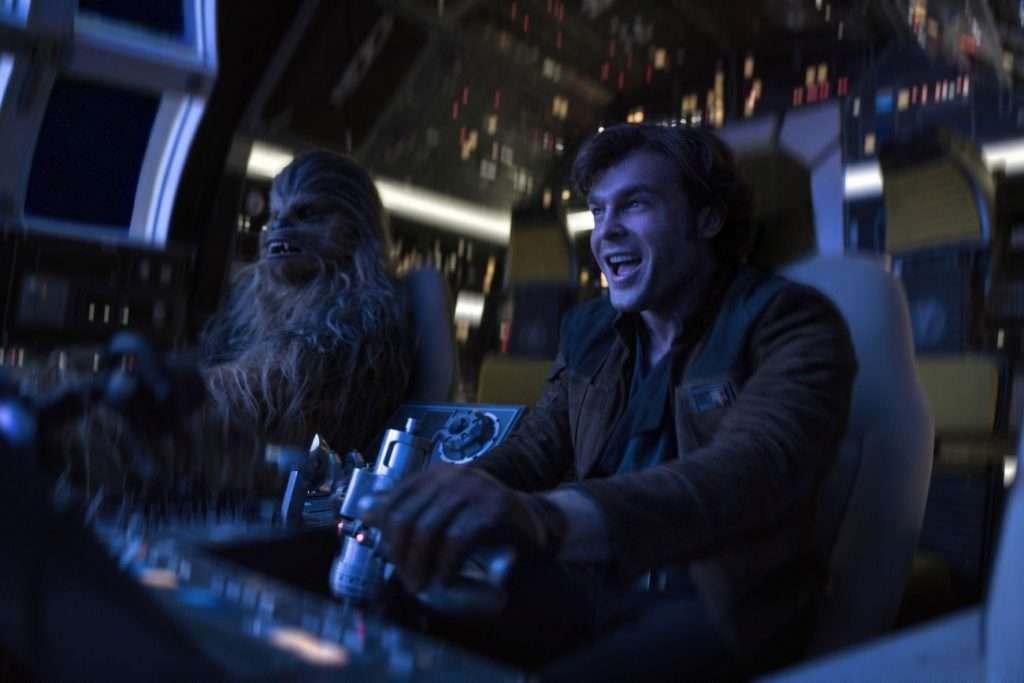 Alden Ehrenreich is Han Solo and Joonas Suotamo is Chewbacca in SOLO: A STAR WARS STORY.

What I would like to know is why Qi’Ra is sitting in the co-pilot seat in the first place, especially since she doesn’t seem to know what she’s doing. Can you just imagine what Chewie is thinking? It was nice of him to simply help her out. Also, what is Qi’Ra going to help Lando with? Why is the Falcon’s pilot not piloting her?

Speaking of Lando and the Falcon, check out the featurette below to tour the Millennium Falcon with Lando Calrissian himself, Donald Glover!

Tour the Millennium Falcon with Donald Glover in this SOLO: A Star Wars Story Featurette

As Donald Glover says, the Falcon has never looked better! Wow! I can barely recognize the beloved piece of garbage in this clip. Guest quarters? A food bar? A cape room? What do you guys think Han did to those features of the ship? I bet you he definitely didn’t keep the cape room (sadly).

Speaking on Han, check out the featurette below, all about becoming Han Solo.

It takes a lot to bring to life a past version of a character already well established and well loved. I remember hearing about all kinds of complaints and protests about hiring a new actor to play a younger version of Han Solo. I’ll admit, I was worried at first, but all of these sneak peeks have made me confident that everyone who came together to make this movie possible has succeeded in bringing a younger version of Han to life.

Of course, there’s a lot more to this movie than simply bringing a younger Han Solo to life. As we learn about in the featurette, this is a different version of Star Wars than we’re used to. This is the Star Wars before the original trilogy picks up, when the Empire controls everything and before Leia leads the rebel alliance against them. I can’t wait to see how everyone comes together to tell this story.

See SOLO: A Star Wars Story in Theaters May 25th

SOLO: A STAR WARS STORY comes to theaters May 25th and you can get your tickets now through Fandango. If you need more motivation to see this movie, check out my 5 Reasons Why I’m Going to See Solo post (there’s also free printables!). And if you somehow happened to miss the official trailer for this movie, you can watch it and check out my breakdown of the trailer by clicking here.

May the Force be with you!

Thanks for sharing!
« Things You’re Doing Right Now That Could Be Shortening Your Lifespan
Dating the Prince | A Funny, Romantic Retelling of The Prince and The Pauper »