You are here: Home / Books / Miracles are Golden by Catherine Lanigan
Thanks for sharing! 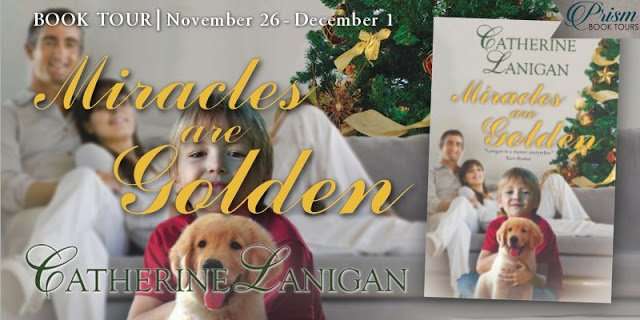 The blog tour for Miracles are Golden has come to an end. If you missed any of the stops, you can get links to each stop as well as a snippet from them below. Make sure you enter the giveaway too!

Miracles are Golden is a different kind of Christmas story in just about every manner of literary preconceptions a reader could have. To follow with that unique place it holds not only in my heart, but on the roster of books I have written, this PRISM BOOK TOUR is different as well…

Jimmy Longwood pressed his face against the pet store window, not minding the cold. On the other side of the glass was an eight-week-old Golden Retriever puppy that Jimmy had named “Bubblehead” because the puppy’s head was unusually large. Bubblehead was just as eager to see Jimmy and jumped over his five brothers and sisters to stand nose to nose with Jimmy.

“Did you miss me, boy? I missed you. Now that school is out for the holidays, I can visit you every day for as long as I want.”

Jimmy glanced at the clock once more as he followed his father into the kitchen where he sat on a wrought iron Tuscan influenced bar stool. He leaned on the granite counter top watching his father hiding presents in the pantry.

“Did you talk to your mother?” John asked.

“We began a discussion about Bubblehead and again I reminded her that Grandpa and Grandma gave me a hundred dollars for my birthday this year which puts me over the top for enough money to buy Bubblehead. Which we can do, Dad, if you’ll just get your coat and hat…”

“Jimmy,” John sucked in a long breath to cool his frustration.

Among the Reads – Excerpt

A good night’s sleep did not help Jimmy’s disposition or settle his fears by morning. His mind was overwhelmed with emergency last minute plans to rescue Bubblehead. Unfortunately, all of his plans were bizarre visualizations worthy only as segments of the Extreme Sports Network.

Because he was a long way from sixteen and did not know how to drive a car, legally or illegally for that matter, even if he did break the pet store window with a rock, steal Bubblehead and make his escape, he could not drive a getaway car.

He conjured up a scenario involving a SWAT team and a helicopter rescue. He thought of calling the Mayor on the phone and involving him in his “Save Bubblehead” campaign.

All my plans are doomed!

Jimmy picked up the remote and turned on the television. As luck would have it, the first thing he saw after the in-house cable program promoting the hotel’s features and restaurants, was a Christmas ad in which three Golden Retriever puppies knocked over a plant and the owner had to use a special vacuum to clean the mess. Jimmy threw the remote high in the air and caught it on its way back down. “It’s a sign!”

He raced to the adjoining door and closed off his parents’ laughter.

“Yes!” he said to himself, watching the adorable puppies with tags around their necks. “There isa Santa Claus. I just have to believe. Maybe I will get a miracle.”

Though they moved quickly, the wind gusted at ever increasing speeds thrusting the cloud of blinding snow down the slope. It threatened to overtake them.

John knew that if they didn’t beat the squall, they would have to find shelter until the snowstorm passed. There was no telling how long that could be. If they were to remain this high on the mountain overnight, they could freeze. Realizing their predicament was more dire than he’d originally thought. John slowed and motioned for them to take another route to the left. “We need to go around the squall,” he yelled to them.

But the wind suddenly seemed more than wind. It didn’t howl anymore, it thundered.

John slowed down for Jimmy and Melanie to catch up to him.

It was then Jimmy saw the panic on his father’s face. “What is it?”

Even though he didn’t have a body, Jimmy felt tears. He felt incredibly sad. “I could have done more to be a better kid. I wish I’d been more…loving.”

Sadness engulfed Jimmy’s soul. “But I did love them… I just…”

“So you see, Jimmy, we must send you back to earth. You must learn to give love with all your heart. It’s the only reason souls go to earth.”

“This is a sweet story including one of the things I love a lot and that is dogs. . . . I highly recommend this book to other readers.”

There was a rustle of footsteps on the second floor. Jimmy heard voices.

“Do you think Santa has been here yet?” A woman’s voice said.

Jimmy looked up at the landing on the staircase and saw a mother, father and a child all dressed in flannel pajamas, robes and slippers descend the stairs. Behind this trio came an elegant woman dressed in an expensive red satin robe and matching satin slippers.

“I know Santa has been here, Robin and he’s brought something very special for you.”

“Thank your Aunt Daphne. She brought him all the way from New York City for you,” Hal said.

There was nothing weak about the brightness of the little boy’s smile as he approached the fireplace, his hands outstretched to cuddle Jimmy.

“Robin, do you think Santa remembered it right?” The boy’s mother asked.

The day after Christmas Jimmy was roused early, taken out the front door to potty in the bushes and then given breakfast, all before daylight.

What’s up with these people? Don’t they sleep in? What’s the rush?

“Here you go, Beau. Yum. Doesn’t this smell good?” Robin asked placing a dish of canned dog food in front of him.

Jimmy sniffed the food and jumped back.

They don’t expect me to eat this stuff do they? How about a rasher of that bacon? Or maybe a smidgeon of that hot cinnamon bun?

“…I loved this book. I think everyone should read it and discuss it with their family, friends, church group, etc. Ms. Lanigan could re-write the phone book and I would read it. Seriously. She is that good.”

The impact of Robin’s emotions on Jimmy was like two spaceships colliding in a Star Trek episode. It rocked Jimmy’s psyche.

He needs me! Not even my parents in my other life ever acted like they needed me!

I love you, Robin. Jimmy gulped back a puppy tear.

I’m thinking fast here, kid. I’m not gonna let this thing, whatever it is, beat you…er, us. You’ve got me now. We can do it.

Suddenly, Jimmy’s mind went back to his time in heaven. The memories of some of the things he was taught there came back to him.

But he had to think. Think hard. Mr. Angel had told him that he was supposed to help people with the knowledge he’d been given. It had all come so easily to him in heaven. But now, it was as if his little puppy brain was going to burst with the effort. He thought and thought. But still he couldn’t remember what it was he was supposed to do.

He had the answers locked in his head. All he had to do was remember. 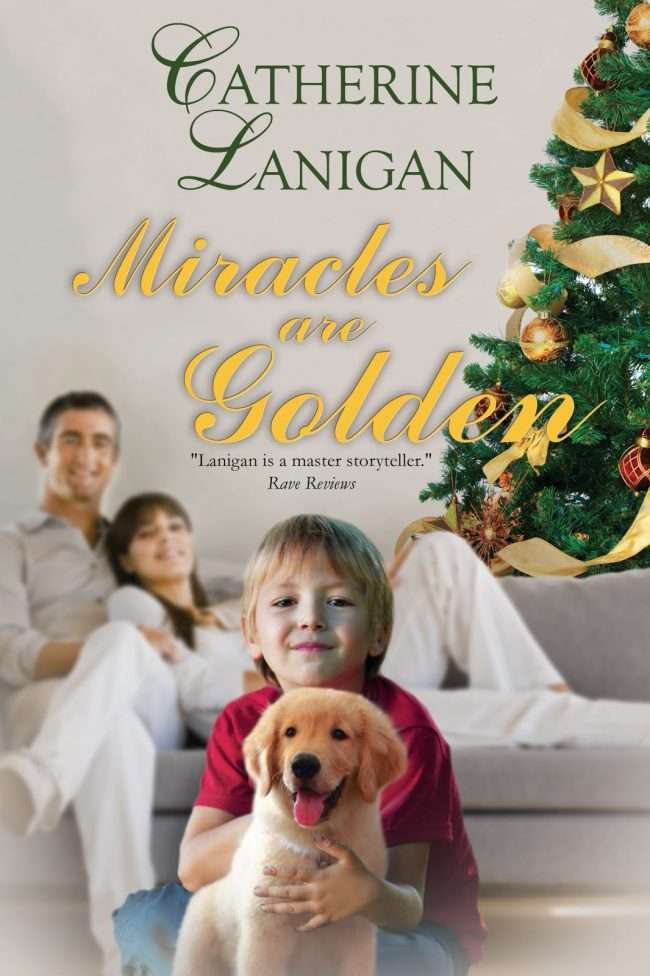 This heartwarming story is about eight-year-old Jimmy Longwood, who has fallen in love with a Golden Retriever puppy. When his parents explain that their condo does not allow pets, Jimmy is heartbroken. While skiing in Aspen the entire family is killed in an avalanche. Jimmy goes to heaven and meets an angel who decides to send Jimmy back to earth as the very Golden Retriever he’d wanted for his own and to learn the one lesson all human beings must learn…unconditional love. 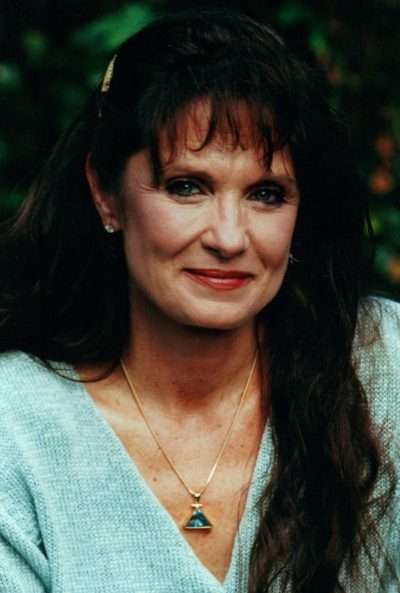 Catherine Lanigan is the international bestselling and award-winning author of over forty-five published titles in both fiction and non-fiction, including the novelizations of Romancing the Stone and The Jewel of the Nile. Ms. Lanigan’s novels have been translated into over twenty-four languages. She is an outspoken advocate for domestic violence and abuse and was honored by The National Domestic Violence Hotline in Washington, D.C.

Ms. Lanigan has been a guest on numerous radio programs including “Coast to Coast” and on television interview and talk show programs as well as blogs, podcasts and online radio interview programs. She writes a monthly blog for Heartwarmingauthors.blogspot.com.

Rescued by the Firefighter