You are here: Home / Books / Miss Saunders Takes a Journey by G. G. Vandegriff | Book Review
Thanks for sharing! 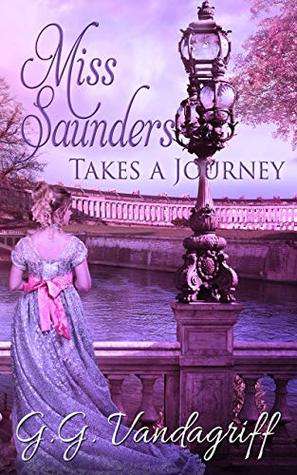 During her second London Season, the Incomparable, Miss Arabella Saunders, is running from gossiping tongues.

She flees to Bath, accompanied by eccentric chaperones Miss Braithwaite (with her tortoise, Henry Five) and Lady Clarice. Almost immediately two gentlemen enter her circle of acquaintance. Appealing to her adventurous spirit, Mr. Charles Rollins encourages her to emigrate to South Africa with him. Cautious Lord James Eubanks warns her of the perils of such a course.

The standards of the day do not favor a spirit as independent as Arabella’s. As she bridles at their restraints, events conspire to drive her into a forced marriage. She flees to the Yorkshire Dales.

She is running, but can she outrun her heart? Will she retreat or grasp the future life is offering her?

I received this book free in order to share my thoughts with you. A review was not required. This post contains affiliate links.

My review of Miss Saunders Takes a Journey

If you are in the mood for a light read and are a fan of regency romance, you need to take a look at Miss Saunders Takes a Journey. It is a fast-paced, marriage of convenience type of book. I’ve read other books that include a marriage of convenience, and I always think, “How awful would that be?” Thankfully, in books, the marriages usually work out.

In this case, Arabella is forced into marriage after she is kidnapped by a rogue, and her reputation is ruined. It doesn’t matter that her virtue was intact. A woman was ruined if she was with a man and no chaperone. She could either get married or become a spinster. Since Arabella has such a strong will, she doesn’t take to the idea of a forced marriage too well, but her brother convinces her to go through with it.

I really enjoyed the first half of the book, and I wish that it had been longer and gone into more depth. Miss Braithewaite and Lady Clarice were very amusing characters, and I’d like to have gotten to know them better. Though I liked Arabella, I couldn’t get a complete grasp of her character. It was the same with the men in Arabella’s life. I felt like all of the sudden one of the men, who was a completely charming man, became a rogue. We needed some more clues about him.

All in all, Miss Saunders Takes a Journey is a good read for when you don’t want to be stuck in a long book, and you just want to escape for awhile. This is the second book in The Saunders Family Saga. The first is titled Love Unexpected.

Just an FYI: one of the men in the book had an “arrangement” with a widow. It is definitely obvious what the arrangement is.

You can purchase the first two books in this series below or read them free on Kindle Unlimited.

Thanks for sharing!
« 5 Reasons You Should Learn to Play a Musical Instrument
Pokémon Detective Pikachu Is a Can’t Miss Movie »