You are here: Home / Books / Killing Time (A Dodie O’Dell Mystery) by Suzanne Trauth Character Interview
Thanks for sharing!

Welcome to the Great Escapes Virtual Book Tour for Killing Time (A Dodie O’Dell Mystery) by Suzanne Trauth. Stop by each blog on the tour for interviews, spotlights, reviews and more! 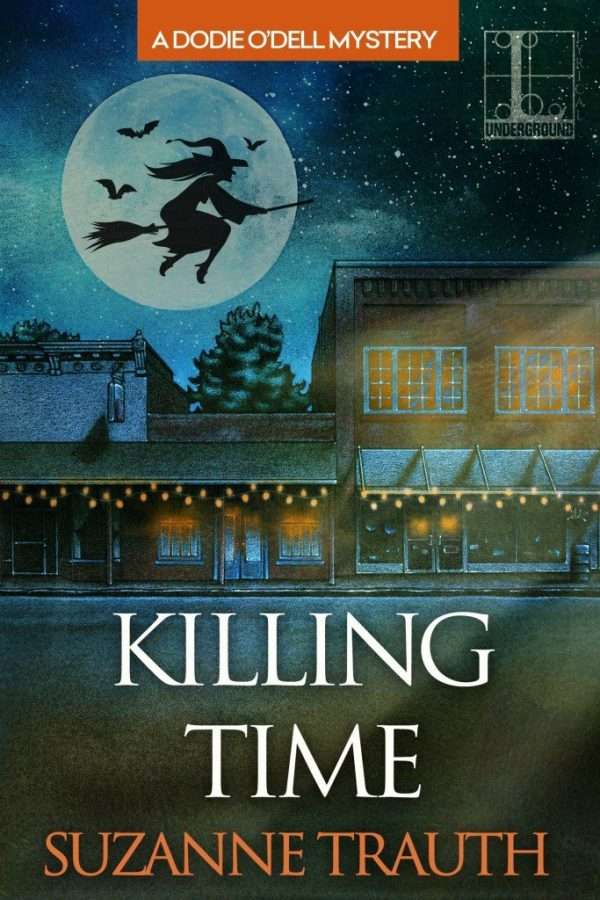 With Halloween just around the corner, Dodie O’Dell is making preparations to transform the Windjammer Restaurant on the Jersey Shore into a haunted house, while the Etonville Little Theatre is staging Dracula. But casting the titular Transylvanian is proving challenging. The amateur actors in the company are not shy about chewing the scenery, but who among them can convincingly sink their fangs into a victim’s neck?

When a mysterious newcomer with a transfixing Eastern European accent lands the part, rumors that he might be an actual vampire start to take flight—not unlike the bat who’s recently been spotted in the town park.

But everyone’s blood really runs cold when a stranger is found in the cemetery with a real stake in his heart. Dodie decides to put her Halloween theme menu on the back burner and stick her neck out to bring the killer into the light of day. She’d better keep her wits about her, though—or Dodie may be the next one to go down for the Count . . .

“It sure looks haunted,” Edna murmured to no one in particular, to the cast of Dracula in general. They were grouped around her on the sidewalk that ran past the old Hanratty place that Carlos and Bella had rented. I’d never been inside though once I’d driven by it when I first moved to Etonville on my way out of town.

The house stood on half an acre of scruffy lawn with patches of dried dirt, surrounded by a few straggly trees—minus leaves at this time of the year—and no neighbors. The nearest houses were on a side street some distance away. The three-story building looked as if it might collapse at any moment, its outer walls covered with weathered, gray shakes, the steps to the front door supported by concrete building blocks. There was no handrail.

Light leaked out of windows on the first floor. Curtains covering small, circular panes on the third story—an attic room?—quivered. Was someone up there watching us? I shivered. A turret rose upward from the right side of the structure, giving the house a smidge of outdated dignity. A drain pipe dangled loosely from the gutter.

“Let’s go.” Penny corralled actors and nudged everyone forward to the front door. There were six company members, Renfield saying he’d be along later, plus Penny, Lola, Pauli, and me. Strength in numbers.

We crept across the porch cautiously, aware of the creaking beneath us as the flooring shifted with each individual’s footsteps. Penny put out a hand to knock on the door. Before she could hit knuckles to wood, it flew open. “Welcome everyone!” Bella stood in the doorway, a silhouette backlit by muted foyer lighting.

Behind her Carlos stood silently, observing the group huddled in his entryway, like deer caught in headlights.

Lola took the lead, moving graciously into the house. “Thank you. So nice of you to invite us to your home.”

I’m not sure what the members of the Etonville Little Theatre were expecting. Given the exterior and location of the Hanratty homestead, I anticipated something out of a late-night classic horror film.

Thanks, Dodie, for taking the time for an interview with me! I know my readers will love finding out more about you!

Can you tell us a little bit about the Windjammer Restaurant and how you happened to become its manager?

Sure! A few years ago I was managing a Jersey Shore restaurant in Candle Beach. Then along came Hurricane Sandy and it wiped out both the restaurant and my home. My boss Grody Van Houten, an old surfer bum, decided to take a break from the restaurant business and suggested I head to north Jersey where his cousin, Henry, owned a place in Etonville. The Windjammer…complete with a sailing vessel décor! The restaurant was homey, family-oriented, but badly in need of organization. So for the past few years I’ve been riding herd on the staff and looking for ways to promote the Windjammer and feature Henry’s yummy specialties.

Was the restaurant always tied to the productions of the Etonville Little Theatre or was that something that started when you got involved?

Theme food to match the ELT’s production was my idea. Henry was a little skeptical at first, but once Etonville got wind of my plan, they were excited. The town has become an enthusiastic supporter…most of the time. I featured a seafood buffet for Dames At Sea, Italian night for Romeo and Juliet, and a 1940s Brooklyn food festival for Arsenic and Old Lace. I’m taking a risk with the theme food for Killing Time. Crossing my fingers that this idea goes over well…yikes!

I see that the community theatre put on Arsenic and Old Lace a while ago! That’s one of my favorite movies, so I’ll bet that was a fun production. Of the productions that you’ve been involved with, do you have a favorite and why?

Well…that’s a hard question. They’ve all been so different. Classics, musicals, even a new play (that might have been a mistake!) I’d have to say that my favorite is always the one that’s about to open because it gives me the chance to work my culinary imagination. To get creative and just a little bit crazy…

Dracula! That ought to be a great production, especially since it’s Halloween! Can you give us a hint about what’s going to be on the menu?

I’d like to tell you more about the theme food menu for Dracula, but I’ve been working hard to keep it a secret until I display the results a few days before the show opens. Maybe I can give you a little hint about the primary ingredient…it begins with “G,” has been known to throw a wrinkle into Dracula’s eating habits, and gets a bad rep for creating halitosis…

Have you ever been roped into performing in one of the productions?

Yikes! No! But I feel as though I’ve done quite a bit of acting as a sleuth solving murders in Etonville. I’ve gotten pretty good at following my investigative instincts wherever they lead me and sometimes they require that I assume other identities. Think a long lost relative, someone from out of town looking for directions, supporter of a dear, departed friend. You get the picture.

If you were going to play the lead in a production, what would be your dream role?

For Halloween this year, I’m going as Wonder Woman…I wouldn’t mind playing that role on screen or stage!

Finally, is there anything else going on in your life that we really need to know about?

If I seem a little scattered, it might be because there is a lot on my plate now…no pun intended. Besides the theme food, organizing the kids’ Halloween parade down Etonville’s main street, and serving on the entertainment committee for the town costume party, I’m supposed to be planning a wedding to my fiancé police chief Bill Thompson. Venues, dresses, invitations…yikes! My parents would freak out but we’re thinking of eloping…

Thanks for taking the time to talk with me!

Suzanne Trauth is a novelist, playwright, screenwriter, and a former theatre professor at a university. She is a member of Mystery Writers of America, Sisters in Crime, the Dramatists Guild, and League of Professional Theatre Women. When she is not writing, Suzanne coaches actors and serves as a celebrant performing wedding ceremonies. She lives in Woodland Park, New Jersey.

View from the Birdhouse – REVIEW

Thanks for sharing!
« Stay with Me by Becky Wade | Book Review #SWMPrism
Murder in the Wine Country by Janet Finsilver Guest Post »