You are here: Home / Books / Death at High Tide by Hannah Dennison | Book Review
Thanks for sharing!

Welcome to the Great Escapes Virtual Book Tour for Death at High Tide: An Island Sisters Mystery by Hannah Dennison. Stop by each blog on the tour for interviews, spotlights, reviews and more!

Death at High Tide is the delightful first installment in the Island Sisters series by Hannah Dennison, featuring two sisters who inherit an old hotel in the remote Isles of Scilly off the coast of Cornwall and find it full of intrigue, danger, and romance. 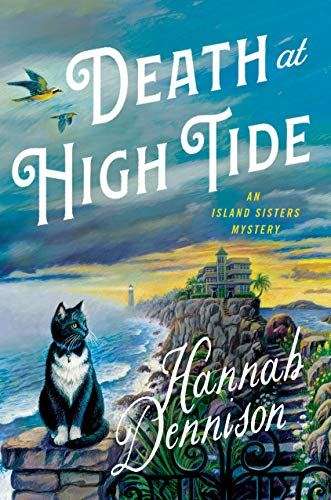 When Evie Mead’s husband, Robert, suddenly drops dead of a heart attack, a mysterious note is found among his possessions. It indicates that Evie may own the rights to an old hotel on Tregarrick Rock, one of the Isles of Scilly.

Still grieving, Evie is inclined to leave the matter to the accountant to sort out. Her sister Margot, however, flown in from her glamorous career in LA, has other plans. Envisioning a luxurious weekend getaway, she goes right ahead and buys two tickets—one way—to Tregarrick.

Once at the hotel—used in its heyday to house detective novelists, and more fixer-upper than spa resort, after all—Evie and Margot attempt to get to the bottom of things. But the foul-tempered hotel owner claims he’s never met the late Robert, even after Evie finds framed photos of them—alongside Robert’s first wife—in his office. The rest of the island inhabitants, ranging from an ex-con receptionist to a vicar who communicates with cats, aren’t any easier to read.

But when a murder occurs at the hotel, and then another soon follows, frustration turns to desperation. There’s no getting off the island at high tide. And Evie and Margot, the only current visitors to Tregarrick, are suspects one and two. It falls to them to unravel secrets spanning generations—and several of their own—if they want to make it back alive.

My review of Death at High Tide

I watch a lot of British television, so when I read the description of Death at High Tide and saw that it was set off the coast of Cornwall, I knew I had to read it. Cornwall is such a beautiful place. Though I’ve never actually been there in person, I’ve been there through shows like Doc Martin and Poldark. Through this book I got to travel to a place I’ve heard of but know nothing about…the Isles of Scilly.

Well, let’s just say that after reading Death at High Tide, I’m not sure I’d want to jump in a boat and head there…especially not in the fall. If I were already there, I might be okay. Anyway, Margot did not think things through. When she hears that her recently widowed sister may have inherited the only hotel on Tregarrick in the Isles of Scilly, she immediately makes plans for them to visit it. I’ve read some reviews for Death at High Tide, and several aren’t very kind to Margot. Yes, she comes off brash, pushy and self-centered but keep reading. I think she’s probably not always that way (I hope not!). She’s got a reason. As for the other characters, they’re not extremely likable; however, all of them are going through stuff, and some of them just aren’t nice.

When the book ended, I found that I had really enjoyed the mystery, and I understood the characters better. The whodunit is pretty obvious, but how everything plays out still makes putting the clues together and solving the mystery fun. I think you’ll feel the same. This is a series that I’m really curious about. I am excited to see how the characters behave in the next book. Give Death at High Tide a read! It earns four stars from me. 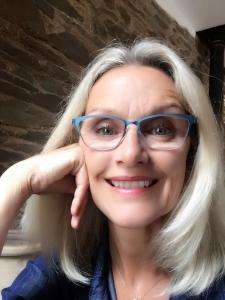 Hannah Dennison was born and raised in Hampshire but spent more than two decades living in California. She has been an obituary reporter, antique dealer, private jet flight attendant and Hollywood story analyst. For many years Hannah taught mystery writing workshops at the UCLA Extension Writers’ Program in Los Angeles, California.

Hannah writes the Honeychurch Hall Mysteries and the Vicky Hill Mysteries both set in the wilds of the Devonshire countryside where she now lives with her two high-spirited Hungarian Vizslas.

Have you signed up to be a Tour Host?
Click Here Find Details and Sign Up Today!

Thanks for sharing!
« The Other One | Binge Watch this Comedy on Acorn TV
3 Trends to Watch: What Lies Ahead for the Insurance Market in 2020? »