You are here: Home / Books / LyricPop Children’s Music Books
Thanks for sharing!

Welcome to the Meowloween Giveaway Hop! Back in June I did a giveaway with LyricPop, and they’ve got 4 brand new titles for you! One of my US readers will win these 4 books: Respect, song lyrics by Otis Redding; We Got the Beat, song lyrics by Charlotte Caffey; Move the Crowd, song lyrics by Eric Barrier and William Griffin; and These Boots Are Made for Walkin’, song lyrics by Lee Hazelwood. 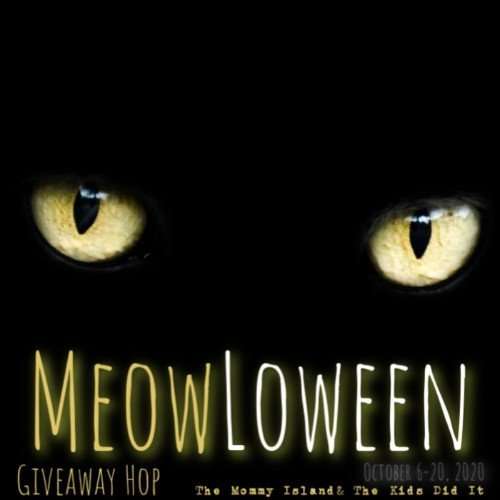 Thanks to our hosts, The Mommy Island and The Kids Did It.

I received PDF copies of these book free to review; however, all opinions are my own. This post contains affiliate links. If you make a purchase, I may receive compensation at no cost to you. 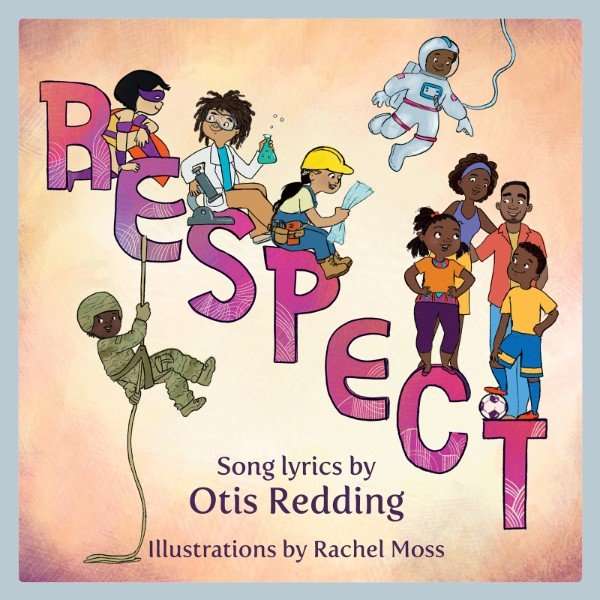 Otis Redding’s classic song “Respect”—as popularized by Aretha Franklin—becomes an empowering picture book exploring the concept of mutual respect through the eyes of a young girl.

I don’t know about you, but I can’t hear the word respect without singing Respect! I’m known to randomly break out in song; however, if I hear the name Otis Redding, I don’t break out into Respect; I break out into Sittin’ on the Dock of the Bay or These Arms of Mine. This book is the perfect way to introduce your kids to both Aretha Franklin and Otis Redding. I love how Rachel Moss took this song and illustrated it with these amazing pictures of all of the possibilities kids have to look forward to.

Respect is a children’s picture book based on lyrics written and originally recorded by Otis Redding in 1965. Aretha Franklin’s iconic rendition of the song later peaked at #1 on Billboard’s Hot 100 in 1967. Redding’s lyrics continue to resonate with listeners today.

With lyrics by Otis Redding and illustrations by Rachel Moss, this irresistible book shows a young girl, her brother, and her parents conjuring as many positive futures for each other as they can dream. Packed with playful vignettes as they imagine a life full of possibility, Respect provides families an opportunity to explore themes of mutual respect—while revisiting one of the greatest songs ever written.

About Otis Redding and Rachel Moss

Otis Redding (1941–1967) was a singer, songwriter, and producer often referred to as the King of Soul™. Known for releasing such acclaimed songs as “These Arms of Mine,” “Try a Little Tenderness™,” “Hard to Handle,” and “(Sittin’ on) The Dock of the Bay,” Redding is considered to be one of the most influential singers and songwriters of all time.

He received two GRAMMYs as well as a GRAMMY Lifetime Achievement Award, and was inducted into the Rock & Roll Hall of Fame and the Songwriters Hall of Fame. To learn more, visit: otisredding.com

Rachel Moss (illustrator) is a graphic designer in love with the bright colors and vibrant energy of the Caribbean. She was born in Jamaica and studied animation in England at the University for the Creative Arts. Moss now lives in Jamaica where she spends her days illustrating children’s books such as African with song lyrics by Peter Tosh, I Am a Promise by Shelly Ann Fraser Pryce, Abigail’s Glorious Hair, and Milo & Myra Learn Manners with Mr. Mongoose. Find Rachel on Instagram: https://www.instagram.com/rachelmossillustration/

We Got the Beat 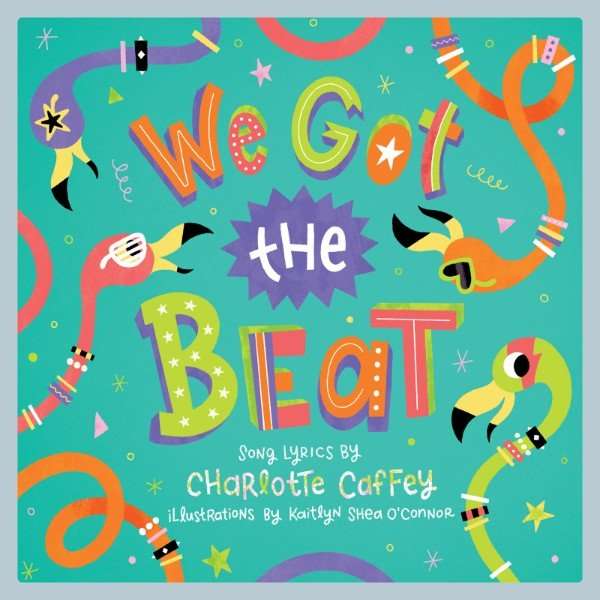 An exuberant celebration of dance and play in picture book form, based on Charlotte Caffey’s joyful classic made famous by the Go-Go’s.

We Got the Beat is a children’s picture book based on the hit song by the 1980s new wave group the Go-Go’s. Consisting of five members, the all-female band rocked the nation with their charisma and musical genius. Their hit song “We Got the Beat” spent three weeks at #2 on the Billboard 100 and became their signature song. Says the New York Times: the Go-Go’s “taught a new generation the power of the girl gang.”

With lyrics by Go-Go’s member Charlotte Caffey and illustrations by Kaitlyn Shea O’Connor, this picture book tells the story of what it is like to live life dancing to the beat, while enjoying friends, nature, and the fun that surrounds you. We Got the Beat will make both parents and children get their groove on and show off their best dance moves.

This book is so colorful and fun! I love how the illustrator “gets” the fun nature of the song.

Charlotte Caffey is a singer-songwriter best known for being a member of the all-female new wave group the Go-Go’s. Caffey wrote the hit single “We Got the Beat” and has cowritten songs for other artists such as Keith Urban and the theme song for the television series Clueless. The Go-Go’s became one of the foundational bands of the 1980s, with their 1981 debut album Beauty and the Beat going double platinum and topping US
Billboard charts for six weeks. The band has sold more than seven million records across the world. Caffey continues to write and perform.

Kaitlyn Shea O’Connor (illustrator) is an illustrator and designer hailing from Atlanta, Georgia. She combines traditional skills with digital media to create vibrant, whimsical worlds. She’s a rare hybrid of dog and cat lover, an avid whistler, and she enjoys exploring the great outdoors, trying new cheeses, and cozying up in a nook with a book. Find her on Instagram: https://www.instagram.com/designed.by.shea/ 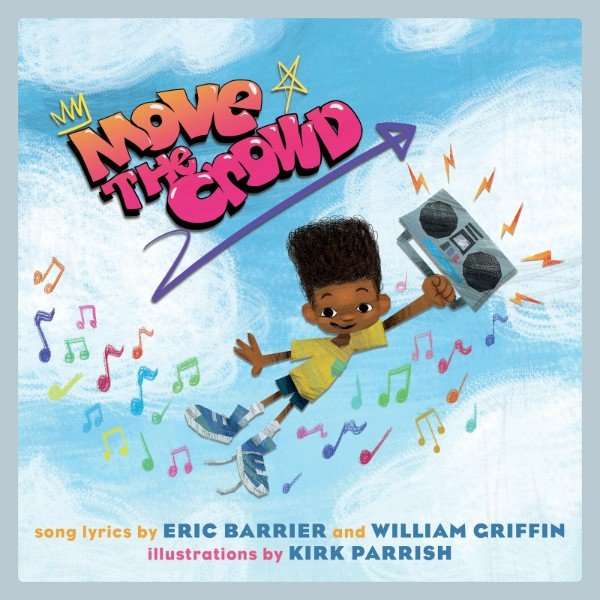 Oh no! I don’t know this song! Inconceivable! Well, it came out in 1987, and I was into hair bands and pop music. It wasn’t until college that I listened to any rap, and I guess this just wasn’t one I listened to. Give me a little “It Takes Two” or “Push It” and I’m there. But this little book is so bright with fun illustrations that will take you back to the 80s with break-dancing and boom boxes.

Innovative illustrator Kirk Parrish brings the iconic song “Move the Crowd” to life for the first time as a children’s picture book. The lyrics to Eric B. and Rakim’s hit song provide the inspiration for this instant classic.

Follow along as Parrish pairs the lyrics with colorful illustrations about a boy being absorbed into his stereo and dropped into a colorless world where the music is dull and the people uninspired. The ensuing transformation he brings to the crowd with his music is one that the whole family can enjoy together.

Kirk Parrish (illustrator) grew up on a little island just outside of Seattle. As a youngster, he developed a fondness for scribbling caped superheroes and yearned to one day become a grand-master ninja. Today, Parrish has (mostly) put down his ninja aspirations and is an illustrator and designer, currently based in Seattle. Over the last decade, his artwork has appeared in video games, animation, publishing, and advertising. Follow Kirk on Instagram: https://www.instagram.com/kirkparrishart/

These Boots Are Made for Walkin’ 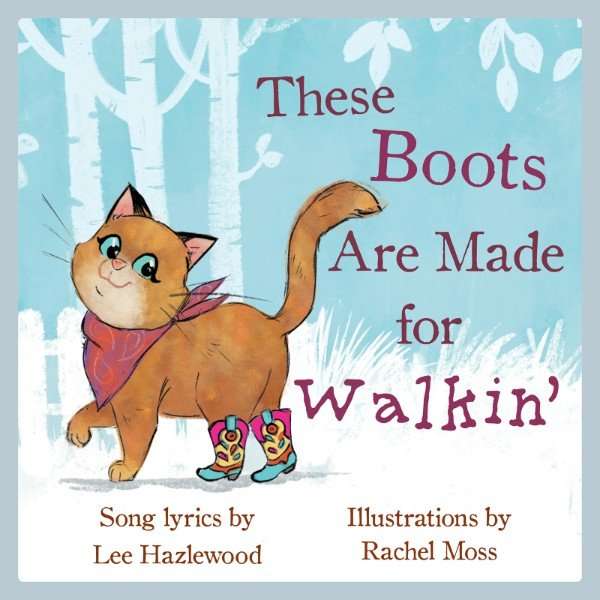 Lee Hazlewood’s tough-talkin’ hit song (popularized by Nancy Sinatra) is adapted into a playful children’s book about the inner life of a jealous cat.

Here is another song that I’m sure you’ve heard! I only know the chorus, but it’s got to be one of the most famous songs ever. The illustrations by Rachel Moss are so cute! She captures the cat’s personality so well.

These Boots Are Made for Walkin’ is an adorable story of friendship and family set against the backdrop of Lee Hazlewood’s iconic song. While there have been numerous recordings over the past several decades, “These Boots Are Made for Walkin’” was originally recorded by Nancy Sinatra and released in early 1966 to instant success. A #1 Billboard hit in the US, UK, Canada, and Australia that was nominated for three GRAMMYs, Hazlewood’s song continues to be embraced to this day.

With lyrics by Lee Hazlewood and illustrations by Rachel Moss, this captivating picture book tells the story of a boy and his extremely attached and very jealous cat who must adapt to the introduction of a new family member—a puppy. The funny story line and delightful images are sure to have the entire family curled up and laughing together, pets included!

“‘These Boots Are Made for Walkin’ is one of the most famous pop songs of all time.” —New York Times

“The hit written by Lee Hazelwood took pop to places it had only previously fantasized about . . . This oddball song was a tough-talkin,’ heavy-stridin’, even fetishistic assertion of grrrl power . . .” —Financial Times

One winner of the 4 LyricPop books above (ARV $68)