Mrs. Jeffries always keeps her friends close and now must keep an enemy even closer if she is going to catch a killer. . . .in Mrs. Jeffries Demands Justice. 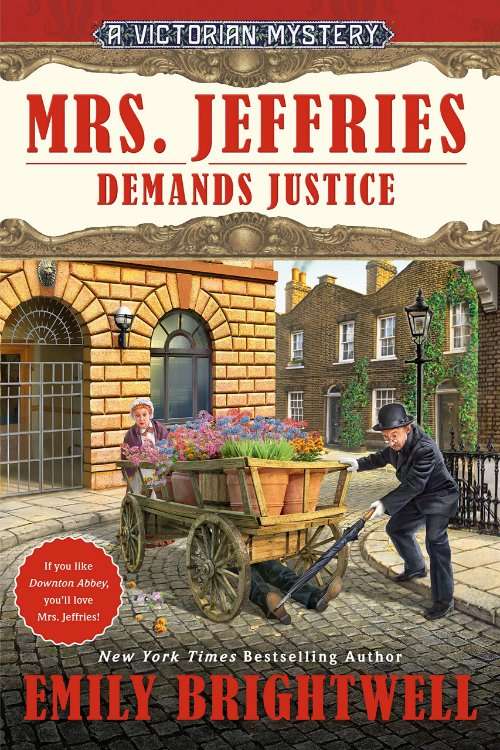 I received an ARC of this book free from NetGalley; however, all opinions are my own, and I was not required to give a review. This post contains affiliate links. If you make a purchase, I may receive compensation at no cost to you.

Inspector Nigel Nivens is not a nice man or a good investigator. In fact, he’s terrible at his job and has always done everything he can to make life difficult for Inspector Witherspoon. But even his powerful family can’t help him after he maliciously tried to hobble Witherspoon’s last homicide investigation. He’s been sent to a particularly difficult precinct in the East End of London as penance.

When a paid informant is found shot in an alley, Nivens thinks that if he can crack the case, he’ll redeem himself and have a much-needed chance at impressing his superiors. But there’s one big problem with his plan—Niven’s distinct antique pistol is found at the scene of the crime and even more evidence is uncovered that links the Inspector to the murder.

Despite their mutual dislike for Nivens, Mrs. Jeffries and Inspector Witherspoon know the man isn’t a cold-blooded killer. Now they’ll just have to prove it. . . .

In 2020 nothing was predictable, so it’s wonderful to be able to rely on Emily Brightwell bringing us another delightful Mrs. Jeffries book. In Mrs. Jeffries Demands Justice, Inspector Nigel Nivens is in trouble. If you’ve read other Mrs. Jeffries books, you know that he is not someone you’d want to defend. Nivens hates Inspector Witherspoon and is a crooked, deceitful inspector. But Mrs. Jeffries knows Nigel Nivens has been set up to take the fall for a murder he didn’t commit. And though none of the Witherspoon household staff would be sorry to see Nivens in prison, they don’t want a murderer to go free or an innocent man to take the fall.

What I love about these books most of all is the feeling that this staff, as well as their neighbors who help “solve” the crimes, are family. They may not be related by blood, but they care for each other. They care for their employer so much that they risk their own safety at times to gather clues.

Another thing that I appreciate about this series is that as it has progressed, Inspector Witherspoon has really grown more capable and become more confident in his abilities. It seems as if the clues “fed” to him are fewer than before, and he has truly become the inspector that Scotland Yard and his fellow constables believe him to be….and always have been.

If you’ve never read any books in the series, I suggest you start at the beginning. You don’t need to read every book if you want to get to this one quickly, but you do need to know how things were in the beginning and how they’ve progressed. Trust me though. They are all very enjoyable cozy mysteries! These are especially wonderful reads for those of us who like historical cozies too. As an Anglophile, I love that they’re set in England too.

I highly recommend this & all of the Mrs. Jeffries books!