You are here: Home / Books / 2 Children’s Books to Inspire Young Girls
Thanks for sharing!

Welcome to the Chasing Rainbows Giveaway Hop. Thanks to the sponsors, one of you will win these 2 books that will inspire young girls. The Stuff Between the Stars and Code Breaker, Spy Hunter share the stories of two women who changed the world! 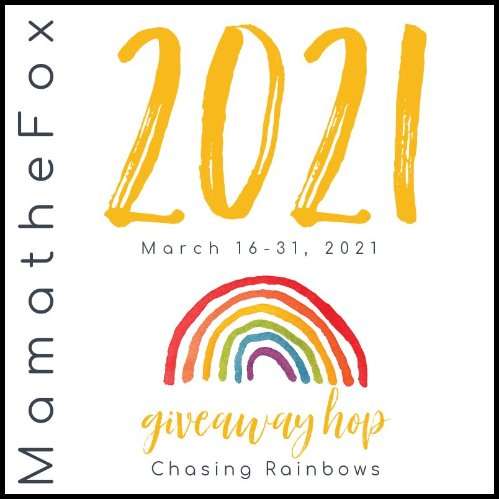 This hop is hosted by MamatheFox

The Stuff Between the Stars 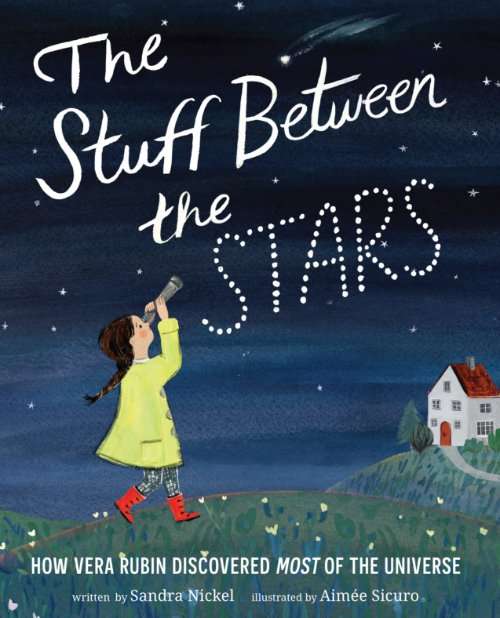 I received these books free; however, all opinions are my own. This post contains affiliate links. If you make a purchase, I may receive compensation at no cost to you.

Vera Rubin was one of the astronomers who discovered and named dark matter, the thing that keeps the universe hanging together. Throughout her career she was never taken seriously as a scientist because she was one of the only female astronomers at that time, but she didn’t let that stop her. 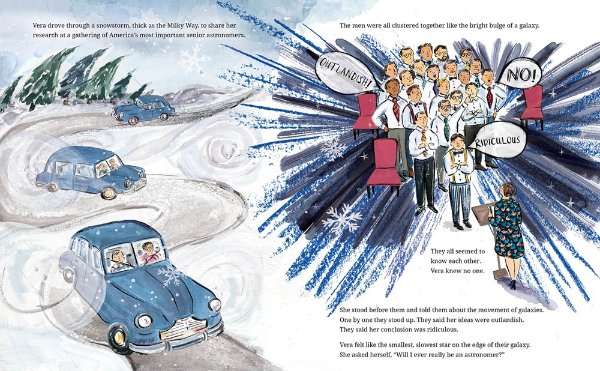 She made groundbreaking and incredibly significant discoveries that scientists have only recently been able to really appreciate—and she changed the way that we look at the universe. A stunning portrait of a little-known trailblazer, The Stuff Between the Stars tells Vera’s story and inspires the youngest readers who are just starting to look up at the stars.

My review of The Stuff Between the Stars

I loved The Stuff Between the Stars!  Though I did well in the subjects, I’m not a science/math person. I wouldn’t choose to study astronomy or calculus. Give me a good book, and I’m happy as a clam. This book actually made me as happy as a clam! I felt so much “girl power” happiness as I read about how Vera Rubin knew from a young age that she loved studying the stars in the night sky. 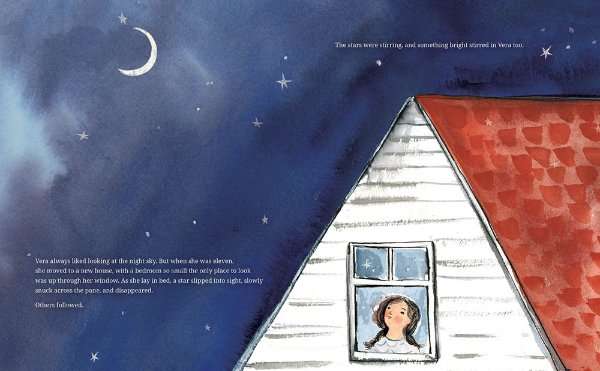 When she was in high school Vera learned that women weren’t welcome in a man’s world (of science). When she left for college, Vera was the only astronomy major in her class at Vassar. But she didn’t let that stop her from achieving her dreams. Men told her that her ideas about stars revolutions were rubbish, and she was discouraged. But instead of stopping, she formed a new hypothesis to study: were the galaxies any which way or did they follow a pattern? And much later: dark matter.

The Stuff Between the Stars is a book that you’ve got to read with your girls. They need to know that they have what it takes to discover the undiscovered, to cure the incurable, to solve the unsolvable. And, to break that unbreakable record. We must speak up. Our daughters deserve to compete on a level playing field. Vera Rubin is someone our girls should know about and look up to! I highly recommend using this book as well as those in the selected bibliography section of the book to learn about Vera and her accomplishments.

Sandra Nickel says that story ideas are everywhere; you just have to reach out and grab them. She holds an MFA in writing for children and young adults from Vermont College of Fine Arts. Her first book, Nacho’s Nachos: The Story Behind the World’s Favorite Snack, was a Golden Kite Award finalist. Sandra lives in Chexbres, Switzerland, where she blogs about children’s book writers and illustrators at whatwason.com. To learn more, visit https://sandranickel.com/.

Aimée Sicuro is an illustrator, picture book maker, and surface pattern designer who received a BFA in Illustration from Columbus College of Art and Design. She lives in Brooklyn with her husband and young sons. Visit her website to learn more.

Decode the story of Elizebeth Friedman, the cryptologist who took down gangsters and Nazi spies 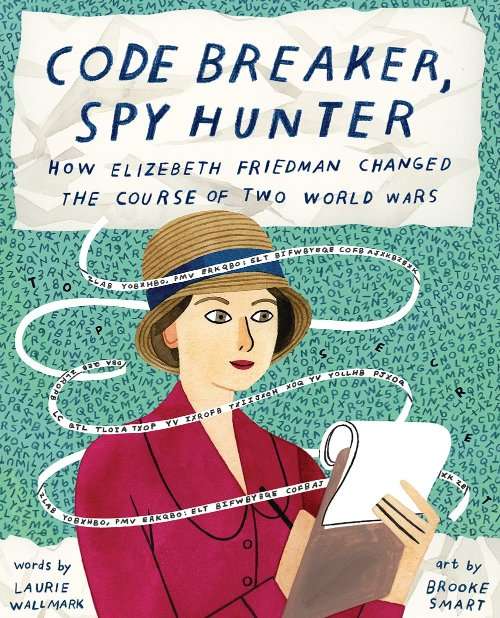 In this picture book biography, young readers will learn all about Elizebeth Friedman (1892–1980), a brilliant American code breaker who smashed Nazi spy rings, took down gangsters, and created the CIA’s first cryptology unit. Her story came to light when her secret papers were finally declassified in 2015. 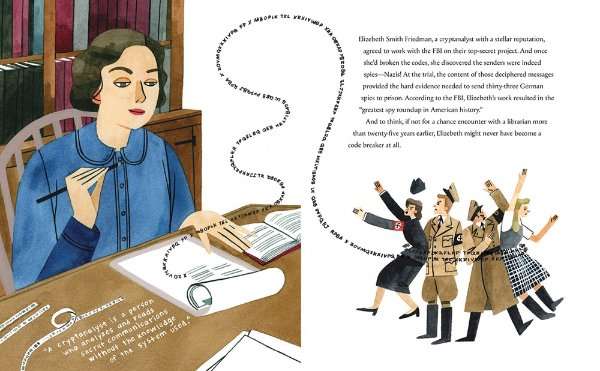 From thwarting notorious rumrunners with only paper and pencil to “counter-spying into the minds and activities of” Nazis, Elizebeth held a pivotal role in the early days of US cryptology. No code was too challenging for her to crack, and Elizebeth’s work undoubtedly saved thousands of lives.

Extensive back matter includes explanations of codes and ciphers, further information on cryptology, a bibliography, a timeline of Elizebeth’s life, plus secret messages for young readers to decode.

Do you remember “breaking codes” as a kid? I do! Highlights magazine usually had code puzzles, and we solved them in school. These were simple, fun activities, and we weren’t breaking codes to save lives. But Elizabeth Friedman was!

Through her love of languages and literature, Elizabeth also discovered a love of finding patterns in poetry which led to a love of breaking codes. When the government needed people to decode spy messages in WWI, she and her husband led the country’s first code-breaking unit, and they wrote their new techniques of code breaking down for others to study. In fact, now their methods are “considered the basis for the modern science of cryptology, the study of secret codes.” Their skills were needed again during WWII as codes became more difficult to break because of the Enigma machine.

Code Breaker, Spy Hunter is a fascinating book that I highly recommend you read with your kids. They need to know that math actually does have a purpose….you KNOW we think we’ll never need higher math skills! Who knows what codes will need breaking next?

Award-winning author Laurie Wallmark has written picture-book biographies of women in STEM fields ranging from computer science to mathematics, astronomy to code breaking. Her books have earned multiple starred reviews, been chosen as Junior Library Guild Selections, and received awards such as Outstanding Science Trade Book, Cook Prize Honor, and Parents’; Choice Gold Medal. She is a former software engineer and computer science professor. She lives in Ringoes, New Jersey. You can find her at lauriewallmark.com.

Brooke Smart loves telling stories through her illustrations, especially stories about brave women from history. She has always loved to read, and growing up she could be found nightly falling asleep with a book on her chest. Illustrating books as a professional artist is a lifelong dream come true. She is living the busy, tired, happy, wonderful dream in Salt Lake City, Utah, with her husband, their three kids, and their naughty cat named Sunshine. Learn more about her at brooke-smart.com.

One lucky winner will receive copies of The Stuff Between the Stars AND Code Breaker, Spy Hunter courtesy of Abrams Books for Young Readers (U.S. addresses).