You are here: Home / Books / Book Reviews / The Innkeeper of Ivy Hill Book Review
Thanks for sharing!

On a rise overlooking the Wiltshire countryside stands the village of Ivy Hill. Its coaching inn, The Bell, is its lifeblood–along with the coach lines that stop there daily, bringing news, mail, travelers, and much-needed trade. 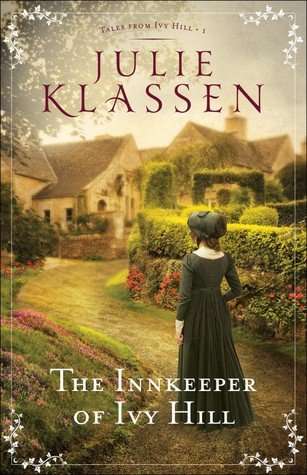 I was given a copy of this book free to review from Bethany House. This post contains affiliate links.

The Innkeeper of Ivy Hill

Jane Bell lives on the edge of the inn property. She had been a genteel lady until she married the charming innkeeper who promised she would never have to work in his family’s inn. But when he dies under mysterious circumstances, Jane finds herself The Bell’s owner, and worse, she has three months to pay a large loan or lose the place.

Feeling reluctant and ill-equipped, Jane is tempted to abandon her husband’s legacy and return to her former life of ease. However, she soon realizes there is more at stake than her comfort. But who can she trust to help her? Her resentful mother-in-law? Her husband’s brother, who wanted the inn for himself? Or the handsome newcomer with secret plans of his own . . . ?

With pressure mounting from the bank, Jane struggles to win over naysayers and turn the place around. Can Jane bring new life to the inn, and to her heart as well?

My Review of The Innkeeper of Ivy Hill

If you are a lover of Regency Romance, The Innkeeper of Ivy Hill is a book you’re going to want to add to your TBR piles. Jane Bell has been spending her past year just existing. Her husband, John, along with his mother Thora, had been in charge of running The Bell, a coaching Inn, before John’s untimely death. John shocked everyone by leaving The Bell to his wife Jane. Jane knows nothing of business since she was reared in the genteel society.

When a loan that Jane knew nothing about comes due, Jane is forced to make a decision: either sell The Bell or make changes which will bring in business. Neither of these choices is easy. If she sells, many people will lose their jobs. If she keeps the business, it will take money for improvements. Jane takes the wise council of the inn’s farrier and decides to keep The Bell. In the meantime, her mother-in-law returns. Jane thinks Thora doesn’t like her, but she finds that they are more alike than either of them think.

I really enjoyed the story line in this book, though it really just lays the foundation for the series. It’s more a story of village life than one person’s story. There is some romance in the book, but it doesn’t play a major role. The story leaves you wondering about the future romances which will certainly follow in the coming books. I like the quirky characters that the author includes. They add life to the story.

The book is slow moving in some parts, but that is reminiscent of regency novels. It has a bit of intrigue and a bit of conflict, but it is mostly just the story of one family’s efforts to keep their business…with some side stories thrown in.

I do think that fans of Julie Klassen and regency novels will enjoy this one very much.


Thanks for sharing!
« Paleo And Proud? How To Kick It Up A Notch
Blue Jeans and Coffee Beans by Joanne DeMaio Book Review »