You are here: Home / Entertainment / See The Dinner Detective Murder Mystery Dinner Show
Thanks for sharing!

Disclosure: I received 2 tickets to The Dinner Detective to facilitate a review. All opinions are my own.

I know what you’re thinking. Murder mystery? Dinner theater? Cheesy. Nope, not this one! There are no costumes, and there is a lot of audience interaction. The actors are eating dinner with you! You will only know who the detectives are during the show….and the murder victim.

My friend Shannon and I attended The Dinner Detective Murder Mystery Show at the Hilton Garden Inn in Cleveland, Ohio. When you arrive, you’ll be given a table number and a name tag. You’ll give yourself an alias, so, of course, I picked Sydney Bristow….whom apparently only one of the hosts knew! Come on! ALIAS! It was the best show. Oh well. Shannon was Veronica Mars.

A four course meal awaits you as the story unfolds around you. Don’t worry. Your hosts will explain things to you before the detectives come out for interrogation. You’ll be given questions to ask your fellow diners, if you want, so you can get some clues as to who the killer might be. Of course, you’re supposed to lie! Now the actual actors might give you some hints as to who they are, but they might not. It is so much fun! The detectives will find clues that they’ll share with you throughout the dinner. You’ll get everything you need to solve the crime, and several diners will figure it out. Whoever gives the best explanation wins the prize!

I was able to ask Scott O’Brien some questions about The Dinner Detective.

How did you become involved with David E. Kelley and what is one thing that he taught you that stands out the most?

I was working in the film world (American Pie, Final Destination, Cats/Dogs) and had an assistant position with a writing management and film production company.  We shared office space with a talent agency at the time.  In 1999, I had a conversation with one of their principles and the topic of “what I wanted to do with my life” came up.  When I mentioned work in tv for David, they said they knew someone who worked there.  A position was available in the corporate office at the time and I was recommended.  I remember telling them that I would take any position just to get my foot in the door.  This was my dream job.  Over the years I moved around the company until I was finally in a position that I truly enjoyed….the writer’s department.

David’s talents in writing are obvious to the world, but what most people don’t see are the inner workings behind the scenes and how he runs his company.  I never heard him yell or threaten people.  He led by example.  He was a family man and often brought the kids to work.  He didn’t have crazy hours either.  In at 9:00 and out by 5:00.  He was very loyal to his co-workers and always brought in directors/producers/writers with whom he had worked with in the past. It was an amazing experience to work with some of the best people in television at the height of his career.

What gave you the idea for The Dinner Detective?

In early 2004, my wife (Kelly) dragged me to a murder mystery dinner show in Southern CA. I had a bad feeling about it from the start and by the end of the night, my intuition was correct. I had just spent over 3 hours sitting through a very campy and hokey show using “play” money to solve an illogical story line. The irony, though, was this company had been doing the same shtick for 20+ years and was still packing the house every weekend.  On the drive home, I couldn’t stop complaining about how it could have been so much better if this or that had happened.  At the time, Kelly and I were both working for David and thought the genre of mystery dinner theater could definitely use a CSI type update. It was at that moment “The Dinner Detective” was born.

Are the shows all written by you or do you collaborate with the local hosts?

All of the shows have been written or co written by me.  We currently have four rotating scripts and three are fully written by me. 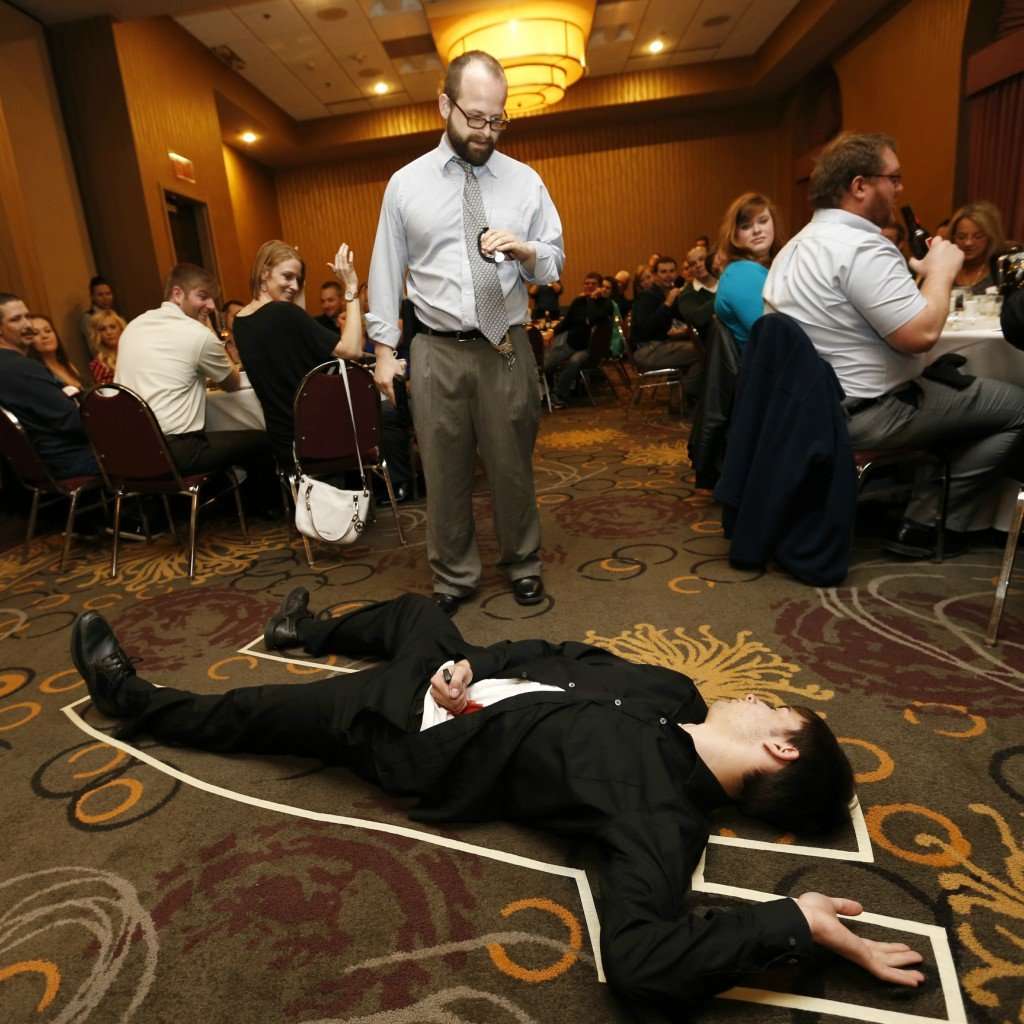 Is there anything you’re just “dying” to get off your chest and tell my audience?

The biggest hurdle we have faced is getting people to believe that we are not like other dinner or murder mystery shows.  There is such a negative stigma attached to so many murder mystery shows around the world because they are so terribly outdated.  The Dinner Detective is the largest, award-winning, interactive comedic murder mystery dinner show in the United States.

We are now running public and private shows in cities across the country every single week.  Our shows are set in the present day.  Unlike other murder mystery dinner shows, here you will find no cheesy costumes, no recited campy dialogue and no hokey song and dance.  Our performers are dressed just like everyone else, leaving all of the guests to suspect who is a part of the show and who is not.  In many instances, guests are seated with the performers and don’t even realize it until they die…the performers, that is!  Our Detectives proceed to interrogate everyone and find clues as more people die.  At the end of the night, prizes are awarded to the Top Sleuth who solves the crime.

The Dinner Detective is a blast. The food is great, the atmosphere is fun and light, and the actors blend in seamlessly. A lot of the show is improv because the detectives will interrogate audience members who aren’t actors. They’ve got to think on their feet, and they do it well. I got interrogated by one of the detectives, so I had to think on my feet too. You might want to come up with a cover story JUST in case….Unless you are the murderer! Well, you won’t be, but while you can’t be the murderer, you can be the victim if you choose to be.

The people we sat with at our table were a lot of fun. They ended up not being a part of the show, but for awhile, I did suspect a couple of them, just like they suspected me. The entire show and dinner goes really quickly and smoothly. The coordinators of this event were great. They’re very friendly, and they made it fun.

After the show, Shannon and I talked to a few of the actors to find out how they got into the show. One girl said she’d just responded to an ad, and she was chosen to participate. She said she has fun and gets a meal out of it too! There are gratuity envelopes on the tables, so be prepared with cash to tip the actors. The shows run on Saturdays, but she said during the holiday season, they do more. They also do private events. The shows rotate, so you probably won’t see the same show twice if you go more than one time. The actors may be the same, but the murderer is not the same each show. It’s really very well done!

If you have The Dinner Detective anywhere around you, I highly recommend you go. You will definitely be entertained. I look forward to going again!

Thanks for sharing!
« Adorable Owl Themed Baby Shower Ideas
7 Tips to Get Your Kid Ready for Going Back to School and Outfit Ideas »