I’ve got great news for all you CARS fans! CARS 3 is available on HD Digital and the Blu-ray, so you can watch whenever you want. Did you read my post about my son , Kyle, and CARS? He was 8 years old when CARS first came out, and he just turned 20 last week! Now that CARS 3 is out, it makes me very nostalgic. Go back and read that post if you’ve got time. Today, I’ve got some CARS 3 themed party ideas for you from some awesome bloggers (and me)!

Thanks to Disney, I was able to visit Disney California Adventure free. All opinions are my own.

2017 is the first year that Disney California Adventure is decorated for Halloween. If you’ve got plans to visit during the Halloween season, you’re in for a treat. I love the decorations and wish I had room to share ALL the pictures!

Mater, Lightning McQueen and the residents of Cars Land transformed the town of Radiator Springs into Radiator Screams for Halloween Time and guests are invited to join the frightful fun. As the Cars prepare to celebrate Halloween, or as they call it “Haul-O-Ween,” they decorated their establishments for the occasion. They are even wearing their favorite “car-stumes” to celebrate. This festive celebration ends Oct. 31, 2017, so if you can get there this year, do it! 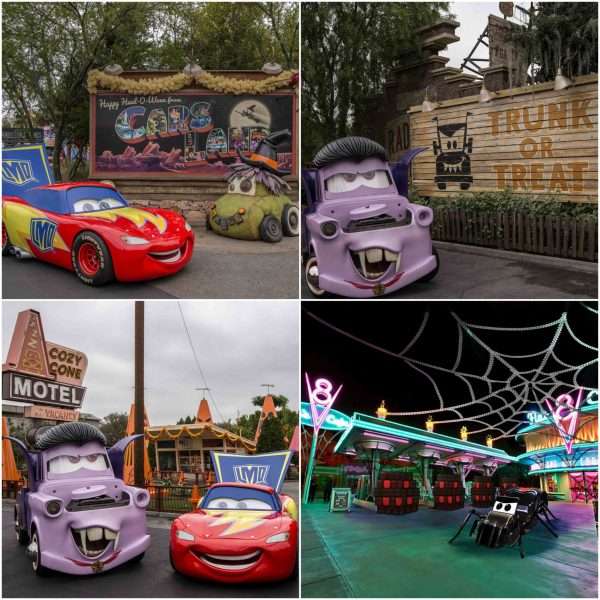 Not only are they all decked out for Halloween, two of the rides have been transformed into Halloween-themed rides! Mater’s Junkyard Jamboree is now Mater’s Graveyard JamBOOree. He’s got some creepy, new songs and fun haunted twists on other hits, including “Monster Truck Smash” and “Welcome to Radiator Screams” that play as you whirl around the graveyard. 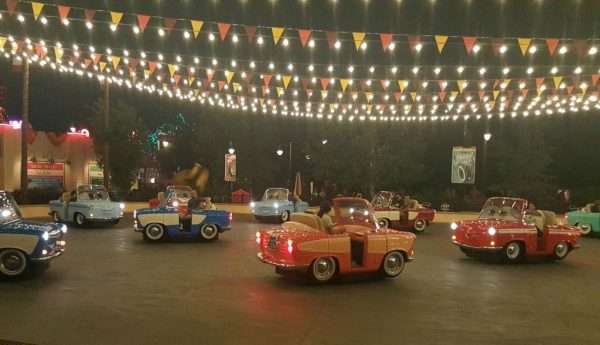 Luigi’s Rollickin’ Roadsters is Luigi’s Honkin’ Haul-O-Ween until October 31. It’s an all-new spooktacular dance celebration where Luigi and Guido entertain the cugini (cousins) with Halloween twists to traditional Italian festival songs like the “Terror-antella,” “The Chop Top of Carsoli” and more.

It is so cool! This ride doesn’t go on any tracks; it is controlled by GPS! Each song is programmed into the computer and the cars follow the GPS according to which song is playing. I loved it.

My favorite ride in Cars Land is Radiator Springs Racers! It is so much fun, I could ride it all day. Anyone who loves fast-ish rides with small-ish hills will love this…especially if they are CARS fans! 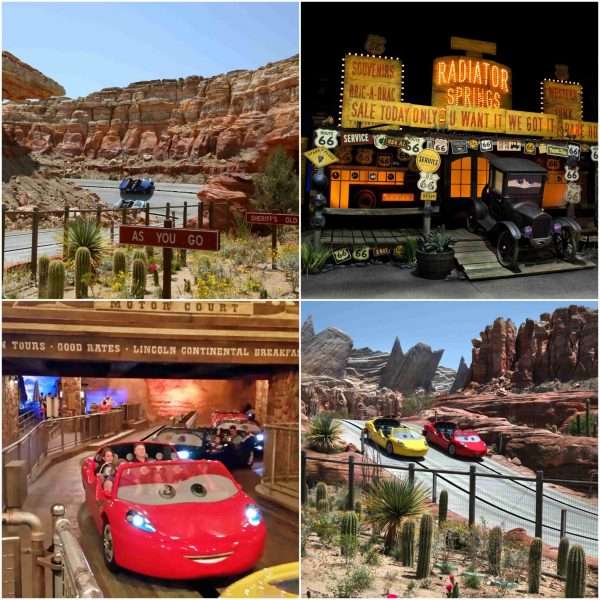 In order to get the most of your visit to Disney California Adventure and Disneyland, you should definitely consider a MaxPass! This is especially important during busy times, and if you want to get all you can out of Cars Land, a MaxPass will come in handy! You’ll get unlimited Disney PhotoPass downloads (including magic shots, attraction photos and select Character dining photos) and the convenience of mobile Disney FASTPASS through the Disneyland App.

A CARS 3 party inspired by Haul-O-Ween

Since you might not be able to get to Disney California Adventure this Halloween, I’ve got some fun ways you can experience the magic at home! 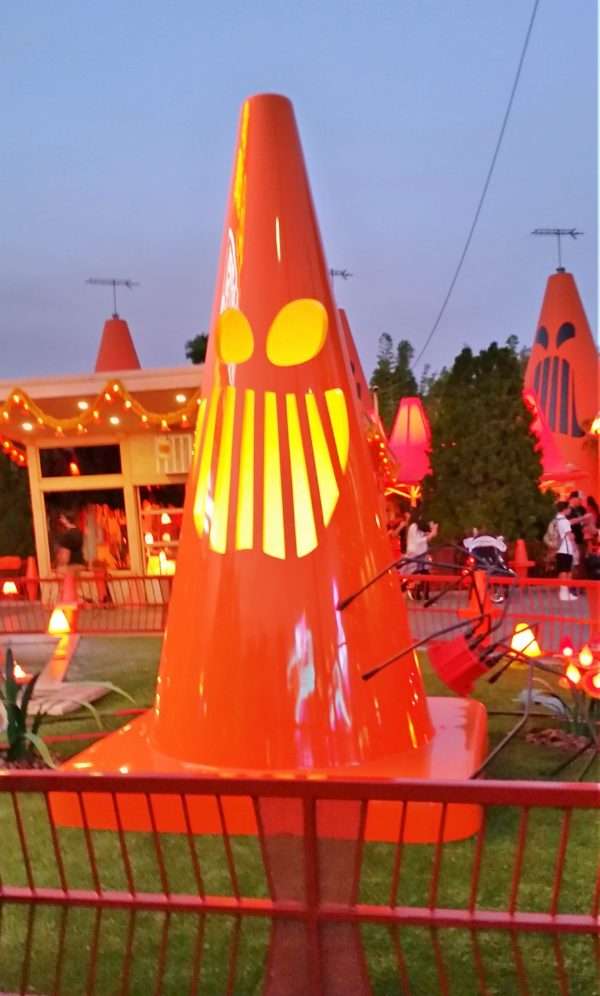 What movie watching party would be complete without popcorn? I bought orange play traffic cones to use for the craft below, but you can serve popcorn in the cones while you watch Cars 3 first! Of course, kids are totally going to spill the popcorn, but they’re gonna spill it anyway…and throw it at each other. You know, popcorn is fun. 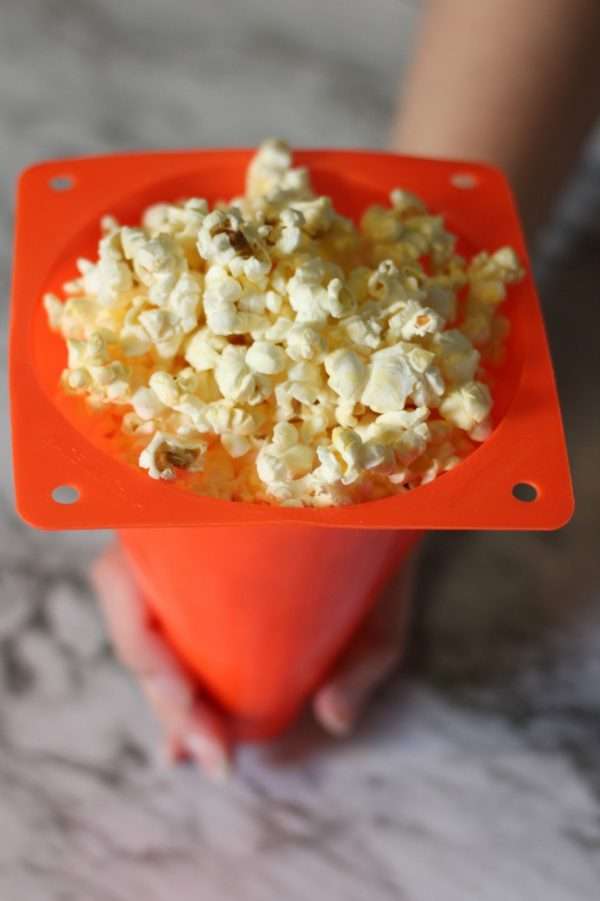 How to make cozy cone jack-o-lanterns

You only need to purchase two things for this craft (as long as you have scissors and glue or tape): orange play traffic cones and black foam sheets. 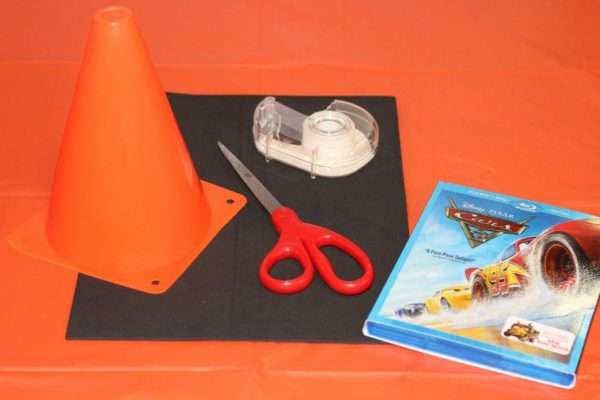 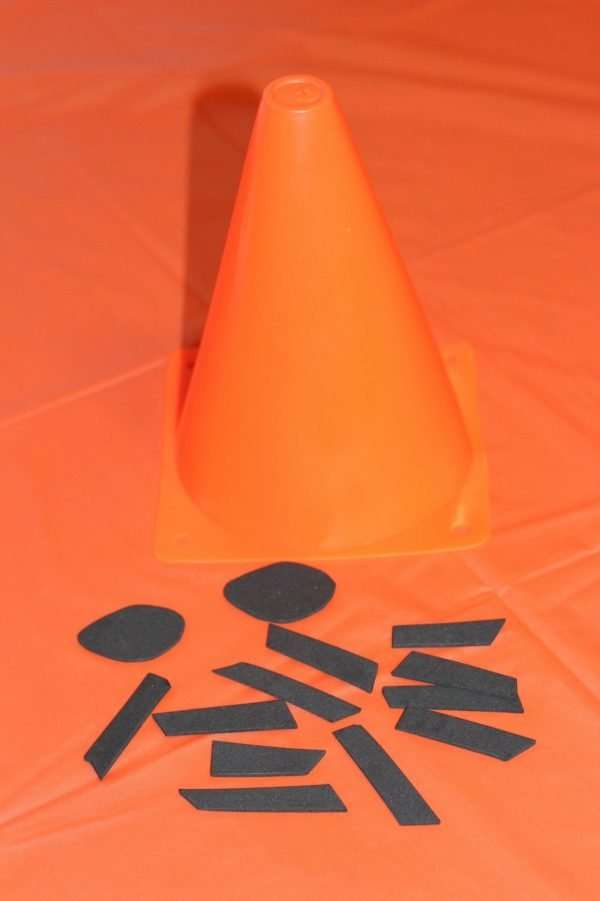 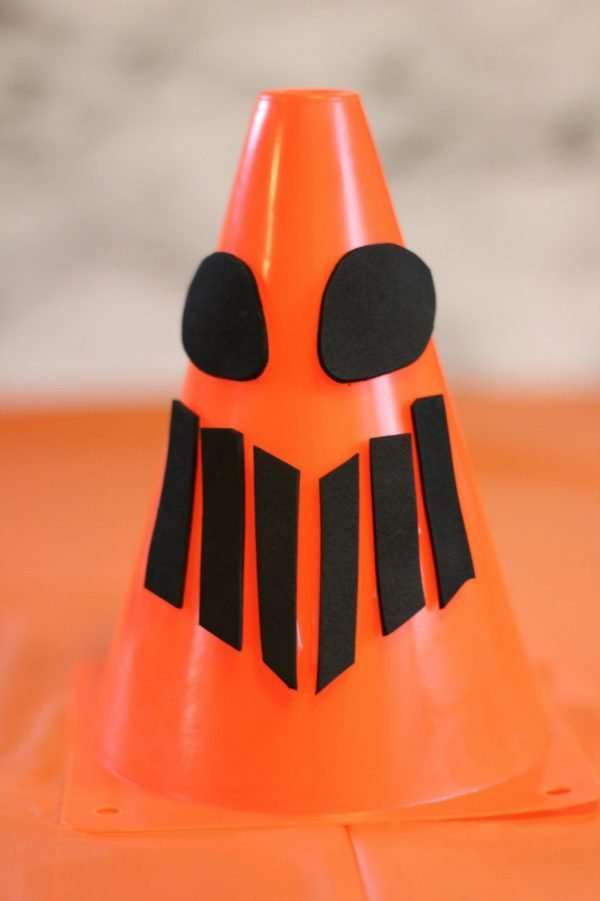 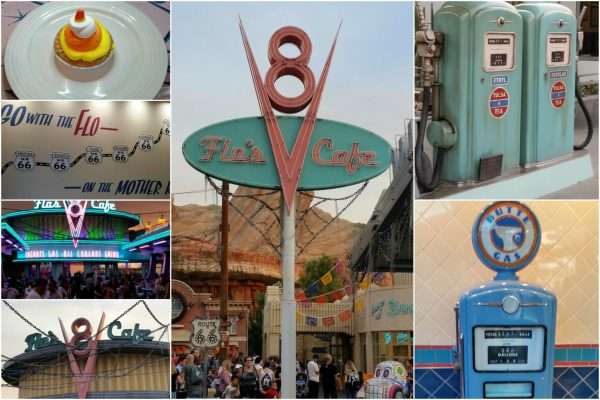 These little pies are something you will want to make ahead of time. They are inspired by the Candy Cone pies served at Flo’s V8 Cafe during Halloween time. I used yellow food coloring instead of paste, so my yellow is not nearly this bright. I am sure if you use paste food coloring, you’ll get the colors much closer. 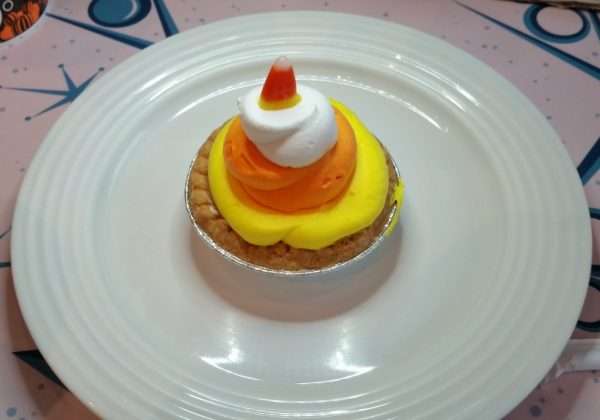 We totally went EASY with this by using Jello No-Bake Cheesecake and whipped cream in a can! My daughter made them, so I take none of the credit. Her friends ate lots of them, but we had several leftover, whew! She used 3 boxes of the cream cheese filling, but only 2 boxes of the graham cracker crumbs. It made 24 little pies.

She used these little aluminum pie pans, and made the graham cracker crumb crust according to the directions on the box. Like I said, this takes 3 packs of the cheesecake filling, so if you’ve got a big mixer, you can do all that at one time. The bottom “yellow” layer takes the most of the filling. We really did try to get it yellow-er! You want to fill the yellow layer all the way to the top and then put them in the refrigerator for an hour at least.

You need to use pastry bags for the orange layer and squeeze it on like Molly is doing here. 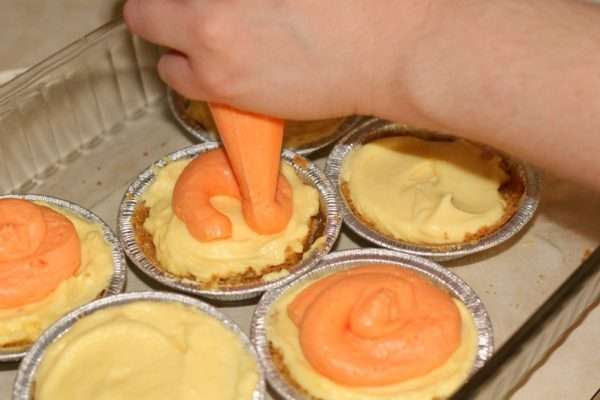 Finally, squeeze some Reddi-Whip on top and stick a cute little candy corn in the top! In Cars Land, Flo does not use cheesecake for her pies. She uses chocolate, vanilla and butterscotch pudding, but for this Cars 3 viewing party, we like our cheesecake! 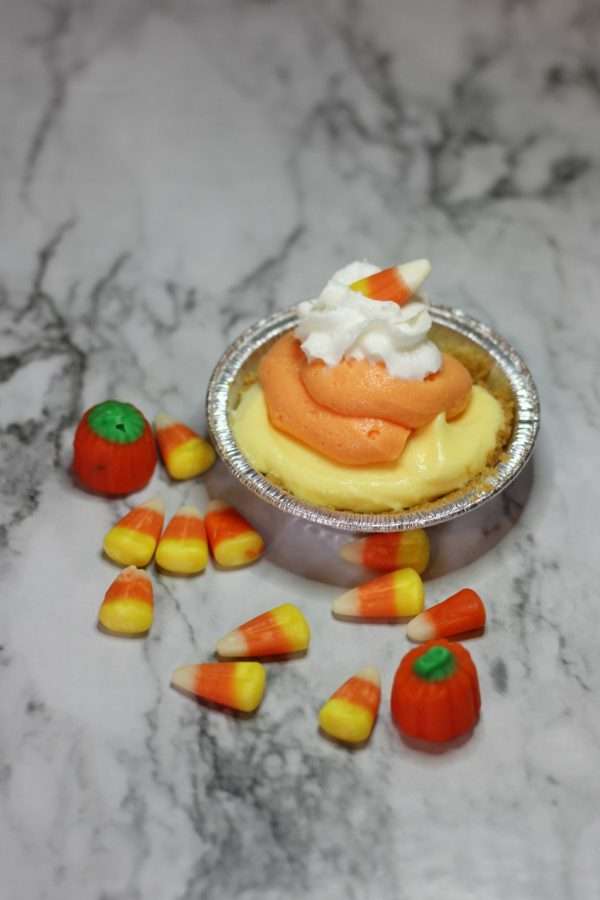 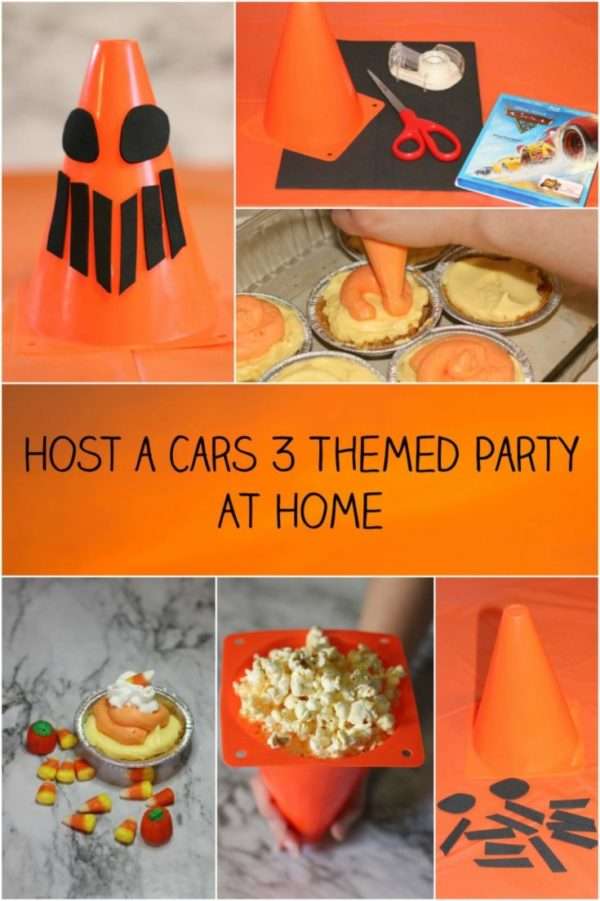 Thanks for sharing!
« 4 Things to Do if You Inherit a Property
Exclusive Interview with the President of Marvel Studios: Kevin Feige #ThorRagnarokEvent »