You are here: Home / Entertainment / Movies / Marvel / Exclusive Interview with the President of Marvel Studios: Kevin Feige #ThorRagnarokEvent
Thanks for sharing!

Thanks to Marvel Studios for allowing me to interview Kevin Feige as part of the Thor: Ragnarok Event.

If you know Marvel Studios, you know Kevin Feige. Feige has been president of Marvel Studios since 2007 and has produced many of Marvel’s films in his years with the company. 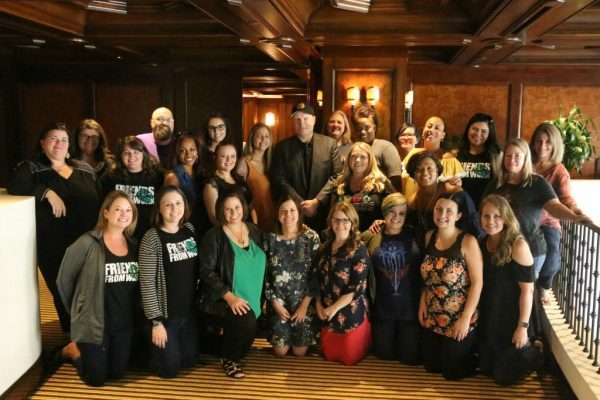 Exclusive Interview with the President of Marvel Studios: Kevin Feige

As part of my recent press trip for the THOR: RAGNAROK event, I had the huge privilege of interviewing Kevin Feige. This was a total (and amazing) surprise since he was not on our list of interviews. 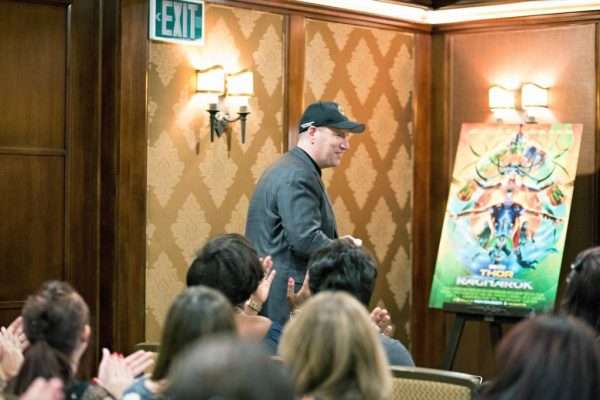 Shortly after Kevin Feige walked in for our interview, he asked us if we liked the film. Of course, we raved over it. If you read my review of THOR: RAGNAROK, you know how much I love it! If you didn’t, go back and read it!

GUARDIANS OF THE GALAXY, THOR: RAGNAROK, and INFINITY WAR

Right away we asked Feige about how he felt about having GUARDIANS OF THE GALAXY VOL 2. and THOR: RAGNAROK coming out the same year. “It’s pretty awesome and I love that little Peter Parker in high school is in the middle of all that. It’s pretty cool and it indicates what I’ve always wanted people to understand: that just because something’s based on a comic doesn’t mean they’re all the same.  [It} doesn’t mean they all inhabit the same exact …tonal world, and these were our three movies this year. I always knew [it] would be pretty exciting.” 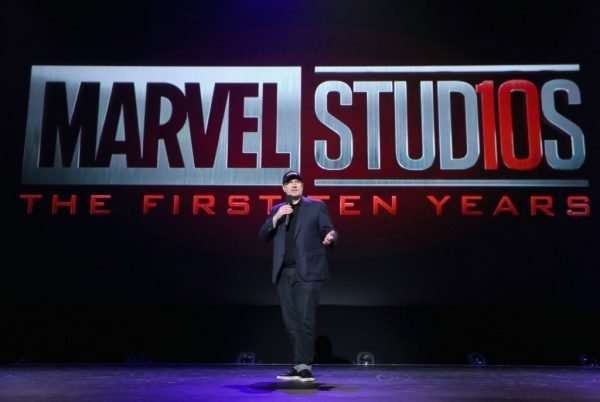 When we asked Kevin Feige if Thor would meet the Guardians of the Galaxy in the future he had this to say: “Yes, and it comes out in May of next year.” We all laughed, and I crossed my fingers hoping I’ll be there for THAT one’s premiere.

Following up on that answer, we asked if that would be a major set-up or a cameo: “No, INFINITY WAR is a pretty major meeting of minds, and Thor, in particular, with the Guardians. We’ve already shot some very fun scenes between them.  The cosmic adventurers spend a lot of time together in that movie.”

Of course, we tried to find out when the INFINITY WAR trailer is dropping…sigh. He laughed and replied, “Someday. Someday.” And so we wait. 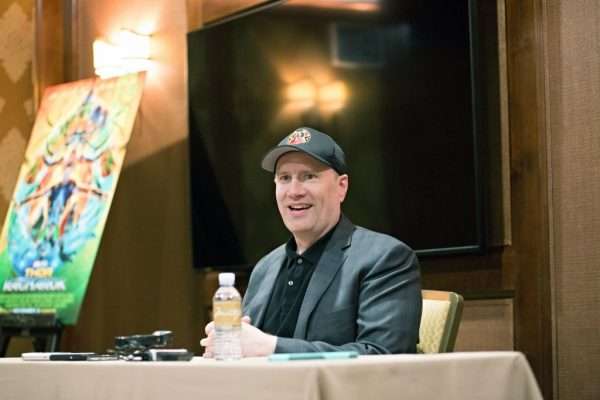 The new look and feel of Thor in THOR: RAGNAROK

I’m sure you can tell from the THOR: RAGNAROK trailer and art that it has a totally different look and feel than the previous Thor movies. If you’ve not yet watched the trailer, you can see it now:

We asked Feige why this Thor is so different from the others: “That was our idea perfected and improved by Taika.  We wanted to, as we always do in our movies, go to a new [unexpected] place. Look at what we did with Shane Black’s IRON MAN 3, the third CAPTAIN AMERICA film CIVIL WAR, and we always look at a third film, INFINITY WAR in the case of Avengers coming up, as an opportunity to take what the fans like, that they’re willing to go with us and take them to a totally unexpected fun place.”

Feige said that Chris Hemsworth would ask him who HE was getting in the THOR movies since Captain America got Iron Man and Black Widow in his movie. We laughed as he went on. “I’d go, I think he’s right. I think he’s right. The fun thing about Thor is he’s got amazing characters in his own comics, so Hela and Valkyrie from his books and from the mythology. We knew we wanted to bring [those characters] in there, but thinking about who else we could bring in  from the universe. Very quickly we realized Hulk would be that guy. But seeing Thor and Hulk battle it out together is great. Seeing Banner and Thor being fish out of water is even better. So, suddenly, you have this great dynamic between them. We decided well, I guess Hulk, when we last saw him on a Quinjet heading up into the atmosphere, he kept going. And he got caught in a wormhole, and he ended up on Sakaar.”

No spoilers and Hulk

I feel like the next part of the interview is sort of spoiler-ish, so moving on… You all know that Hulk is in the movie, but someone wanted to know if Hulk would get another stand-alone movie. Kevin Feige had this to say, “We think it would be fun to bring them to the screen, [but] how we do that, I’m not sure.  In terms of stand-alone Hulk movies, there are various contracts with studios that have to be worked out.  I’m just so happy that we have the ability to include Hulk in these ensembles and in what we already have planned.”

An all female movie? #girlpower

We asked Feige how he’d feel about an all female movie. “I think we certainly have enough powerful characters to do that.  When and how, I don’t know. I recently found myself in an undisclosed location; somebody tapped on my shoulder and I turned around and there was Scarlett Johansson, Brie Larson, Karen Gillan, Tessa Thompson, Pom Klementieff, all saying, hey, when are we going to do a movie? So that was pretty overwhelming.  Zoe Saldana was also standing there.” 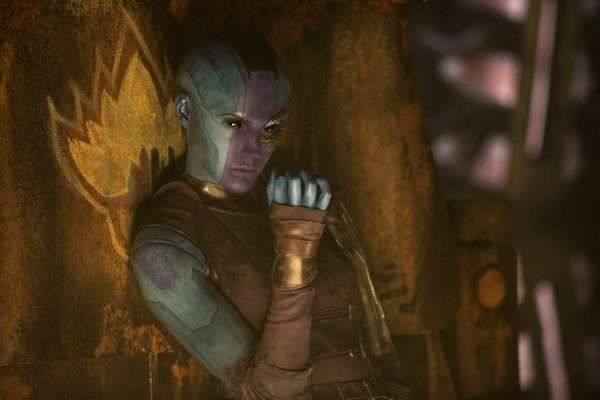 I think that would be totally cool to see all of these strong women in their own film. I’m looking forward to seeing if Feige can work that in the future.

It’s all about balance 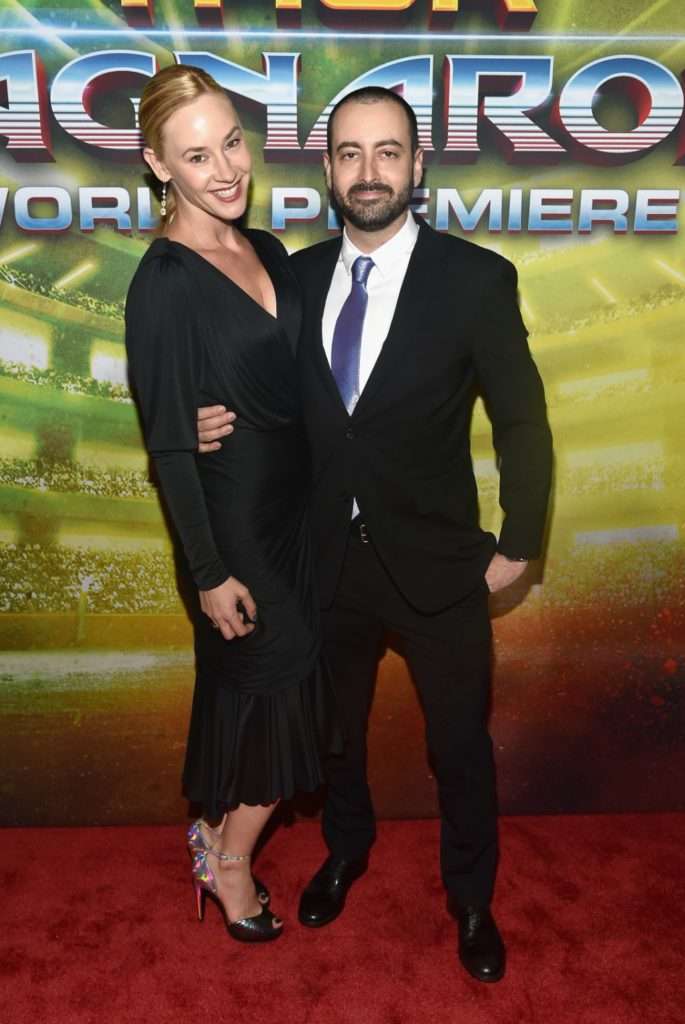 You know how it is. You’ve got ten things going on at one time; you’ve got twenty tabs open at all times. We wanted to know how Kevin Feige balances all the films he has coming out.

I love his answer. “You hire Taika Waititi, you hire James Gunn, you hire John Anthony Russo, and I’ve got an incredible team at Marvel Studios. Each film has a single embedded Executive Producer on it who oversees it. Brad Winderbaum, Executive Producer on this movie, has lived with Taika for the past two and a half years.  He moved his family to Australia for months and months. They’re on it the whole time, so I’m always a text or a phone call away of knowing exactly what’s happening anywhere at any given time. So it’s a great privilege to have this team in place.  Most of us have been together for almost the entire ten years at the studio which is very unusual in Hollywood. It’s great.”

It IS great. Sitting down with Kevin Feige was such an amazing experience. What would you have asked him had you been there?

Thanks for sharing!
« Host a CARS 3 themed Haul-O-Ween Party
Reasons to Watch Vampirina with Your Kids: Interview with Chris Nee #Vampirina »