You are here: Home / Entertainment / Television / Reasons to Watch Vampirina with Your Kids: Interview with Chris Nee #Vampirina
Thanks for sharing!

I’ll admit it; I love VAMPIRINA! I have a 20-year-old son and an almost 23-year-old daughter, so they are way past the Disney Junior stage. I watch it anyway. When I found out that VAMPIRINA and interviewing its executive producer, Chris Nee, were going to be part of my Disney press trip, I had to check the show out. I started following Chris Nee on Twitter (@chrisdocnee) and watched the episodes that were released. I fell in love with the show as well as its characters. I’m here to share with you just why you should watch VAMPIRINA with your kids! 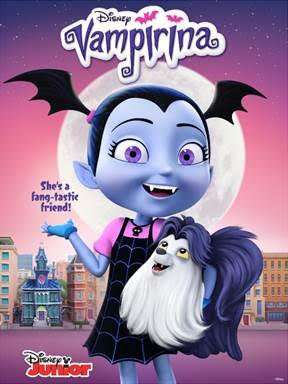 Getting to interview Chris Nee was a pleasure. She is so passionate about VAMPIRINA, and you see how much joy she exudes while talking about this show. At the very beginning of the interview, she made it clear that she wants to create shows that are for families to watch together. “…what I really want to do is bring families together to watch shows.”

Reasons to watch VAMPIRINA with your kids 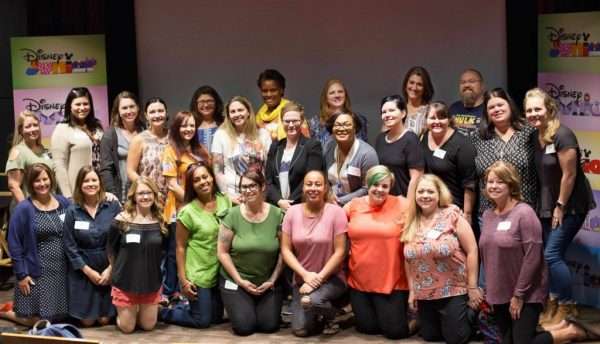 VAMPIRINA is so funny! As Chris Nee put it, “…maybe there’s a couple of jokes for you, but everything needs to work for the kids first.  But, if I give you guys something that’ll make you laugh along the way, I think it’s a great way to kind of make it a universal experience.”

It has great characters

The characters in VAMPIRINA are so believable, and that is a hard thing to accomplish when the whole premise of your show is about a vampire family moving from Transylvania to Pennsylvania!

Vampirina, or Vee, is voiced by Isabella Crovetti, and she is amazing! Chris Nee talked about how amazed they were the first time they met Isabella and heard her sing: “…she just opened her mouth, and we could have taken the first take. She’s a Broadway level singer who happens to live in LA and we get to take advantage of that.”

I asked Chris Nee about that aspect of Poppy’s personality, and she shared this: “…the show feels very 2017 to me. It is a show where we say, ‘She is different and sometimes that’s hard to be friends with.’ We’re not saying that she isn’t different. We aren’t saying that everybody’s exactly the same, and there’s never stuff that isn’t being conveyed as a conflict because we’re coming from different perspectives. In fact, we’re saying that’s exactly what this is, and yet you can still be friends. It’s important to be friends. It’s important to see each other from your perspective.”

She went on to say, “Poppy’s such a great character because she’s such a good friend, but it’s Bridget who struggles every single time. Yet she loves her friend, so she’s gonna keep facing the stuff that’s hard for her.  And you know, honestly we need a little more of that in this world, facing the stuff that is different.” 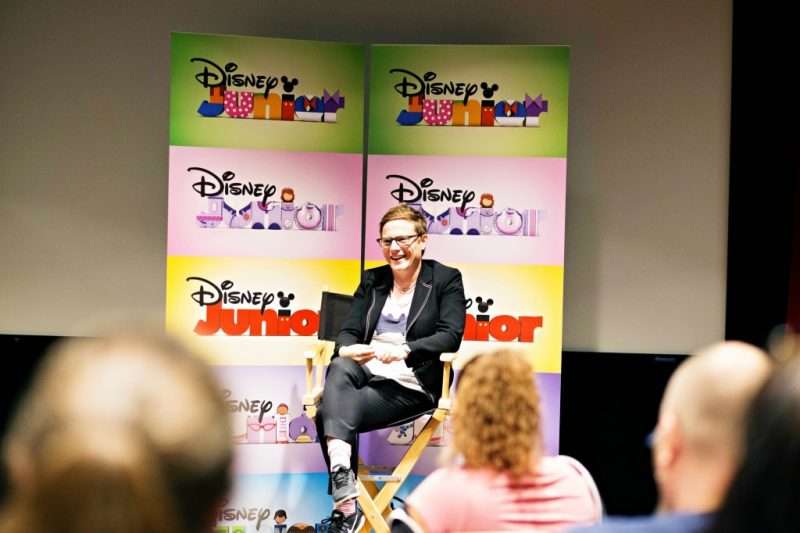 Gregoria and Demi, though not part of the VAMPIRINA books, are a huge part of the show. “I added [Gregoria and Demi] to the cast because there’s a lot that’s not [in the books] in terms of building out a world that you can tell X amount of stories every week. I really wanted the comic relief, and I really like intense specificity of character…where everyone’s really solidly who they are.”

Chris Nee wrote the part of Gregoria specifically for Wanda Sykes, not even knowing if she would take the part.  “I wrote Gregoria for Wanda [Sykes] having no idea she would say yes. That character was the biggest leap of faith because she’s a very cantankerous character for a preschool show. There were moments where I had to say, ‘I promise you it works in my head, it works in my head.’ It’s gonna be her with this voice, and Wanda’s voice is Wanda’s voice. And there’s no missing that–. And Demi is delightful to write for.”

Vee’s parents, Boris and Oxana, are played by James Van Der Beek and Lauren Graham. Boris is hilarious. He loves being in on everything, and he’s a fun dad. One of the biggest things Chris Nee wanted to get across to viewers is that this is a loving family.

“I love this family and I love seeing a family that feels really real to me. In animation sometimes, it’s hard to have characters touch each other. And so, just the amount that the parents hug each other, like you actually believe that they’re together which sometimes you don’t in weekly animation. We got so lucky with the cast; there’s just such a warmth to the family.”

Last, but not least, is Edgar. Edgar is Poppy’s brother who provides much “relevance” to the show. I put it that way because he is SO 2017. He walks around with his phone taking videos and photos constantly. In one episode, he talks about going “viral.” It just cracks me up because he represents this generation very well. He’s just a great character all around.

Since I touched on this fact earlier, so I won’t go into it too much again. I just love the fact that Chris Nee wants this to be a show that parents will watch with their children rather than a show that separates families. I get it. Sometimes you just want to catch up on your DVRd shows and let your kids do their own thing. No big deal. But finding shows to watch with your kids can be difficult. I’m glad that people like Chris Nee are mindful of that fact.

She’s not only created a show that you’ll enjoy watching with your children, but she’s also created a show based around a close family with loving characters.

It shows that different is acceptable

We are all different from each other, and that is okay! If we were all alike, this would be a pretty boring world. I love that VAMPIRINA has this family who have totally different customs and games and foods, yet they’re accepted. They’re not people to be afraid of. In fact, one of the issues Chris Nee hopes to address in the show is fear.

“I think fear is actually the greatest emotion that controls our lives, honestly.  And I think, for little kids, there’s so much that’s new for them, and so it’s easy to talk about the show from the perspective of, ‘She’s really different and her friends have to figure her out.’  But, she’s also in this world and she’s the new kid and she’s the kid who also knows she doesn’t quite belong.”

“[Vee] doesn’t want to give away all of who she really is, but [she] also wants to fit in.  And we’re gonna see a lot of…her trying to understand what her identity is. Is she Pennsylvanian now? Is she Transylvanian? Is she allowed to be both at the same time? And how do you own that?” 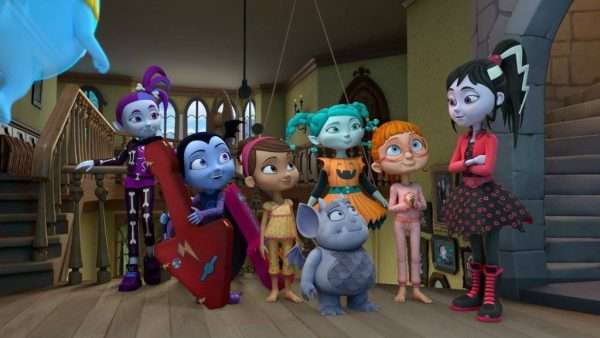 The episodes we screened before interviewing Chris Nee are the upcoming October 27th episodes! You will love The Ghoul Girls and Game Night! The Scream Girls, from Transylvania, are performing in front of Vee’s neighbors and friends, but Vee worries about the “big finish” since it’s a bit different than what these Pennsylvanian friends are used to. AND Vee, Poppy and Bridget form their own band, The Ghoul Girls. 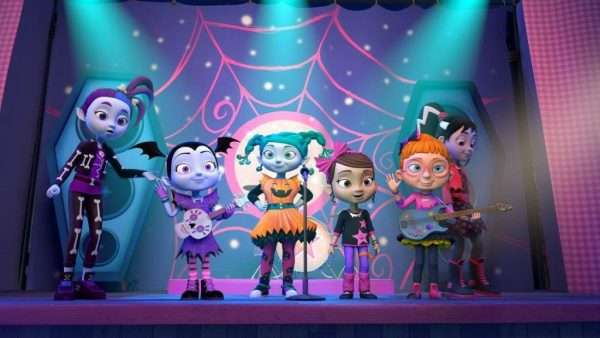 Check out this featurette about the upcoming episode.

This is definitely one of my favorite things. VAMPIRINA promotes kindness and sharing. In fact, you can download a free “Choose Kindness” guide right from Disney Junior. I got one of these during my press trip, and it is such a great resource to use with your kids.

If your little ones are loving this show, they’re going to have these on their lists! 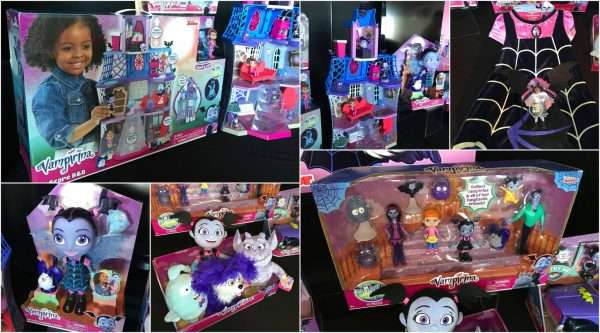 Get the Ghoul Girls DVD 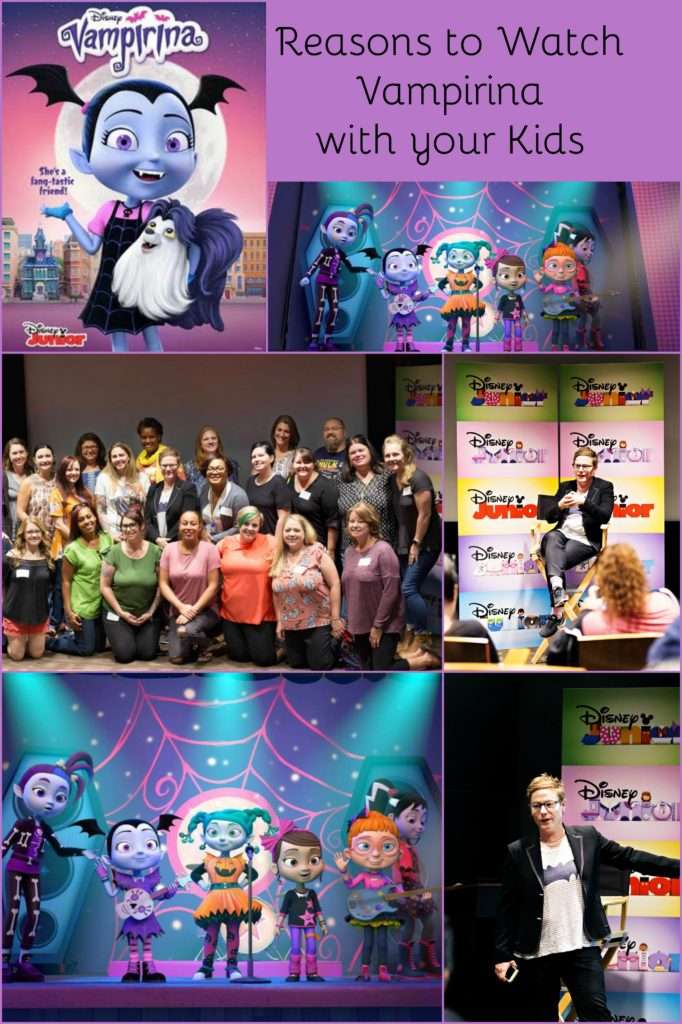 Thanks for sharing!
« Exclusive Interview with the President of Marvel Studios: Kevin Feige #ThorRagnarokEvent
Benefits of Becoming a Rover Pet-Sitter »