You are here: Home / Entertainment / Movies / Marvel / Hearing from the Cast: Thor: Ragnarok Press Conference #ThorRagnarokEvent
Thanks for sharing!

Thanks to Disney, I attended this press conference as part of the Thor: Ragnarok Event. 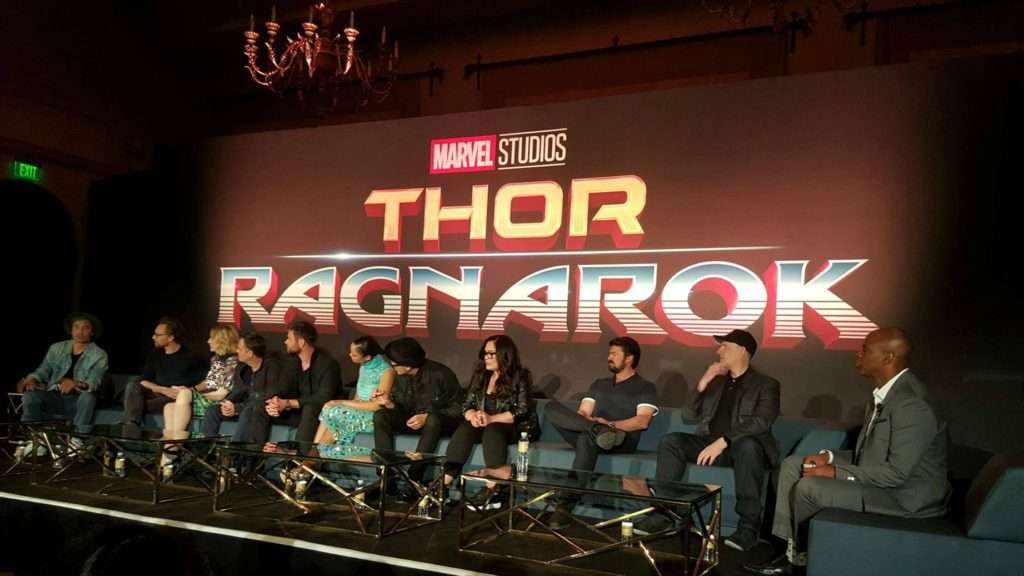 This was epic. Look at that couch…okay, now look at who is sitting on that couch! I was in the same room with these people, and it was so cool.

The THOR: RAGNAROK event that I was so blessed to attend thanks to Disney was jam-packed with so many amazing opportunities. Being able to interview this cast was certainly a highlight. Though I didn’t get to personally ask a question of the cast, I loved hearing what others asked and the answers from the cast members. I did have questions, but I got several of them from my daughter’s 7th grade students. They were fun questions, but not “Stop the presses!” questions. Still, it was cute that they sent them with me. Maybe next time!

After we stopped clapping and cheering for the cast, the host got right into the questioning with one for Chris Hemsworth. 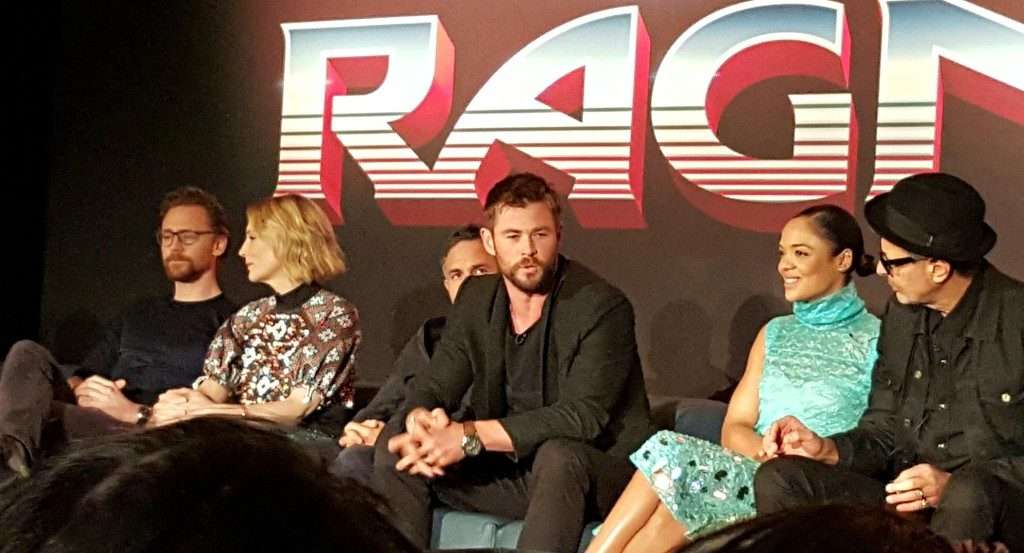 HOST: I want to start with Chris. Chris, what makes this Thor different from the others?

CHRIS HEMSWORTH:  “Taika Waititi, basically.  I think we all had a vision, and an idea, and a want to do something vastly different than what we’d done before, and take it to a different place.  And that meant kind of doing away with what we knew, and just reinventing it, and it all came from his crazy, wonderful brain, and his inspiration, and him pushing us every day on set, and constantly encouraging us to improvise, and explore, and take risks.  And it was one of the most enjoyable experiences I’ve ever had on a set, and a film that I feel the most proud of, just because of this – this whole team, and the collaboration, and fun we had.”

HOST:  And Taika, you kind of brought an independent sensibility to this monstrous film, and gave it fun, and a little heart, too.  What was the process like for you?

TAIKA WAITITI:  “I knew my strengths were just like tone, character, and you know, relationships, and things, and I had to ignore the scale of this monster, this beast, you know it’s a huge, huge film.  And what can be distracting on set is if you look over your shoulder, and you see 300 people standing there. I just had to keep reminding myself what’s more important is what’s inside the rectangle, and usually, it’s two or three people trying to remember their lines.  [LAUGHTER]  And so it doesn’t matter the scale of the film – that’s always the same, you know.  So I just focused down on what I was used to, which was what’s in front of the camera.” 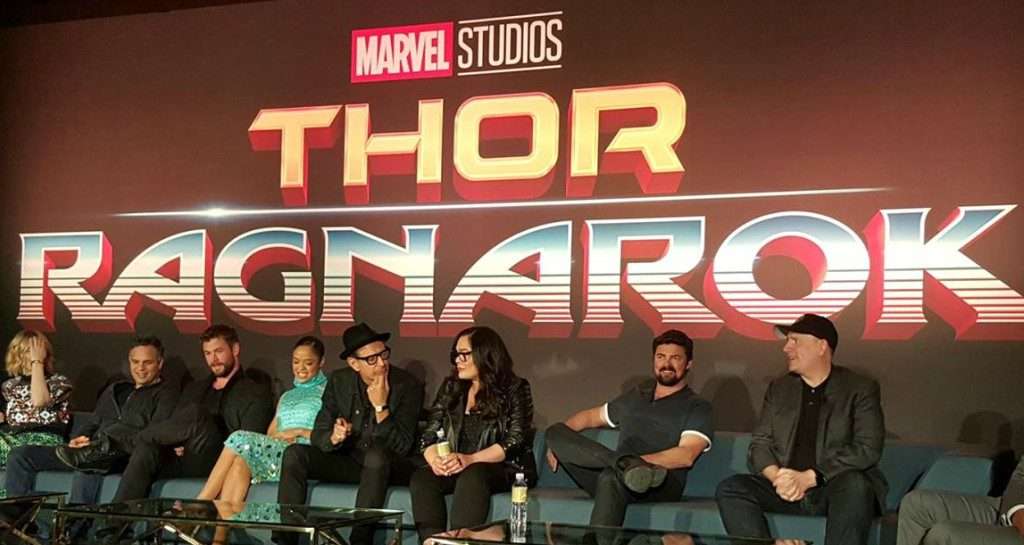 HOST:  It really was a fun movie. It’s a fun movie. You sit there and you’re like, ‘Kevin, you guys have done it.’  You’ve worked with Taika before, Rachel, right?

HOST:  So what’s the difference between ‘big movie’ and ‘little movie’ like?

RACHEL HOUSE:  Well, he’s a lot better dressed – [LAUGHTER] – because usually we’re running around in the mud, and the snow, and the rain.  So it was wonderful to come in each day and see Taika in a suit, and Italian leather shoes.

TAIKA WAITITI:  I didn’t have to make lunch for the crew on this one.

RACHEL HOUSE:  No, it’s been wonderful to see Taika so calmly and easily step into the helm of such a big, awesome film. 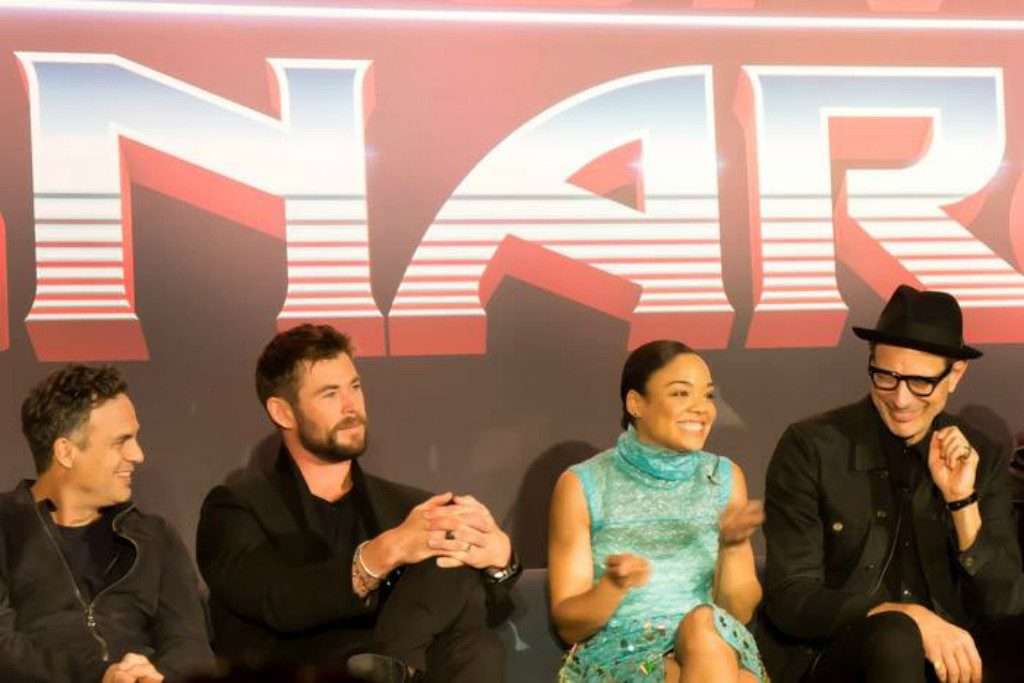 If you follow Tessa on Twitter, I’m sure you saw some of the ridiculousness about the Valkyrie being white and that Tessa shouldn’t be playing her. Well, one of the press asked her about that.

TESSA THOMPSON:  No, I didn’t feel any pressure with that specifically.  The things that I thought about the particulars of Valkyrie had more to do with, like mass and size.  For example, I thought, ‘Oh, I’m short,’ you know.   Or like, ‘I’m not buff enough.’  Or how she’s arguably as strong as Thor.  How do I stand next to a person like Chris Hemsworth and feel like that’s true?  So I didn’t think so much – I mean, satisfying Norse mythology, it’s mystifying, and fantastical, and glorious, and also very confusing and doesn’t make a lot of sense, you know.

TESSA THOMPSON:  And I remember someone online saying like, ‘You know, Tessa Thompson playing Valkyrie is white genocide.’  And –

TESSA THOMPSON:  Which is just as mystifying as Norse mythology.

TESSA THOMPSON:  I just figured this thing that I’m tasked to do with any character that has its own iconography is to capture the spirit of the character, and I think the spirit of all of us, at the risk of sounding, you know, cheesy, has very little to do with what color we are.  So I just didn’t really invest in that.

PRESS:  (To Cate) So how was it fighting with Chris?

CATE BLANCHETT:  I didn’t do enough of it. I kept wanting to do more.

CHRIS HEMSWORTH:  You wanted to hit me.

CATE BLANCHETT:  It was hugely enjoyable for me.  And apart from working with these guys, obviously, the chance to finally, in my deep middle age, to get fit, and to wear that much lycra was really exciting for me.

CATE BLANCHETT:  I had to manifest weapons, and I had to throw them. I could see Taika’s disappointment. As I threw it, I said, ‘Ha.’  And I had to stop making the noises, because I’d go, ‘Ha.’  And so I had to close my mouth.  Eventually Zoey suggested that I put some sugar, which was deeply humiliating, sugar packets in my hand so at least I could throw something and be real.  Zoey helped me with little things like that.  She was a great action director.  So I moved from the humiliating to the exhilarating in a matter of five days.

MARK RUFFALO:  I’m so glad you’re not the only person he looked at like that.

CATE BLANCHETT:  I know.  It was the suit that you were wearing.  It was really bad.

MARK RUFFALO:  He looked disappointed in me a lot. 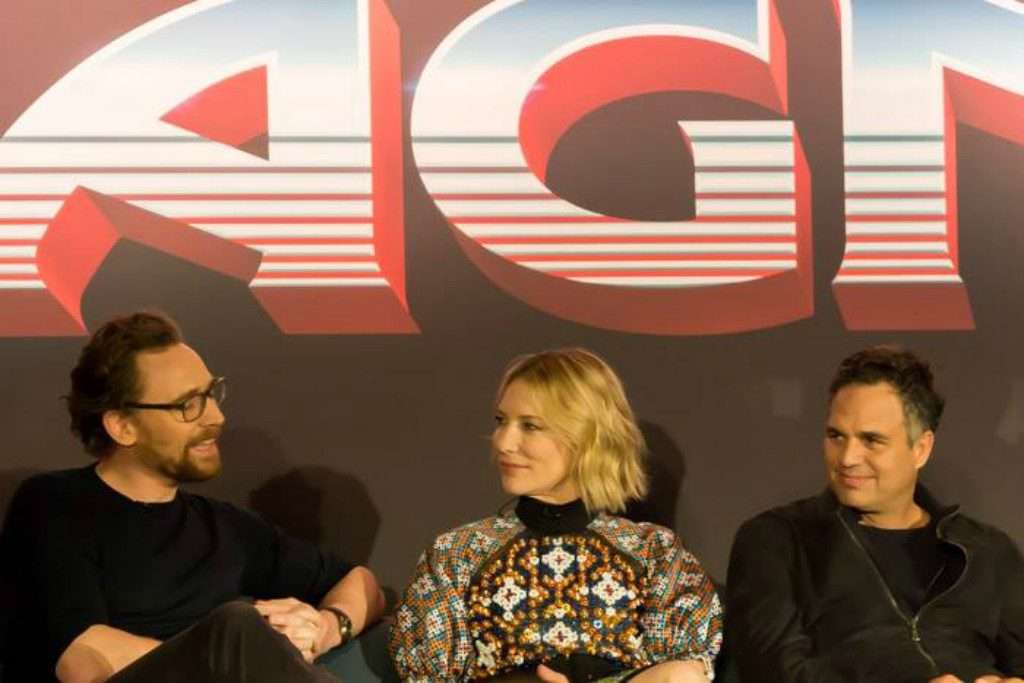 Now, I had about 10,000 questions for Tom thanks to his Twitter army, but there wasn’t time to answer them all. Here is what he did answer.

HOST: Tom, do you feel that, since there is a change in Thor, could there be a change in Loki, also? There’s a little of that that happens in this movie.  Do you think you could ever change or is there just a part of your character that won’t change?

TOM HIDDLESTON:  I did ask Taika if I could get a haircut, as well.

TOM HIDDLESTON:  But his answer was a quick, ‘No.’  It’s interesting.  I mean, in a way this film is about the development of the relationship between Thor and Loki. His brother Thor has evolved, and grown, and matured; and Loki in a way is stuck in his struggles of the past.  And that’s the challenge for Loki in this. He’s got to confront the fact that time is moving on and people change, so I don’t know.  We’ll see.  There’s room to grow, and I’m still here.  And we’ll see where he goes next. 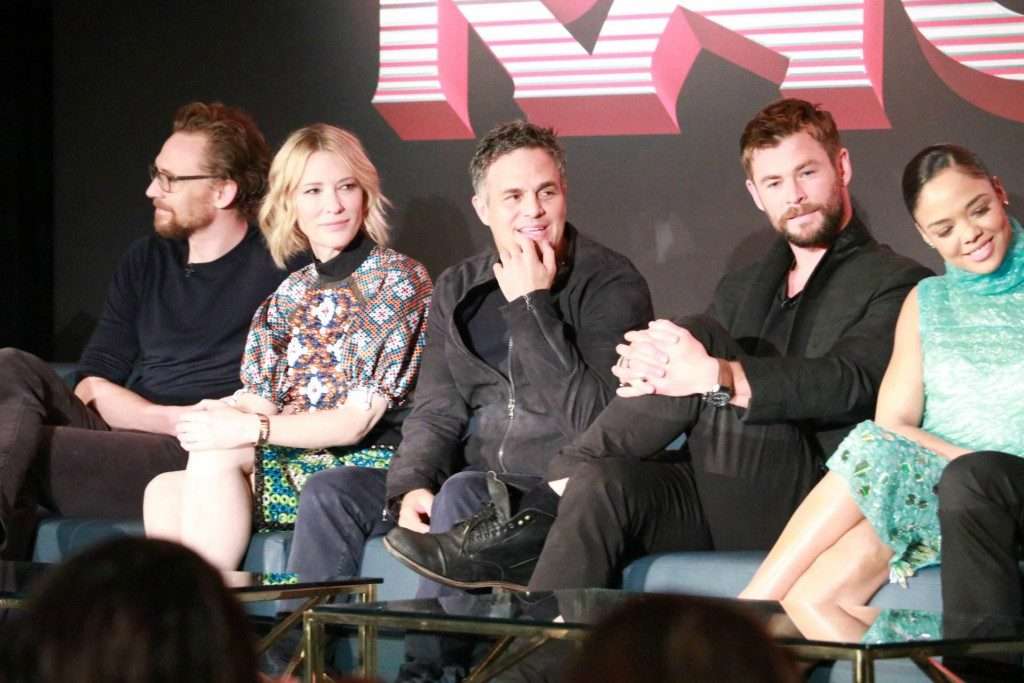 PRESS:  Mark, this is a question for you.  First of all, my wife is extremely jealous that I’m just in the same room as you.  [LAUGHTER]  But are you interested in all in doing a full Hulk movie?  This is the first time we’ve seen the Hulk this much.  And if so, what aspect of the character would be most interested in exploring?

MARK RUFFALO:  I would love to do a Hulk movie, and I think we all would love to do one.  But about a year ago, before I even had this part, or we were talking about doing this – it was well over a year ago, Kevin had asked me to come over and have a script meeting.  And basically he sat me down and he said, ‘What would you like to do if you had a stand-alone Hulk movie?’  I said, ‘I’d like to do this, this, and this; and this and this – and then this.  And then this, and this, and this, and then it would end like this.’  And he’s like, ‘I love that.  Let’s do that over the next three movies, starting with Thor 3 and carry it on through Avengers 3 and Avengers 4.’  And so that’s my stand-alone Hulk movie.

I just love Mark Ruffalo, so I’ve got to include this “Strongest Avenger” clip. Even though I’ve seen the movie, it still cracks me up!

All good things must come to an end…

The THOR: RAGNAROK press conference was so much fun. Listening to the banter among the cast brought such a “realness” to the movie. Obviously this is only a portion of the conference, but I’ve tried to give you a little bit of that feeling I had being in this room. It was amazing as is the movie. Get out to see it opening weekend!

Thanks for sharing!
« Christmas at Cade Ranch by Karen Rock
Our Family’s Race Across the USA Game & Christmas Book »