You are here: Home / Entertainment / Make Guardians of the Galaxy Cake Pops and Watch the Movie to Prepare for Infinity War
Thanks for sharing!

Unless you’ve been on a social media hiatus the past few days, you know that INFINITY WAR was moved up a week! The new release date is April 27th. Thank goodness I’ve already done 3 BLACK PANTHER posts…Don’t worry. I’ll squeeze in another with some INFINITY WAR tie-ins still. This is the week in the Marvel Movies to Watch before Infinity War where we watch GUARDIANS OF THE GALAXY! We’re going to make Guardians of the Galaxy Cake Pops too! 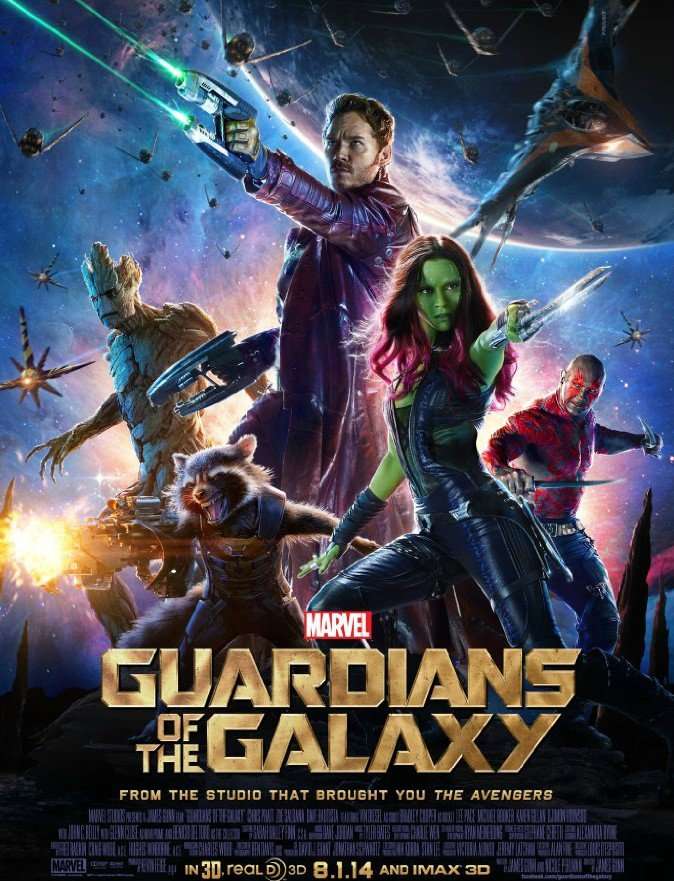 Guardians of the Galaxy

Raise your hand if you’ve listened to the GUARDIANS OF THE GALAXY Vol. 1 Soundtrack more than 20 times. Yeah. I’m raising my hand. It’s possibly one of the best soundtracks ever…maybe even my second favorite. My favorite is MARY POPPINS, but I digress. Before I delved into the wonderful world of Marvel, I wondered how in the world a movie with a talking raccoon and a tree that uttered only 3 words could be that great. HA! Fool that I was!

The first time I watched GUARDIANS OF THE GALAXY I fell in love with its characters, storyline, humor and soundtrack (duh!). There is so much I could say about this movie; but, as you know, I’m talking about how the movies in the MCU are leading up to INFINITY WAR. Though Thanos appeared at the end of THE AVENGERS, GUARDIANS OF THE GALAXY is the first movie where we learn a little about him. Thanos enlists the help of Ronan to acquire the orb which contains the power infinity stone. The entire movie centers around acquiring the orb, losing the orb, getting the orb back, and finally storing it safely on Xandar.

I am SO excited that these amazing characters will be in INFINITY WAR! I’m sure you’ve seen the trailer by now, but did you watch my reaction video? Yeah, I look like a dork, I’m not as animated as some lol, but my reaction was 100% genuine! I was so psyched to see them in the trailer!

Guardians of the Galaxy Cake Pops

If you haven’t made cake pops before, they’re really pretty easy to make. You’ve just got to play around with the amount of frosting you use to get the consistency right. My daughter is the baker in the family. If you haven’t seen her baking with Kylo and Rey, you’ve got to check it out.

For these cake pops, she used a white cake mix and mixed blue and red food coloring into the batter to get purple. Once the cake is cooled, you just cut it into big chunks and crumble it up. Fun, right? 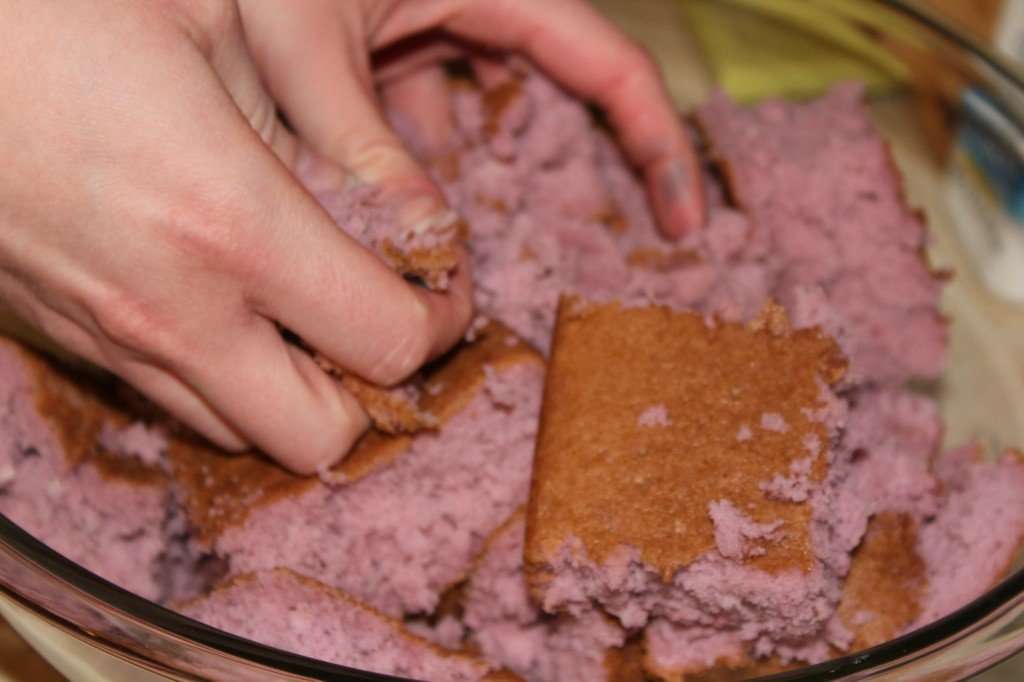 Then she mixed half a can of white frosting with more blue and red food coloring and added it to the cake. Starlord is guarding the deliciousness. 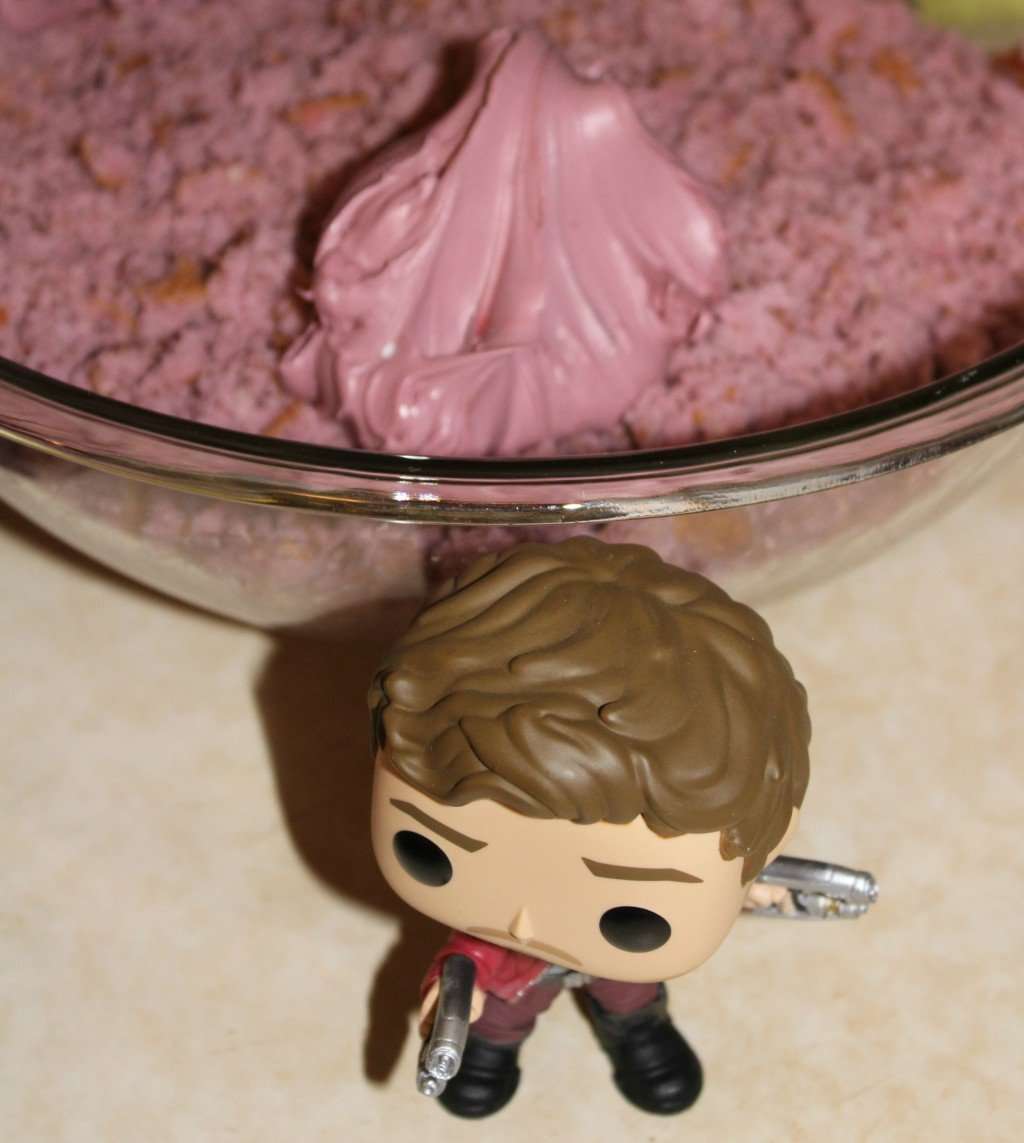 Then you shape them into orbs…er, balls…, dip the end of a candy stick in melted chocolate, and stick it into the orb. 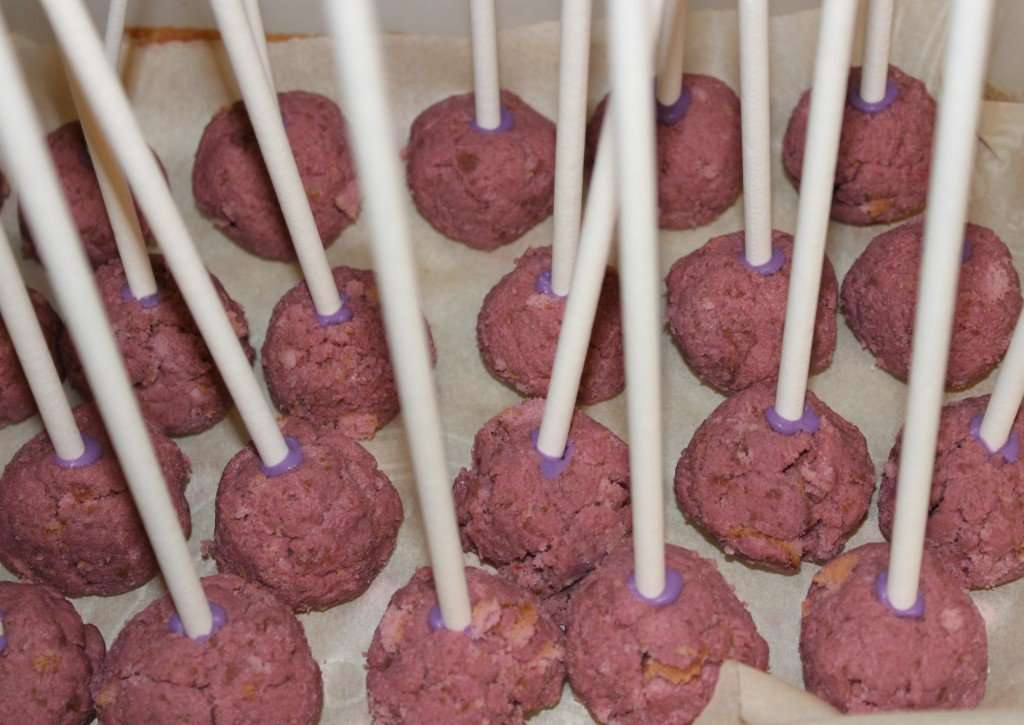 Once you’ve done that, you want to freeze them for at least an hour. This makes dipping them into the melted chocolate a lot easier. Take them out of the freezer and dip them into white chocolate with a bit of black food coloring to make it look gray. This was about the closest we could get to the orb’s color. 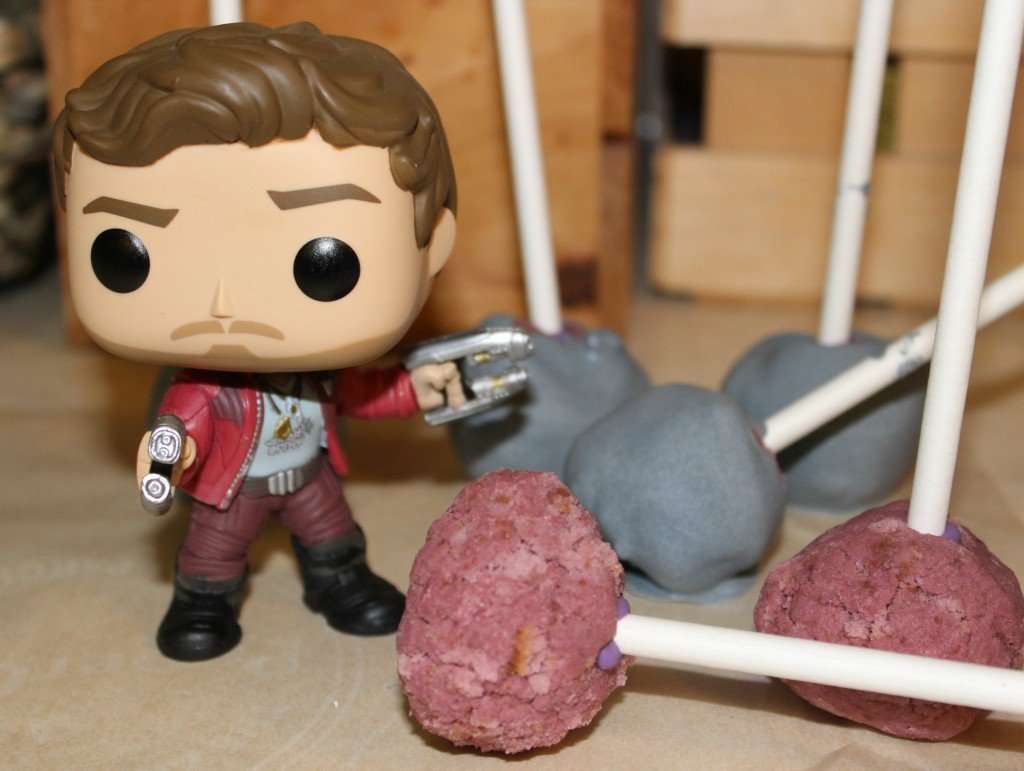 Starlord did a great job protecting these, but then Molly took them to her friends. Needless to say, the orb is no longer safe. They sure were tasty though! Have fun making your own GUARDIANS OF THE GALAXY cake pops, and then sit down to watch the movie! 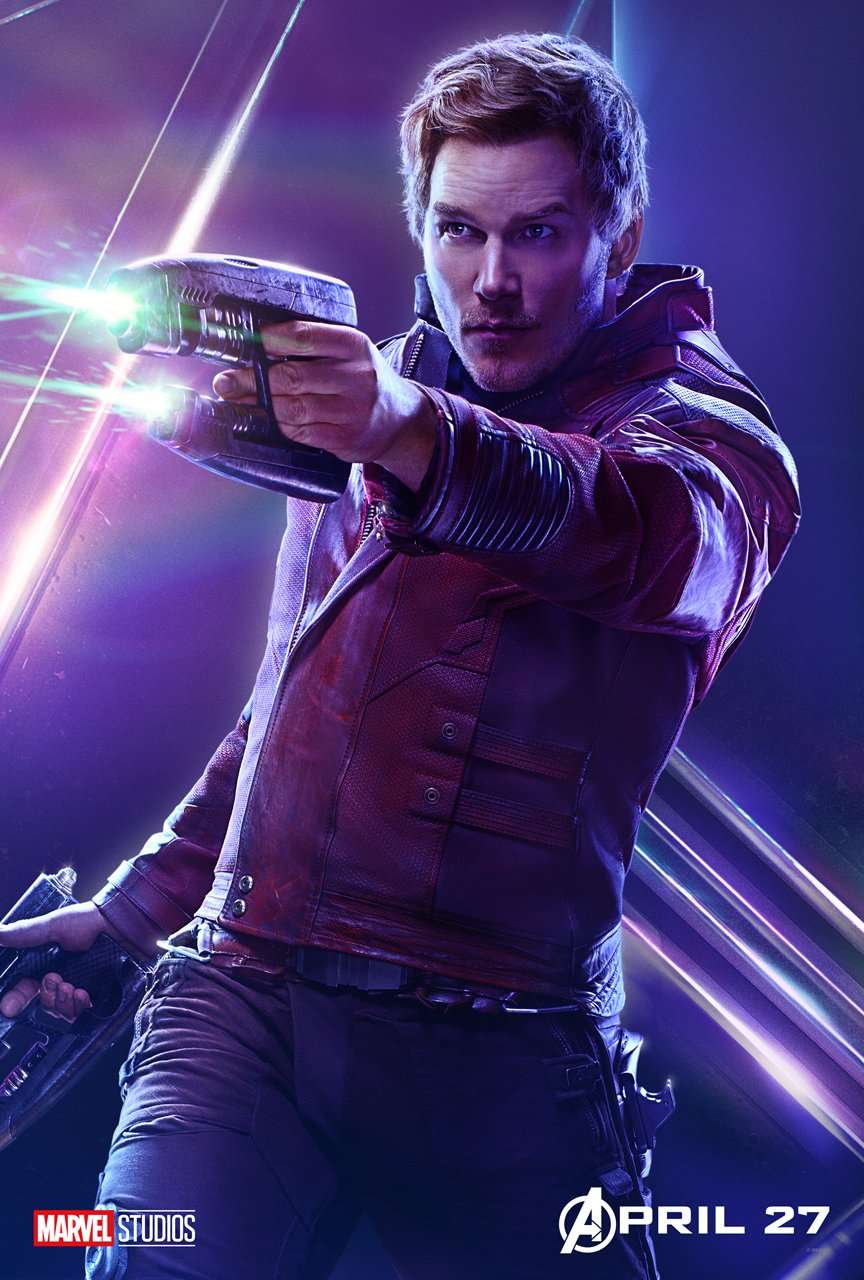 The road so far

We are ten movies into the Marvel Cinematic Universe this week. Which movie has been your favorite so far? We haven’t gotten to my official favorite yet, but so far, of the movies we’ve viewed together, GUARDIANS OF THE GALAXY is my favorite. You know Thor is my main man, but there’s just something about GOTG that gets to me. Check out my printable list if you’re not sure what we’ve watched so far! 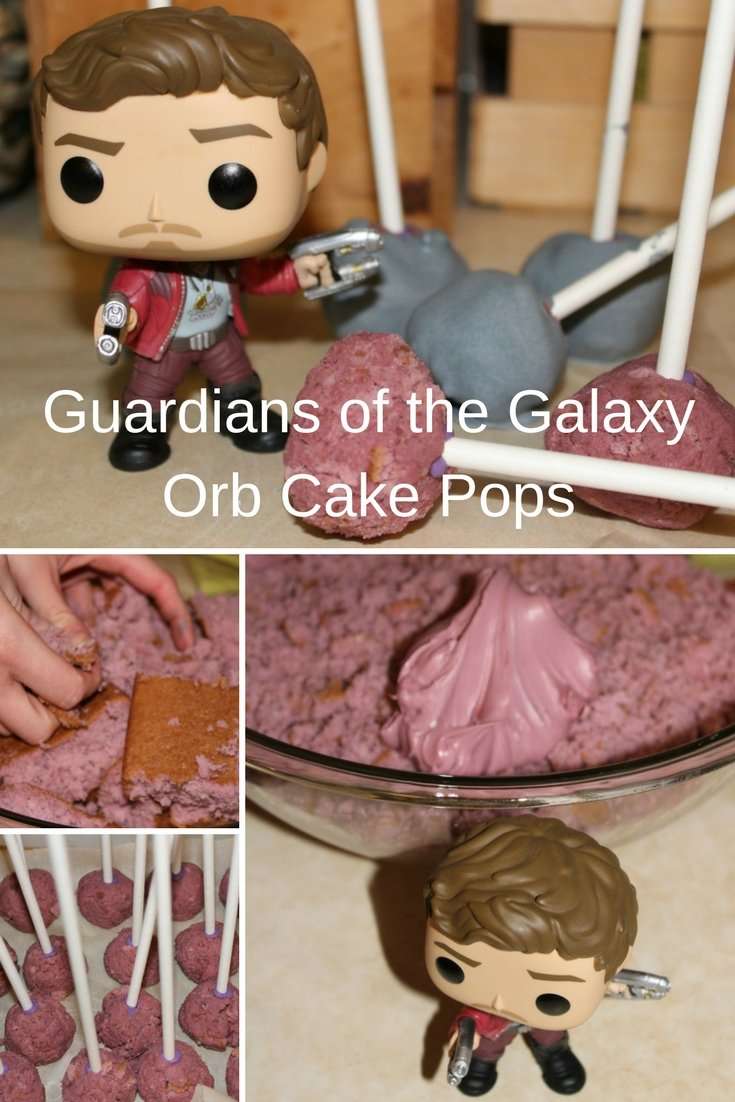 Thanks for sharing!
« Thor: Ragnarok with Bonus Features on BluRay and Digital Now #ThorRagnarok
Home Improvement on Your New Home »