You are here: Home / Entertainment / Exclusive Interview with Siena Agudong #AlexandMe
Thanks for sharing!

Warner Bros. Home Entertainment provided me with a free copy of the Alex & Me Blu-ray I reviewed in this Blog Post. The opinions I share are my own. 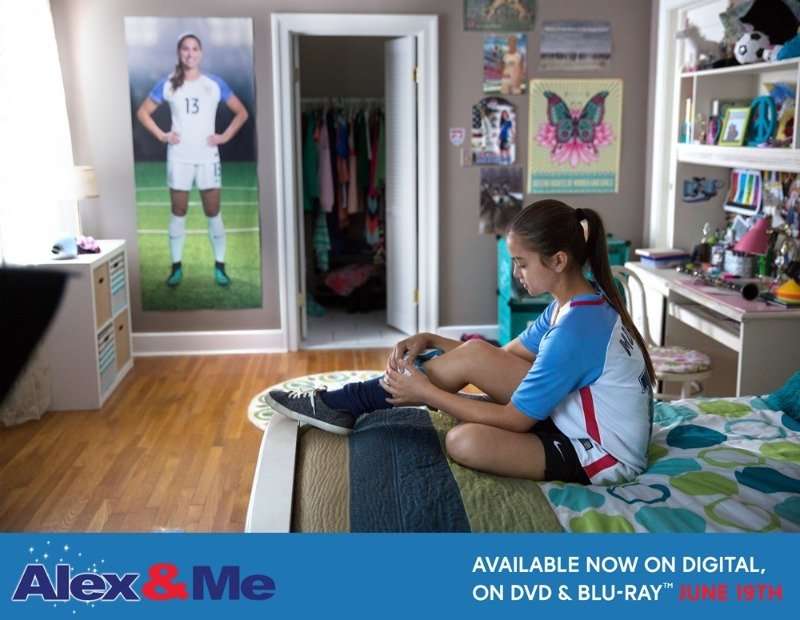 Teenager Reagan Willis (Agudong) has one dream – to play soccer like her hero, Alex Morgan. Her bedroom is a shrine to all things Alex, including a life-size poster of the Olympic gold medalist. Yet in the Willis house, Reagan lives in the shadow of her prep football superstar brother, Logan. When Reagan fails to make the cut of the premiere local soccer club team and is humiliated by her rival Claire, she’s certain her ship has sailed. But after accidentally hitting her head, Reagan’s poster of Alex Morgan suddenly comes to life and everything changes!

• Getting to Know Alex
• Aspire to Inspire: Success in Hard Work
• Soccer, Script to Set: A Playbook on Alex & Me
• Outtake

My Review of Alex & Me

ALEX & ME is such an inspiring movie for both kids and their parents alike. Its message about setting goals for yourself and working hard to meet those goals is one we should all listen to!

This movie is very well done, and Siena Agudong shines in her role. She doesn’t let the fact that she’s overshadowed by her older brother stop her from achieving her heart’s desire…to play soccer well.

I love the humor in ALEX & ME. When Raegan hits her head, Alex Morgan suddenly appears to her. Of course, no one else can see Alex, so the situations where Raegan is interacting with Alex when other people are around are very funny. I also love Jerry Trainor’s role in the film. He’s been a favorite in this house since the iCarly days. He plays a former “British” soccer player turned coach to a girls’ soccer team that Raegan joins after being rejected by the “big” team in town.

ALEX & ME is a great, family-friendly movie. Add this to your must-see movie lists this summer!

Siena Agudong was a delight to interview. She is such an inspiring young woman and role model for girls. If people take one message away from ALEX & ME, Siena wants it to be this: Hard work pays off, and you should never stop believing in yourself. Her character, Raegan, is inspired by this message given to her by her favorite soccer player, Alex Morgan.

Siena says that in order to build confidence you need to believe in yourself and trust that God has a plan for you. You’ve got to enjoy life and be yourself. Great advice, Siena! It’s okay to have role models, but you are you. You’ve got to put in the hard work to achieve your goals, and you’ve got to believe that you can do it even when it’s hard.

And it is hard! A couple of the most challenging things for Siena during filming were learning the soccer tricks and push-ups! Alex Morgan gave her the same advice…believe that you can do it and have confidence in yourself. Siena was able to learn the tricks and handle the push-ups by putting in the hard work needed. More hard work that Siena has to put in is her schoolwork! She’s got an on-set tutor, and she takes classes online. Her favorite subjects are science and Spanish.

In ALEX & ME, Reagan’s older brother, Logan, seems to take center stage, and Siena has to compete for her parents’ attention. In Siena’s “real-life,” her older sister Sydney is her mentor, and she doesn’t feel like she’s in competition with her. Sydney inspired her to take up acting. Siena says that Sydney has a beautiful voice and that she and her sisters (she has 3 sisters) support each other. You can tell by the confidence Siena shows that she’s got a lot of support from her family.

Siena certainly is a wonderful role model, and I’m sure she’s got a very bright future.

• Create your own Soccer Emoji and share it with the world! Pick your player’s look, signature move, and fun tagline.
• Setting goals is key to success, and the sooner your kids learn that the better they’ll be prepared for life. Download the Family Goal Chart and have your kids set and mark off goals.

Born in beautiful Hawaii in 2004, Siena Agudong is paving her way in the entertainment industry at just 13 years old. She has captivated audiences through her performances, whether it be on stage or on screen. Her first break was in 2014 when Siena portrayed “Lulu Parker” through her recurring role on ABC’s Texas Ranger drama, “Killer Women”, which aired in early 2014. She has since been a steady guest star on Nickelodeon’s “Nicky, Ricky, Dicky, and Dawn” as well as playing “Tiffany” in her recurring role on TVLand’s “Teachers”.

With her love of theatre, she dominated the stage as the “Wicked Witch” in the “Wizard of Oz”. Her passion for acting has earned her several Young Entertainer and Young Artist Award nominations in 2015, 2016, and 2017! In spring 2017 she Won her nomination and was awarded “Best Guest Starring Young Actress 12 & Under”. Through her active lifestyle and ambition, she is a role model to all young girls. Most recently, Siena has wrapped filming for her starring role in “Star Falls” which premiered, March 31 on Nickelodeon.

An Olympic Gold Medalist and FIFA Women’s World Cup champion with a penchant for goal scoring, Alex Morgan is one of the top soccer players on the planet, currently playing forward for the United States Women’s National Team and the Orlando Pride of the National Women’s Soccer League. Away from the field, Morgan is also an accomplished author of “The Kicks” series, a collection of chapter books filled with wonderful messages of empowerment for young girls. The first The Kicks book, “Saving the Team,” debuted at No. 7 on the New York Times Best Seller list.

Each household is only eligible to win Alex & Me Blu-ray via blog reviews and giveaways. Only one entrant per mailing address per giveaway. If you have won the same prize on another blog, you will not be eligible to win it again. Winner is subject to eligibility verification. Open to US only. Giveaway ends 6/30 & winner will have 24 hours to provide mailing address since all winners will be verified by 7/2. Void where prohibited by law. By entering this giveaway, you’re agreeing to these rules and the privacy policies on this blog.a Rafflecopter giveaway