You are here: Home / Books / The Proctor Hall Horror by Bill Thompson | Book Excerpt
Thanks for sharing!

The Proctor Hall Horror is the latest installment in Bill Thompson’s Bayou Hauntings series. This book takes readers down to Thibodaux, LA for a traditional ghost story bound to keep you up at night. Several blogs are participating in a tour for this latest book by Bill Thompson. Be sure to keep reading to enter a giveaway for this book and check out the sale below for books 1-6! You can get them ALL for $1.99 now through 10/16! 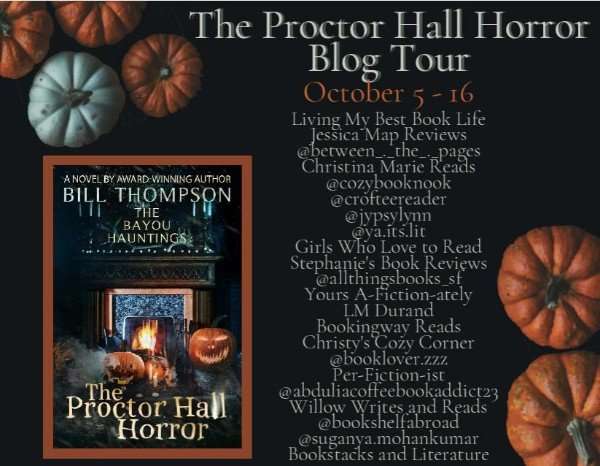 Could 14 year old Noah Proctor have slaughtered his family in their beds, arranged their bodies on the couch and put their heads on the mantle?

Everyone in town thinks so, but Noah’s not talking. 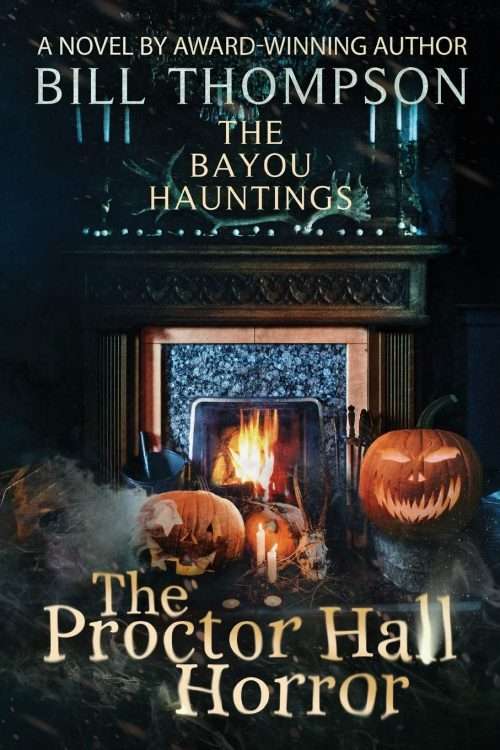 Proctor Hall is one of Lafourche Parish’s oldest sugar cane plantations. After Noah murdered his parents and little sister in 1963, he went away to an institution while caretakers maintained the place. Twenty-six years later the man who never spoke returned home. A girl disappears and people believe Noah’s up to his old tricks.

Four college students visit the now-abandoned farmhouse as part of a class project, and they fall victim to whoever – or whatever – still resides within its walls. Famous paranormal investigator Landry Drake conducts a séance there, uncovers long-hidden secrets and learns that the horror of Proctor Hall is still at work.

With a familiar investigative team fans of The Bayou Hauntings have come to know and root for, Thompson once again uses his signature spine-chilling style to hook readers on a supernatural adventure paranormal fans will love. “I believe there are many things in history and in this world that cannot be explained by traditional means,” he says. “There are good forces and bad that exist in those old Louisiana mansions and buildings. I’ve seen it, I felt it. I can’t explain it, but I know they exist.” 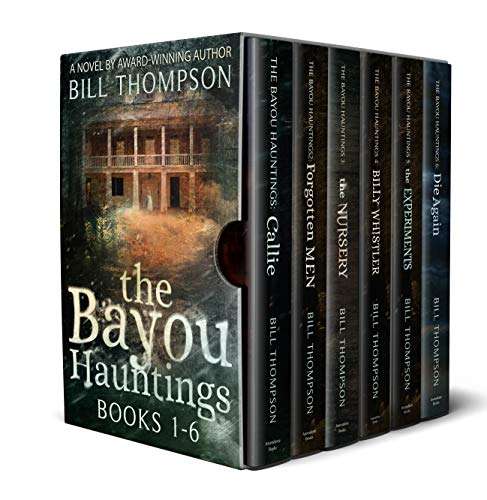 “What’s the most haunted plantation home in Louisiana?”

“The Myrtles in St. Francisville.”

“A logical choice,” Dr. Girard said, asking the class who agreed with her. As usual, the vast majority chose it too. Only three had other ideas.

They always pick the same ones. “You’ve made four excellent choices, but the title ‘most haunted’ depends on who you ask. Every Louisianan has an opinion, and if you ask a hundred people, you’ll get a variety of answers.

“Here’s my idea. The most haunted plantation house in Louisiana is Proctor Hall in Lafourche Parish. Not many people know about it.”

He flashed a picture on a screen. “As you can see, it’s not a beautiful old mansion like the ones you just mentioned. It’s a farmhouse on a plantation along Bayou Lafourche.

“Proctor Hall was the scene of one of the most grisly mass murders in the twentieth century and the most horrific ever in that parish. Here’s your assignment for the weekend. Research the story, find out as much as you can about what happened there, and turn in a report on Monday. There’s more to the story of Proctor Hall than you might expect, so the top grades go to those of you who dig the deepest. We’ll discuss it then.”

As the students filed out of Julien Girard’s classroom on the third floor of Tulane’s Hebert Hall, he considered which of them would do the minimum on this project and who would really embrace it. There was plenty about what the press dubbed the Massacre at Proctor Hall, but almost nothing about the other eerie things that had happened there over the years. The only A’s for this assignment would go to those who learned more than the obvious.

After teaching history for twenty-eight years, Julien knew almost every tall tale and spooky story there was. But when he created a course called Appreciation of Louisiana Culture, he’d found his true calling. For the past three years he’d been enchanting his students with the legends of Cajun country. Julien was a master storyteller, and every semester there was a waiting list of people who wanted to take his course. His rugged good looks and black hair pulled back into a ponytail didn’t hurt his popularity with the coeds either.

The part of his job he loved most was preparing his curriculum for the next semester. He spent summers driving the back roads of southwestern Louisiana, exploring old houses and hearing about mysteries and ghosts. In town after town, he listened to stories from ordinary people who claimed to have witnessed unexplainable events. All that research ended up as fodder for his students to ponder.

Although it had happened a few years before he was born, Julien knew every detail about the Massacre at Proctor Hall. It fascinated him to watch his students dig into the mysteries there. Would they turn up all the secrets the old house held? Not a chance. Nobody ever did, because they’d been so well concealed all these years.

On Monday morning, his students drifted back into the classroom. He could tell from the looks on their faces who had enjoyed working on Friday’s assignment and who gave it the usual “just enough to get by” effort.

“I hope everyone had a great weekend,” he began. “And I hope you found researching Proctor Hall intriguing. It’s one of my favorite stories. Is there anyone who didn’t do the assignment? Dog ate my homework? I had the flu? My mother grounded me and I couldn’t use the computer?”

Everyone laughed, but no one raised a hand. That was always gratifying. At least they all tried.

“Who thinks their research is best? Who among you thinks you’ll get the top grade today?”

One hand shot up before he’d finished the first question — Marisol de Leon’s. No surprise there. Over the years, a variety of students had passed through his classroom and his life. Underachievers, overachievers, those who struggled, the cocky, the shy, those who loved his subject, and those who took it to fill an elective and graduate.

Marisol had a classic type A personality — driven, ambitious, ruthless and determined to be best at whatever she did. Naturally she’d consider her work the best. And it probably was, but he had to be fair to the class.

“Okay, Marisol, we’ll save the best for last.” He and she laughed, but the others didn’t. Early in the semester they had tired of her ego trips. By now it was fifteen against one — the class against the beautiful, sultry senior from southern California.

“How about you, Andy?” Girard asked, looking at the only other senior in his class. Andy Arnaud slouched in his chair, chewing on a toothpick and exhibiting his trademark “don’t give a shit” attitude.

Andy was one of those who did just enough to get by. He was here for one reason. His parents wanted him to have a degree. Andy couldn’t care less because he wouldn’t be job hunting after he walked across the stage. His father owned a dozen car dealerships across the state. Andy’s folks were what wealthy people in the deep South called “new money.” It wasn’t a flattering term.

“I looked it up like you said,” the boy replied. “Old house, kid kills his whole family, he’s nuts so they can’t fry his ass, yada yada yada. That’s the ten-second version of Proctor Hall.”

“If minimizing the horrors of Proctor Hall had been the assignment, you’d be the winner for sure,” Julien snapped, but why get angry? Andy wouldn’t change, and he wasn’t worth the effort.

He listened to summaries from a few more before asking the big question. “How many of you came across the name Marguey Slattery?”

Eight hands went up, Marisol’s first and highest. Half the class.

“Okay. Now here’s a question for those who didn’t come across Marguey’s name. Don’t yell out the answer. Raise your hands. Who killed the three members of the Proctor family in 1963?”

As he had expected, all eight students raised their hands. And six out of eight fell for the trick question, just like they did every semester.

Julien asked the other two, “If Noah didn’t do it, who did?”

“Nobody knows who killed the family,” they said, and they were right.

Julien said, “Six of you answered as most people would, but the facts are clear. Noah was never charged and never convicted. You drew a conclusion from an improper basic premise. If everything else in the report you turn in is right, I’ll give you a C, but that’s the best you can hope for.”

At last he called on Marisol. “You think your report’s the best. Tell us the story of Proctor Hall.” 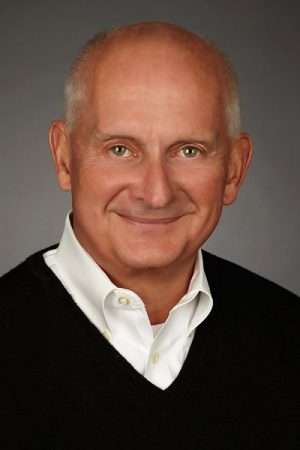 BILL THOMPSON is an award-winning author of The Bayou Hauntings series, along with The Brian Sadler series, The Crypt trilogy, and The Outcasts. After starting and running what would become the one of the largest insurance agencies in Oklahoma, he traveled across the world to explore archaeological finds, mysteries of the past, unexplained things in the jungle and stories of adventure in remote places.

Thompson currently resides in Dallas with his wife and their two dogs. Learn more about The Proctor Hall Horror by visiting Thompson’s website, and connect with Thompson on Facebook and Twitter.

One winner of The Proctor Hall Horror by Bill Thompson

This giveaway is open to US and Canada ages 18+. This giveaway is void where prohibited. By entering this giveaway, you’re agreeing to the privacy policies of this blog. Entrants need a profile picture on their social media accounts from which they’re entering, or entry will be void. One entry per household. The winners have 48 hrs. to claim the prize or another winner will be chosen.